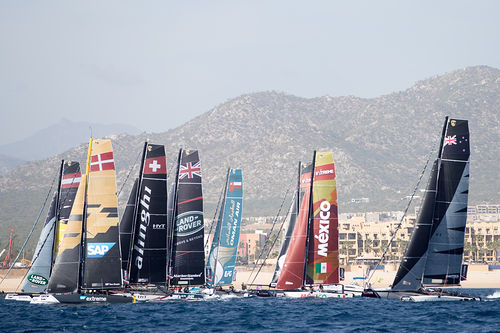 Seven international teams will take to the water for Act 1 of the 2018 Extreme Sailing Series in Muscat, Oman, from 14-17 March.

In the first of eight exceptionally tough events, 35 elite competitive sailors will battle it out on the stunning Omani waters before the Al Mouj Golf course, striving for an Act 1 victory under the Middle Eastern sun.

Determined to secure the Series title, the teams will fight tooth and nail on board their super-fast foiling GC32 catamarans to prove themselves in the first stage of the Stadium Racing championship, now in its 12th year.

The British star, who will take the helm for Land Rover BAR Academy, believes this year's Series will be one of the toughest to date: “The competition is going to be really high this year; I think maybe one of the highest standards we've seen on the circuit in a long time; everyone has to be consistent over the season when it's such a strong fleet.”

Kiwi sailor Adam Minoprio, helm for SAP Extreme Sailing Team, agrees: “This year looks like it's going to be the toughest year in a long time. The line-up is going to make for some great racing – consistency is what will win the championship this year.” Having emerged triumphant in 2017, the Danish-flagged syndicate returns for its seventh Extreme Sailing Series, determined to top the podium once again.

Hoping to snatch back the title from SAP Extreme Sailing Team, three-time victors Alinghi are also back on the circuit. Returning with the same crew as last year, co-skipper and helm Arnaud Psarofaghis is keen to hit the water in Oman: “Muscat is one of the best Acts of the season – the conditions suit us well. We have the same crew in place as last year, so we already have the chemistry amongst the team to get results.”

Among the 2018 challengers is Team México – a wildcard entry in Act 8 of the 2017 Series. The team returns this year with a crew roster that includes of some of Mexico's best sailing talent, such as skipper Erik Brockmann – a J70 World Champion and once ranked in the top-10 in the world in Optimists – and bowman Danel Belausteguigoitia.

Home syndicate Oman Air will be looking to climb the ranks from its 2017 third place podium finish. Skipper and World Match Racing Champion Phil Robertson is raring to go: “We're pumped and ready for the fight in 2018, ready to race on home waters as Team Oman Air. We're determined and committed – we can't wait for battle to commence in our home town of Muscat.”

Two further teams competing in Act 1, Muscat will be announced in the coming week.