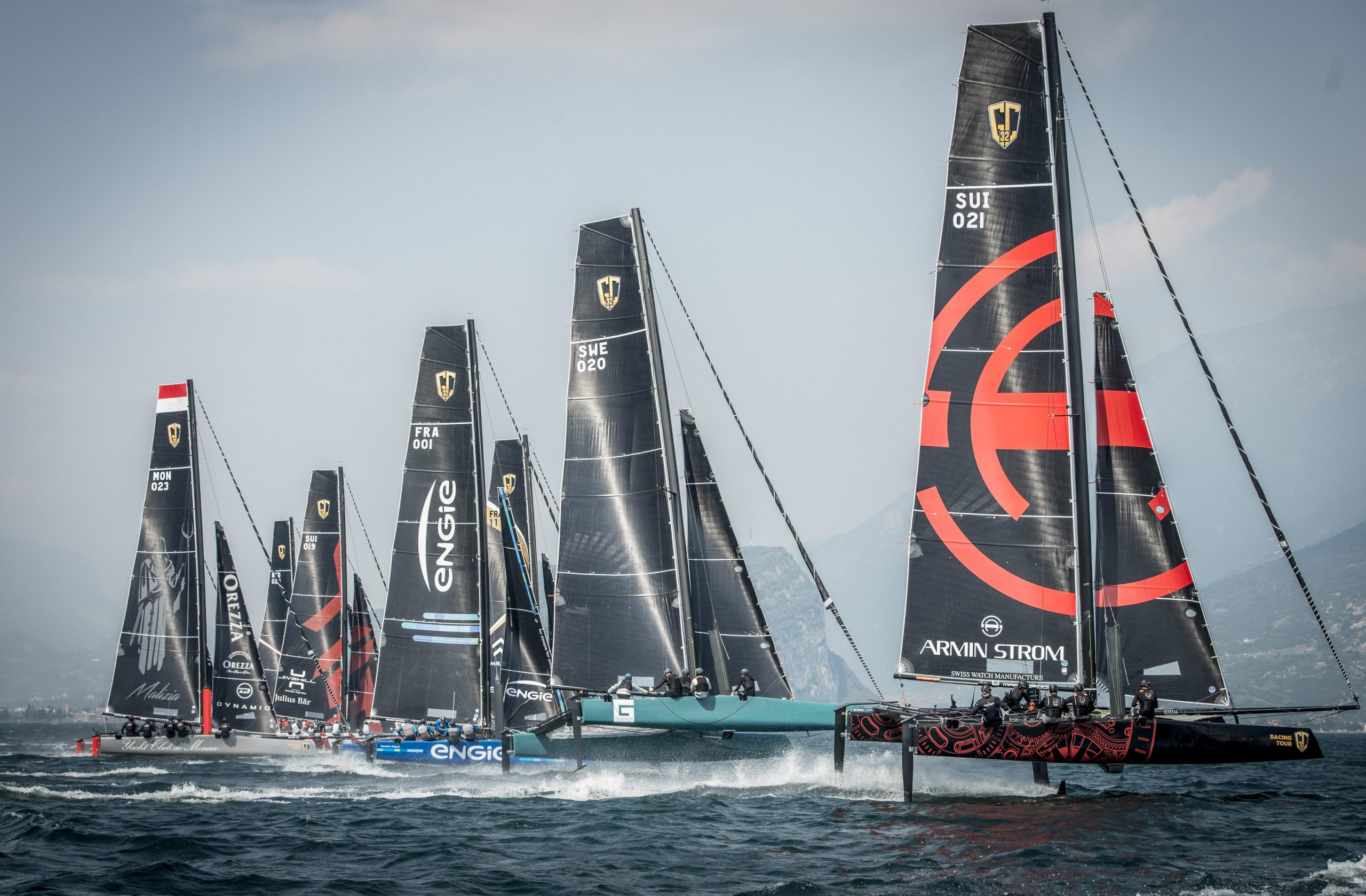 After winning May’s GC32 Riva Cup and the opening day of the GC32 Malcesine Cup yesterday, Franck Cammas and NORAUTO’s domination of the GC32 Racing Tour finally came to an end today. The Swiss crew on Team Tilt put in an exception performance to end the second day of competition one point ahead of the Volvo Ocean Race winner’s French team.

In the first regatta of the season at nearby Riva del Garda, Team Tilt finished second, 13 points behind NORAUTO. Since then regular skipper, Sébastien Schneiter, has temporarily stepped down to focus on his Olympic campaign for Rio, handing Team Tilt’s helm over to leading Swiss Moth and foiling catamaran sailor, Arnaud Psarofaghis.

“We had a really good day and a really good fight with NORAUTO,” said a beaming Psarofaghis. “We fought hard and the boys did a really good job on board. We improved a lot from yesterday when I wasn’t starting so well. Last night we studied the video and I tried to make it better and everyone’s life easier.”

The homework clearly worked with Team Tilt scoring a consistent 1-1-2-2 across today’s races. Psarofaghis also admits that worth his weight in gold on Team Tilt is Emirates Team New Zealand skipper and nine-time A-Class catamaran World Champion, Glenn Ashby: “He is keeping everyone calm and giving really good information on trimming and tactics. It is a big plus to have Glenn with us.”

Today racing off Malcesine, on the middle of Lake Garda, was once again exceptional with the southerly Ora wind up into the high teens by today’s first race and gusting into the low to mid 20s by the close of play, late in the afternoon. This regatta has the biggest fleet of GC32 one design foiling catamarans ever assembled and seeing the ten boats jockeying off the start line towards the reaching mark at speeds of 30+ knots  has the same heart-in-mouth tension as the first corner of a Formula 1 Grand Prix.

“Conditions were great,” agreed Psarofaghis. “It was a bit shifty, which was good to keep the game open. And everyone fought hard. When the wind gets up to 20 knots you start to really get going and you also have to make the decision about whether you go with the jib or the gennaker.”

Following Team Tilt’s opening two bullets today, race three was claimed by GUNVOR Sailing, on which legendary Italian sailor Francesco Bruni has taken up helming duties for this regatta. Race four was won by NORAUTO, but this was not enough for Cammas’ team to recover the lead.

While just one point now separates the two frontrunners, the crew on Mamma Aiuto! are among those still learning the ropes on their GC32. With Japanese owner Naofumi Kamei not on board for this regatta, Spain’s Manuel Weiller, usually tactician and mainsail trimmer, has temporarily taken over helming duties.

“There is a lot of adrenalin, more than I thought there would be, especially at the first reaching mark roundings, which are spectacular,” said Weiller. “We are having a lot of fun and we are doing better than expected.”

With the breeze building along with the adrenalin, so in today’s fourth race there was a collision between Team ENGIE and Realteam, in an incident also involving Mamma Aiuto! The jury hearing for this is scheduled to take place tomorrow morning.

Ahead of tomorrow’s hearing, Team ENGIE skipper Sebastien Rogues was unwilling to discuss the incident. “We started the day well with two beautiful races and are happy about the day,” he said. “We will do the maximum to make sure that everyone is sailing tomorrow.” Damage to Team ENGIE is minimal, while there is hole on the inboard side of Realteam’s port hull aft that will be repaired overnight. Both boats were forced to retire with Realteam immediately headed to the travel lift at Malcesine’s Simone Lombardi Marina.

A more serious incident occurred in what started as today’s fifth race when Pierre Casiraghi’s Malizia-Yacht Club de Monaco suffered a capsize as the result of a collision with a RIB. During the incident the boat fell on its side causing Malizia’s crew to fall into the water. Fortunately all were recovered uninjured. Following the incident, the race was cancelled.

Racing resumes on Saturday, the penultimate day of the competition, with a non-scoring long distance alongside the other participants in Foiling Week, followed by two or three regular races.