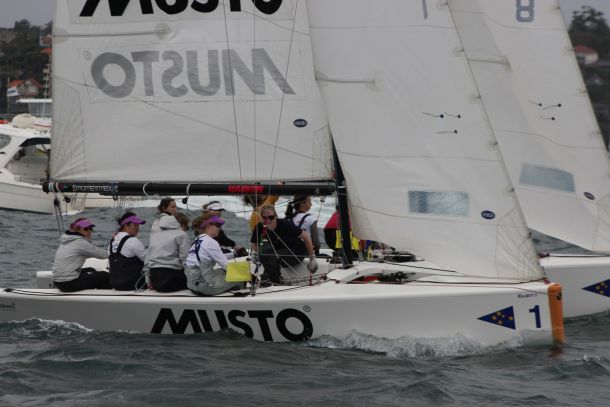 In her first women’s match racing event as a skipper, Parker held her nerve, even in the matches where there was barely a second between winning and losing.

“We gave them a good run for their money,” an obviously thrilled Parker said. “We had a few very close finishes; Tara (McCall, CYCA) and I finished bow-on-bow in the first flight of the second round robin,” said Parker, whose crew is the only non-CYCA one of the seven teams entered in the two-day event.

Parker and crew dealt well with the conditions on the match racing course near Garden Island. According to PRO, Steve Merrington, “It was quite shifty, 140 degrees to 120 degrees and fluky – 9-12 knots, occasionally more. All the girls did well considering the conditions,” he said.

“We came in to try and win as many flights as we could and to not make the same mistake twice,” Parker said. “We did make errors, but the shifts helped us regain the lead a few times – we picked them right.”

Second best team today was that of Lauren Gallaway, Rayshele Martin, Kathleen Stroinovsky, Angelique Kear and Antoinette Radford, who won six of their eight matches. At 16, it is believed Gallaway is the youngest contesting the event and one of her crew is also just 16.

“Two matches we won were really close. There’s room for improvement, but we definitely did better than we thought we’d do. “It was quite stressful in the pre-starts and managing the shifts,” Gallaway commented.

“We lost to Sarah (Parker) and to Kirsten (Norris), but everyone is sailing well,” ended Gallaway.

Merrington said they managed to complete Round Robin 1 comprising six flights, and then made inroads on Round Robin 2, though not all teams have sailed the same amount of matches.

The ISAF Grade 4 Marinassess Women’s Match Racing Regatta will be decided on Sunday when all matches are complete and the top two go through to the final.

The Marinassess Women’s Match Racing Regatta was inaugurated in 1996 and conducted annually. Milly Bennett and her crew of Seldon Coventry, Alice Tarnawski, Kajsa Doyle and Jess Russell from the RPAYC were crowned the winners last year after defeating a CYCA team skippered by Emma May and crewed by Nicky Bradley, Tara Blanc Ramos and Caitlin Tames.

For full round robin results log on to: /youth/marinassess-womens-match-racing-regatta/