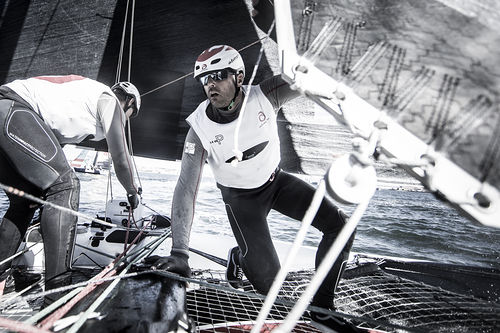 The hunters became the hunted as Team Oman Air closed the gap on Extreme Sailing Series frontrunners, Alinghi, on the second day of racing in San Diego.

Having seen some strong results on the opening day of the Act, Oman Air were ready for takeoff on day two. Phil Robertson and his crew stalked the first place Swiss boat around the course, pushing hard to take a bite out of Alinghi's lead.

Following six podiums out of seven races – including a hat-trick of pole position finishes – the Omani crew clawed back all-important points, finishing the day just five points behind the Swiss.

“We sailed so much better today than yesterday,” said Oman Air skipper, Phil Robertson. “We strung some firsts together and took down Alinghi. It's tight at the top and you can't give these guys an inch, so we're going to stay focussed tomorrow and keep fighting hard.”

Usually the kings of consistency with a clean sheet of first place finishes, the crew onboard the Swiss boat appeared to drop the ball in today's races, falling off the podium in two of the day's seven races and failing to top it in all but one.

Last year's San Diego Act and overall Series winners, SAP Extreme Sailing Team, were also kept at bay by the Omani crew. With tricky breeze plaguing the course, the Danes were unable to find their groove for much of the afternoon. Thankfully their mojo reappeared and they finished first in the day's final three races.

“We felt terrible for the first few races,” admitted helm Adam Minoprio. “We were a bit upset as we didn't feel like we had managed to turn it around from yesterday. Then suddenly the mood onboard changed and we were back on track. Things haven't been going the right way for Alinghi; I'd say they've run out of luck!”

The opposite was true for Red Bull Sailing Team. It looked hopeful for the crew when they scored a trio of consecutive podiums in the day's opening three races, but a series of mistakes saw them slip down the leaderboard as the racing drew to a close.

The Austrian-flagged boat was unable to knock the Danes off the podium; they currently sit in fourth ahead of British Ineos Rebels.

“Despite our good start to the day, we lost it a bit towards the end,” explained double Olympic gold medallist, Roman Hagara, the team's skipper and helm. “Overall it was a good day, but we could have done better.”

The team's new foil trimmer, Red Bull Foiling Generation star Micah Wilkinson, agreed that they would have liked to have done better, but affirmed that the team is still putting in 110 percent.

“The boys on board are giving it heaps,” he said. “It's taking a few days for me to adjust to the new boat as the weights are much heavier than the Flying Phantom that I've been sailing recently. I'm slowly learning though. I may get shouted out when I get things wrong but it's all part of the fun!”

An impressive Race Village spans Harbor Island, with food trucks, bars, and an education zone provided by US Sailing and other activities for all ages.

On the water, O'pen BICS youth sailing bolsters the schedule, in addition to the Element Sports Kiteboarding Invitational. To celebrate Military Appreciation Day, there will also be a full 20-piece Naval band and a display by San Diego Bay Adventures.