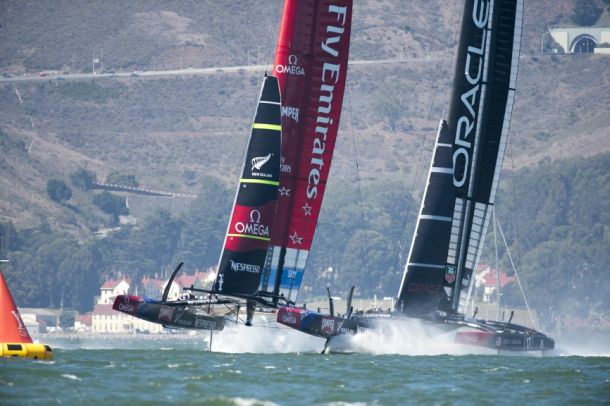 Emirates Team New Zealand announced today that the Halsey Street, Auckland, base will be fully operational from Monday, March 2.

Work will start immediately on modifying an AC45 catamaran to foil. With the first America’s Cup World Series regatta scheduled to take place at Cagliari, Italy in June, pressure is on the team to start the modifications.

The team also announced it had completed the restructuring process that came out of the team-wide review after San Francisco and 50 people have signed on and will be working full time from Monday.

Wing trimmer in 2013 Glenn Ashby has been appointed Sailing Director and he and Peter Burling will take on helming duties. Ashby is a multiple world and Australian champion in three multihull classes and Burling is current world Moth and, with Blair Tuke, 49er champion.

Dean Barker was involved in the review and restructuring process and Emirates Team New Zealand wants to retain his services as Performance Manager and Sailing Coach with a place on the executive committee. In the review of Emirates Team New Zealand, the team clearly identified the need for such a role. It is a crucial position for the team and we have been discussing this as a possible option for Dean since last November.

Until the review process was completed it would have been unfair to all involved, and therefore inappropriate, for Emirates Team New Zealand to comment on the various reports in the media over the last week. The review process is now complete.

It should be noted that the announcement of Bermuda as the venue for the next America’s Cup series had a serious impact on the team’s finances and sponsorship funding, reducing the budget by some $20 million. This meant the team has had to reduce its remuneration budget and each team member has, as a result, taken a significant pay cut.

Additionally several million dollars has been axed from the operations budget leading to the scrapping of one of the foiling AC45s that we had planned and, consequently, the elimination of one of the planned helmsman positions.

CEO Grant Dalton said: “As mentioned, the team has just activated its next stage of preparations and on Monday 50 staff begin the role of planning and construction for the upcoming race series.

“We’re hoping to retain Dean’s 20 years of America’s Cup experience in Emirates Team New Zealand but we also acknowledge it is time for new blood to be given the chance at the helm of the country’s challenger,” Dalton said.