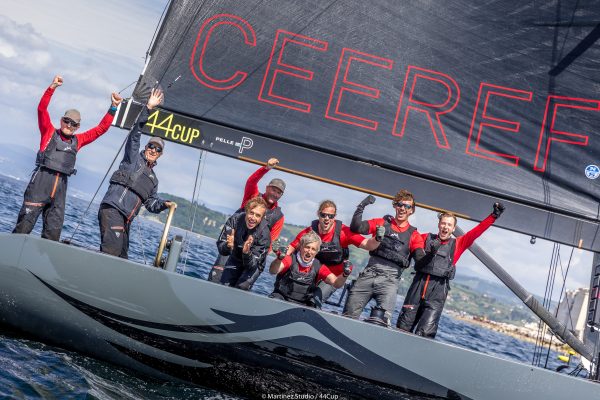 On the last day of the 44Cup Portoroz, again 20+ knots with gusts and shifts made for close, high adrenalin racing and plenty of opportunities throughout at the 44Cup Portoroz, but it was Team Ceeref that made the best of what was dished up to take the title.

After a difficult second day Igor Lah’s local Slovenian team, Team CEEREF, was most consistent yesterday and today built on this, posting initially a second. This was followed in race two by a come-from-behind win as Torbjorn Tornqvist’s Artemis Racing, for the first time at this event, led round the top mark. Team CEEREF chose to gybe early, enabling her to cruise into the lead upon which she then consolidated.

Going from fifth place to third on the final run of the final race was enough for the Slovenian team to win the 44Cup Portoroz by five points from Vladimir Proshikin’s Team Nika.

Meanwhile a battle royal was taking place for the final rung of the podium. After managing a perfect scoreline of three bullets on Friday, followed by one more race win yesterday, Team Aqua had a miserable start to the final day which dropped her from first place to fourth.

Fortunately, Chris Bake’a team fought back in the final race to come home second, enough to displace Atom Tavatuy. The Russian team’s fourth place nonetheless was their best result since joining the class in 2019.

The 44Cup Portoroz saw a return to racing in the high performance owner driver one design class for the first time in 17 months. It was a tribute to the local and national governments as well as the perseverance of the RC44 owners and the class that this event was able to take place.

The 44Cup will resume in Marstrand, Sweden from 1-4 July.

Full results and all information: http://www.44cup.org/news