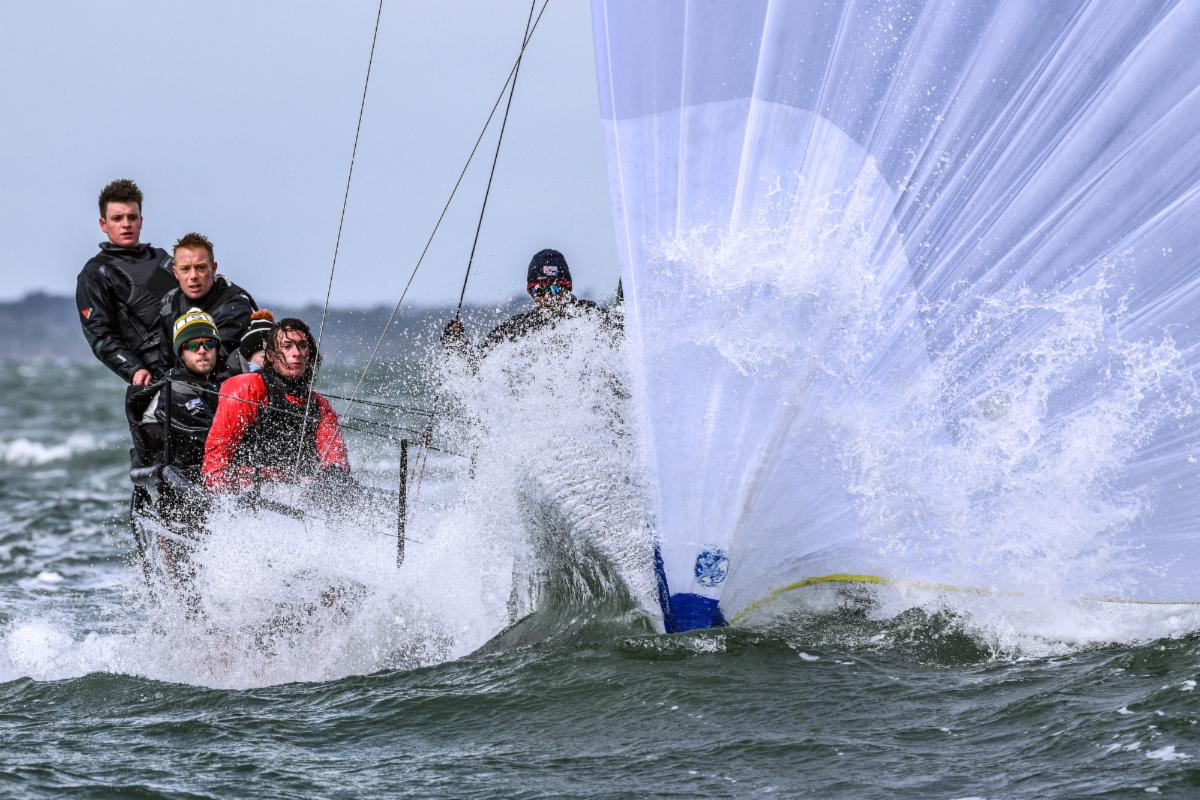 The Royal Ocean Racing Club’s Vice Admiral’s Cup came to a conclusion on Sunday local time after two days of racing in fresh to feisty conditions in the Solent, and the final day produced more challenging conditions for the high-performance classes racing under IRC and One-design Class Rules.

A gentle south-westerly wind with clear skies was soon replaced by a significant rainsquall with over 20 knots of breeze, gusting over 25 on occasions.

“Winning the first round of the FAST40+ circuit was our aim towards our goal of winning the season,” confirmed Rán’s Tim Powell.

“We have a number of youth sailors, both female and male and it was especially pleasing today to have well-executed crew work in difficult conditions. The FAST40+ Class is very much about boats that are built to withstand heavy weather, but perfecting those manoeuvres is so important towards the performance.

“Sailplane is very much a team effort, and we are delighted with our first win of the season against good opposition in the Performance 40 Class. I have to single out Nick Jones who has done an outstanding job in putting the programme together,” commented Sailplane’s Rob Bottomley.

“Our next race will be the Myth of Malham, and we have created a boat which is a good all-rounder for inshore and offshore racing. The two disciplines do help each other, and we hope to put in a good start to the offshore race, buoyed by the confidence from this win in the Vice Admiral’s Cup.”

Sam Laidlaw was quick to mention that the biggest factor in BLT’s win was teamwork: “We have been racing together for about ten years,” Laidlaw said “When you race these quirky boats in big breeze it requires a lot of know-how and understanding and when you get it right it is very thrilling!

“The Quarter Ton Class has a lot of well sailed boats that excel in different types of conditions, so you really have to be at the top of your game. Many thanks to the RORC Race Team for providing great racing, especially on the first day. The fast race sequence allowed us to get four races in, which should be applauded.”

HP30 Class
Glyn Locke’s Farr 280 Toucan was the winner of the HP30 Class, retaining the title won in 2019. Toucan was pushed to the maximum by Jerry Hill and Richard Faulkner’s Farr 280, Moral Compass, which finished the regatta just a point behind. Jonathan Powell’s Farr 280, Peggy, scored a third place in the final race to claim third, just a point ahead of Jamie Rankin’s Farr 280 Pandemonium

Glyn Locke races Toucan with his two sons; Alex, who drives, and Anthony who trims upwind and downwind. The Locke family hails from Yarmouth IOW, giving a home victory to the team: “It was pretty full-on, fast and furious and we had a few scary moments, and it was very, very wet!” commented Alex. “It’s an absolute blast,” smiled Glyn Locke. “The chit-chat and banter from the whole crew is so much fun.”

J/111 Class
In the J/111 Class, Tony Mack’s McFly held off a strong challenge to win the J/111 Class. Chris Jones and Louise Makin’s Journeymaker II won the last race to finish the regatta in second place ahead of Cornel Riklin’s Jitterbug.

Cape31 Class
Russell Peters’ Squirt has stamped their authority on the newly formed Cape 31 UK Class, winning five straight races to clinch the class win – the first round of the Cape 31 circuit. Lance Adams’ Katabatic was runner-up for the class and Simon Perry’s Jiraffe had a great final day at the Vice Admiral’s Cup, winning the last race to take third place for the class.

SB20 Class
Conditions were right on the edge for the SB20 Class with Stephen Procter’s Xcellent scoring their fourth win of the regatta to take the title by a handsome margin. Tom Neilson’s team was second, and an impressive final race for Lizzie Farrington’s Boomerang lifted the team to third, just one point ahead of Richard McAdam’s Breaking Bod.

Racing with the Royal Ocean Racing Club continues next weekend with the 230nm offshore Myth of Malham Race. The first major offshore race of the year mirrors the start of the Rolex Fastnet Race. Well over one hundred boats are expected, which will be an impressive sight, starting from the Royal Yacht Squadron Line on Saturday 29th May.