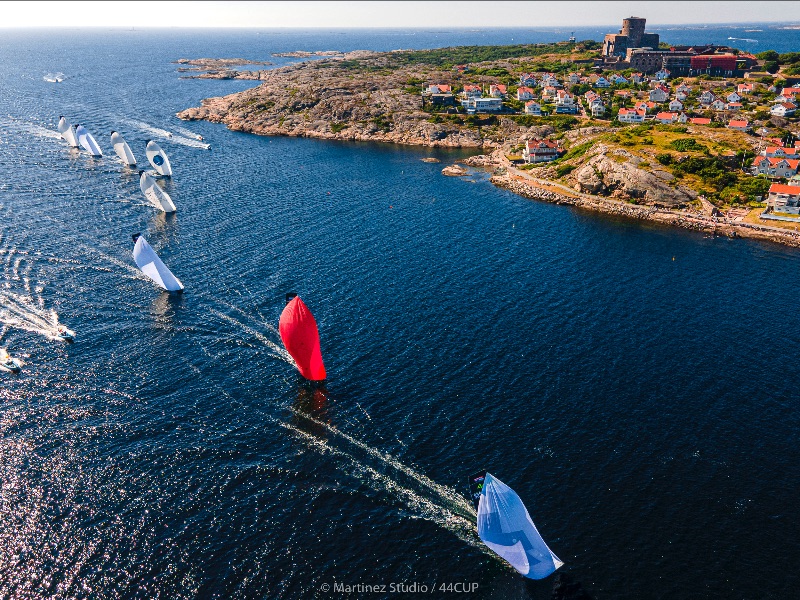 Just when the pecking order seemed to be firming up at the 44Cup Marstrand, today’s final race off the picture postcard Swedish island turned the results on their head, yet again.

Hugues Lepic’s Aleph Racing and Nico Poons’ Charisma were looking reasonably comfortable in the two top spots overall until the final race, in which they finished last and second last respectively. As a result, results have turned and there is a tie at the top and the top four boats are separated by two points and the top seven by just nine.

In May, at the first 44Cup event in Portorož, Chris Bake had one day when his Team Aqua put no foot wrong, scoring three bullets from three races. Today, Bake’s performance came close again, with a 2-1-1 day.

While Aleph Racing had been slowly growing her lead through solid, consistent sailing, disaster struck at the start of today’s final race when she was shoved over the line. Having to re-start dropped her to last place, and despite some promising moments when it appeared she might recover, ultimately, she was unable to.

This last race today concluded in dramatic style with the finish line set at the entrance to Marstrand Harbour for the benefit of spectators and sailing fans.

While Team Aqua crossed comfortably first, the French team was left to bring up the rear. Because of this, Aleph Racing is now tied on points with Team Aqua, Bake’s team ahead on countback. Considering they started the day sixth overall, this is perhaps one of the most meteoric rises we have seen in 44Cup racing.

“Yesterday was really hard and today was difficult,” said Bake. “We are all really close and some decent shifts and lots of variability in wind speed gave us some advantages we were able to take hold of. Our positioning was good, as was our communications. I really enjoyed the sailing. It was a great day – flat water, 8-12 knots – Sweden at its best.

“In today’s first race, Team Aqua had come home second, despite racing with no electronics. “We went back to old school, sailing with our heads out of the boat which honestly may have helped a little bit, making you think about the environment a bit more and your relatives rather just looking at numbers all of the time.”

Team Aqua’s tactician, Cameron Appleton added: “It was a big turnaround. We weren’t doing a lot wrong yesterday. It felt like we never woke up. As Coach said, we were the nail yesterday and today we were the hammer.

“We didn’t change a lot, just went out and tried to execute on all of the things we thought we had done poorly, all the subtleties of the sport that don’t always look like they amount to much. We just reset and tried hard to sail our own race. The guys sailed hard and no one on the team gave up.”

Bake, the ‘Master of Marstrand’ having won here the most, narrowly lost the first race to Vladimir Prosikhin’s Team Nika, the two boats showing a welcome return to form after both endured terrible results yesterday.

Posting a 1-2 in the first two races, Team Nika looked set to enjoy a similarly good day to Team Aqua, until she picked up a penalty as she was trying to nose into the lead going into at the top mark in the final race.

“I would have been happier if we had won the last one,” remarked Prosikhin, who was uphappy with the outcome of this incident. “But I am happy that we sailed really well.”

It was also an up and down day for Pavel Kuznetsov’s Atom Tavatuy. Like Aleph Racing, the Russian team had maintained supreme consistency through this regatta – until today when they suffered two uncharacteristic last place finishes.

Kuznetsov almost managed to flip this on its head in the final race when the crew kept the lead going around the top mark, but subsequently got outpaced by an invincible-looking Team Aqua. They did cling on to second.

Atom Tavatuy’s tactician, Evgeny Neugodnikov, said they had been overtaken perhaps by a call for the wrong spinnaker, but Team Aqua had also gybed first and had chosen the better gate mark.

The towering Russian continued: “We were strong in the second race also, but there was a mistake at the bottom mark where we got a penalty with Charisma. Charisma came third and we came last. But we are happy we can go fast upwind and downwind and fight with CEEREF and Aqua and the other teams. Our mood is good. We are still in the game.”

“Somehow we have never been able to win Marstrand, so this is the spell we have to break,” said Lah. “But one more day and three more races. We are two points behind the leader, so anything can happen.”

Tomorrow the three deciding races are scheduled to start at 1130 CEST.