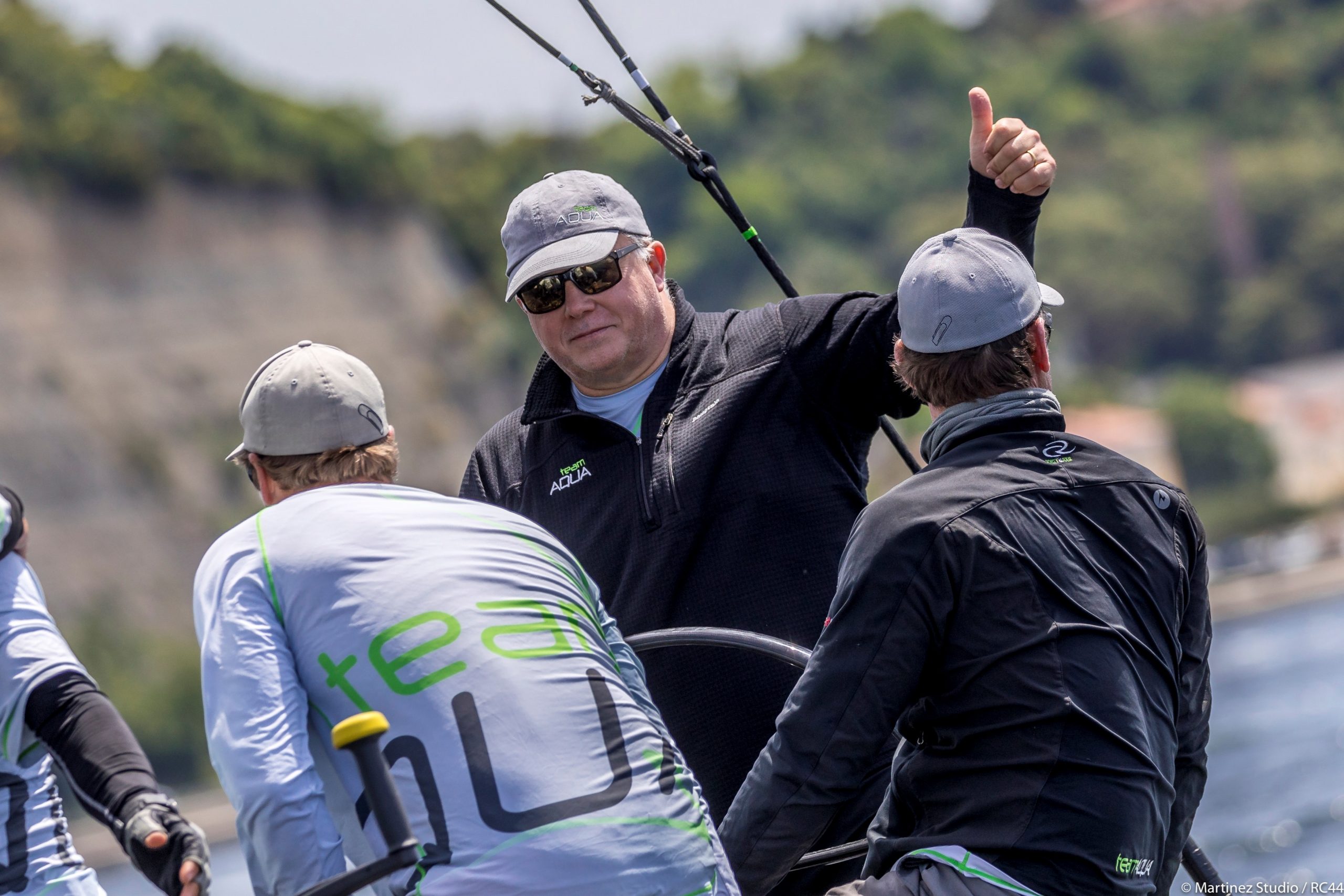 Team Aqua's crew were pleased with their day - 44Cup pic

In a fleet as close as the 44Cup’s it is rare for one team to dominate, but perhaps because of the 17-month absence caused by the pandemic, yesterday at the 44Cup Portorož, Slovenia, there was one stand-out performer, Team Nika.

However, today it was the turn of RC44 legend Chris Bake, Kiwi tactician Cameron Appleton and Team Aqua to shine brilliantly.

Team Aqua’s crew seemed unable to put a foot wrong and won all three races. Like Team Nika on day one, Team Aqua ended the day with a four-point lead. She is ahead of Hugues Lepic’s Team Aleph, still second with the most consistent scoreline across the fleet, but with three teams within three points of them.

If yesterday provided the perfect light reintroduction to 44Cup racing after the lengthy break, today was a step up in wind strength with a warmer southerly in the mid to high teens. This direction allowed the race committee to set up off the much-photographed seaside town of Piran, Portorož’s ancient neighbour.

It didn’t seem to matter where Team Aqua started today, she always made the best of the first beat and had pulled into the lead by the all-important first top mark rounding. From there in the first race, she lost the lead to Charisma up the second beat, but recovered, pulling ahead on the final run.

Team Aqua was strongly challenged by Team Aleph in race two, and Team CEEREF in the third, but each time the crew sailed sensibly, edging ahead and then defending well.

Even at the finish of today’s final race when the fleet compressed, causing a last-minute dive for the finish line, when the results could have gone any of five ways, Team Aqua kept its collective head to come out on top.

“The conditions were superb; the boat was set up well; we were fast upwind; stayed out of trouble; got decent starts and managed to hold on to it – it was pretty good overall, a great day,” explained a jubilant Bake back on the dock in Marina Portorož.

“It was tight in a few places, but Cameron and the team were on fire, I was pretty locked in and it all worked. Sometimes it does.”

In a fleet as close as the RC44 for one team to dominate so completely is rare, and the last time may have been when Team Aqua managed this in Malta in November 2016.

“It is great to be able to still do it, especially with the teams where they are and it is all so close,” continued Bake. Perhaps this is a sign of a return to Team Aqua of old, when it was the unbeatable force among the RC44s.

“However, more probable is it being due to Bake coming to Portorož a few days early to train after the long break. “It always helps to spend some time on the wheel to make it happen.”

With the southerly and south-westerly wind blowing off the Croatian coast, it was gustier and shiftier than yesterday.

Team Aqua’s long term tactician, Cameron Appleton, earned his keep today but paid tribute to the team: “Today was phenomenal – the guys did a brilliant job all round. We were sailing crisply and smoothly and had the boat set up well.

“We could just look out of the boat. We had one philosophy all day and we could go and execute that plan, although it was difficult on the runs because they were not very straightforward.

“It was a pleasing day and we are happy to have picked up all of the races like that. Considering Chris has been off for so long, the victory goes to him and his patience, his execution and steering the boat really well.”

Behind the best scorers today were Team Aleph and Pavel Kuznetsov’s Atom Tavatuy, both of which added 10 points to their scorelines. The Russian team posted a 5-2-3, their deepest result coming after approaching the top mark in third they picked up a penalty, dropping them briefly to last.

Otherwise, towering tactician Evgeny Neugodnikov felt Atom Tavatuy has good speed both upwind and down, but the opportunities were often more on the latter: “There were puffs coming from behind and some boats were sailing lower, but at the same speed and you needed to find a good moment to gybe.

“There could be a lot of changes during one race. Today was a difficult day for tacticians but also for the teams because sometimes you needed fast reactions. Fortunately, our reactions were good.”

Much improved today was Charisma, the team of Monaco-based Dutchman Nico Poons which scored a 2-4-5 helping to get them back in the game after a difficult first day, when they suffered some technical issues. With these resolved “it was much better than yesterday”, agreed Poons.

Tomorrow the forecast is for the wind to be southerly once again, but a little stronger still. Will Team Aqua continue her winning streak or will a third team come to the fore? Chris Bake: “If it is more of the same tomorrow – please bring it on! I don’t know if we can keep doing what we did today, but we can certainly try!”