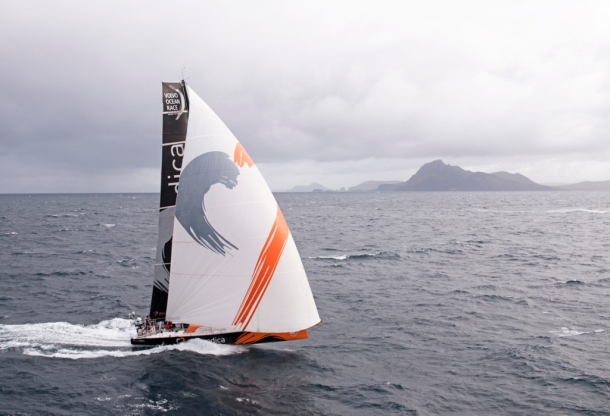 Four boats in the Volvo Ocean Race celebrated rounding the venerated landmark of Cape Horn on Monday, a pleasure cruelly denied Dongfeng Race Team (Charles Caudrelier/FRA) after the Chinese boat’s mast was broken early in a dramatic day on Leg 5.

MAPFRE (Iker Martínez/ESP) and Team Brunel (Bouwe Bekking/NED) were hot on their heels as the fleet prepared to head north at last and back in to the Atlantic for the first time since November.

They still have quite a challenge in store, navigating up the Brazilian coast towards the final Leg 5 destination of Itajaí, which they will reach after 6,770 nautical miles (nm) of the most testing sailing in the nine-month offshore marathon around April 5-6.

For Team Alvimedica’s 30-year-old skipper Enright, it was the culmination of an eight-year dream, which first took shape on the film set of Disney movie, Morning Light, when he hatched the idea of entering a team in sailing’s leading challenge.

There are no points on offer for leading the Volvo Ocean Race fleet around Cape Horn, but so much kudos.

“For me, most of this race is about competition, but this leg is a little bit different. This is pretty special for us,” said Enright of Bristol, Rhode Island, by far the youngest skipper in the fleet.

But this was no time for lengthy celebrations.

“We can see Abu Dhabi Ocean Racing behind. The match racing continues. Keep the focus!”

Walker, who has so far carried out his pre-race battle plan of earning podium places on every leg, was equally buoyant.

“I’m just happy to get here safely. That’s the main thing. There is still a long way to go, but it’s a big relief. And it’s an even bigger relief because we’re in good shape,” he said.

For Dongfeng Race Team, who had started Leg 5 locked on eight points (lowest overall wins) it was a case of ‘what might have been’ as well as ‘what next?’.

At 0315 UTC, the crew were startled by a sickening crack that sent all of them scrambling to deck to check out the damage. The boat’s mast had broken above the third spreader, which robbed it of much of its manoeuvrability.

The plan is now to nurse Dongfeng to Ushuaia, Argentina, under sail.

Reached via Inmarsat, a bitterly disappointed Caudrelier said: “I’m gutted. As you’ve seen from the position reports we have been, on purpose, backing off a bit, not attacking in any way.

“The mast broke without warning in about 30 knots of wind. We are unable to sail safely on starboard tack, but we are able to make reasonable speed on port tack. We will head towards Ushuaia and assess our options for getting to Itajaí.”

He could retire from the leg, but if a patched-up boat can be returned to the Leg 5 track and complete the stage to Itajaí, Caudrelier will earn an extra two points – six for sixth and last place instead of eight for not finishing at all.

That could make all the difference come the end of the 38,739nm race in Gothenburg, Sweden, on June 27, especially with Dongfeng Race Team currently so close to the lead.

Meanwhile, Team SCA (Sam Davies/GBR) were continuing to battle their way through heinous conditions in the Southern Ocean, some 550nm behind the pack still racing.

They have been considerably hampered by damage to their fractional code zero sail after a Chinese gybe last week sent the boat crashing on its side.

Davies’s crew are expected to round Cape Horn in the early hours (GMT) on Wednesday.

“We can’t take any more risk with the sails that are left because we need them on the way from Cape Horn to Itajaí,” she said.

Caudrelier will understand her caution. Completely.