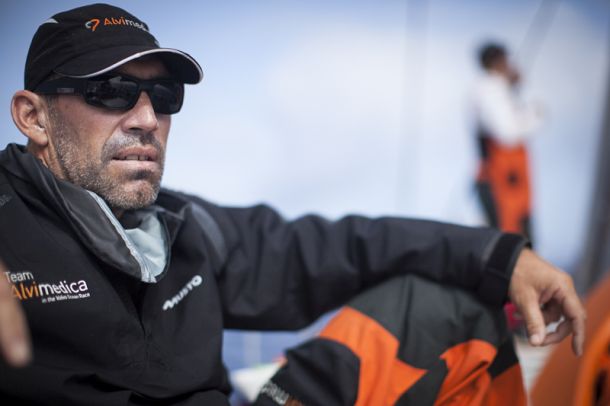 Auckland, New Zealand, March 9, 2015 – Team Alvimedica will add some Southern Ocean experience to the crew for Leg 5 with the addition of Volvo Ocean Race veteran Stu Bannatyne. The New Zealander will start preparing with the crew tomorrow ahead of the Leg 5 start from Auckland on March 15.

“Stu brings incredible experience to us for the tough Southern Ocean leg ahead,” said Team Alvimedica skipper Charlie Enright. “The leg that we are about to embark on is like nothing we have seen in this race so far. With most of our crew never having sailed in the Southern Ocean and around Cape Horn, we will benefit from Stu’s knowledge and driving skills on this challenging leg,” Enright said.

“Stu sailed a trans-Atlantic training leg with us last summer and provided some invaluable insights and has continued to be a sounding board for us since the race started,” Enright said. “The toughest decision has not been whether to bring Stu aboard but rather how do we make do without one of our core crew for this next leg.”

French race crew Seb Marsset will work from shore with the navigational support team and is scheduled to re-join the race crew for Leg 6 from Brazil to Newport, RI. “The rest of our crew will have to step it up on Leg 5 to cover for Seb who has proven to be a key team member. Seb and I have talked about this possibility of a crew swap on Leg 5 since before the race started when we brought Stu to our safety course last summer,” Enright said.

Bannatyne is looking forward to stepping on for Leg 5. With six Volvo Ocean Races including three wins to his credit, the New Zealander is no stranger to the extreme conditions of the Southern Ocean. “The next leg with its huge waves and sustained winds of sometimes over 40 knots is the most demanding of the race. Knowing when to throttle back may be as important as pushing the limits. I hope I can help Charlie and the guys in their first Southern Ocean passage.”

Team Alvimedica is the youngest entry in the Volvo Ocean Race 2014-2015, the world's toughest and longest sporting event. The crew is led by American skipper Charlie Enright, age 30. Alvimedica, the European based medical devices company, is the team’s owner. Founded in 2007, Alvimedica is a fast growing challenger in the global field of interventional cardiology, committed to developing minimally-invasive technologies. This is the team’s first entry in the extremely challenging 39,000-mile race that started October 11, 2014 from Alicante, Spain and features stopovers in 11 ports around the world.