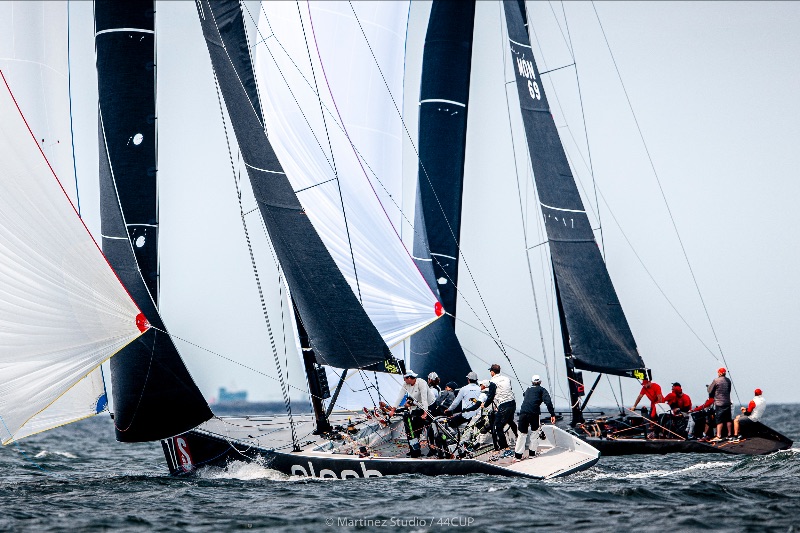 Getting everything right is a must - 44Cup Marstrand

In an example of the high performance RC44 one design class’ typically ultra-close racing, yesterday’s winners dropped to the bottom of the pile at the 44Cup Marstrand today, as those that were consistent rose to the top.

For competitors and race management alike, it was a difficult day with an overcast sky. A 15 knots north-easterly offshore wind dropped to below 10 knots as the afternoon wore on. This was combined with a tricky current, mostly sweeping right to left across the course, often favouring the right side.

A different day to yesterday when the bigger conditions and any favourable current seemed more random.

On board Dutchman Nico Poons’ Charisma, winner of the 44Cup Marstrand in 2018, tactician Hamish Pepper called the right side correctly, once the first race got away successfully under a U flag.

Charisma started at the committee boat end and tacked. Gaining maximum benefit to the right, Poons’ team rounded the first mark and from there never looked back.

Poons was happy with this outcome, but was prouder of how his team had subsequently fought back in today’s third race to finish in third place overall. At one point they had been last, after being forced to make a penalty turn at the start of the first run.

“We thought we had given enough room, but it was a big palaver – it could have been a Greek saga! It happens. There’s two days to go. The ball can roll anywhere.”

Race 2 was also won out of the start. However, on this occasion from the pin, with Igor Lah, the overall 44Cup leader on Team CEEREF taking this option on his own.

Tactician Adrian Stead explained: “There was a little pin bias. We were happy to make it look like we were coming down with the pack, but we decided we wanted to take all of it which we did in the end.”

This strong start allowed the Slovenian team to nose into the lead as the eight boats seemed to play the shifts in unison going up the first beat. The run was tricky, but Team CEEREF kept out of trouble to take the bullet.

“It wasn’t clear which side you had to defend,” continued Stead “On the second beat Charisma did a good play through from the right. In the first race we should have consolidated where we were, but we are pleased with how we’re going.”

In the third and final race of the day, Hugues Lepic’s Aleph Racing performed a similar start at the pin with Team CEEREF on their hip. While there was greater separation across the race track in this, the French team led around the top mark.

Italian tactician, Michele Ivaldi, a two-time winner in Marstrand, explained: “We took the pin and then it was a game of patience. We went all the way to the layline and were a tiny bit lucky to enter the offset overlapped with all the boats to leeward. We just managed to clear one length in front of everyone.

“On average, the left had a bit more pressure in a left direction but a couple of times the right paid big time. It was an open course. We saw gains on both sides.”

Despite some significant shifts they hung on to first place all the way to the finish.

”The boys did a very good job. We were most of the day going to the correct side of the course. It was one of those days where all the pieces came together,” Ivaldi said.

Both Aleph Racing and Charisma scored a 1, 2 and 3 today, but Aleph Racing enjoyed a better opening day and now leads the 44Cup Marstrand by three points. This is the first time the French team has been out in front since Rovinj in 2019.

However, owner Hugues Lepic acknowledged that in a fleet as close as that on the 44Cup, and with six races still to sail, this means little: “In the RC44s what happens at the end of day two is completely irrelevant. It is what happens by the end of day four that matters. But it is a good feeling, especially here because it is a very diverse place in terms of weather.”

More generally of his team Lepic added: “We have been with this crew for three years and that makes a huge difference. Everyone knows each other and it has been quite stable.

“Michele and I know each other well. We have also found some good modes with the boat that we didn’t have in the previous years. We seem to do well when the water is flat and there is enough wind for the boat to have speed.”

Both Torbjörn Törnqvist’s Artemis Racing and Pavel Kuznetsov’s Atom Tavatuy are sailing strong regattas, currently holding fourth and fifth respectively, with the Russian team once again having scored no finish deeper than a fifth.

To date, in four races, there have been four different winners. It would be no surprise to anyone if the remaining four teams also won races over the next two days.