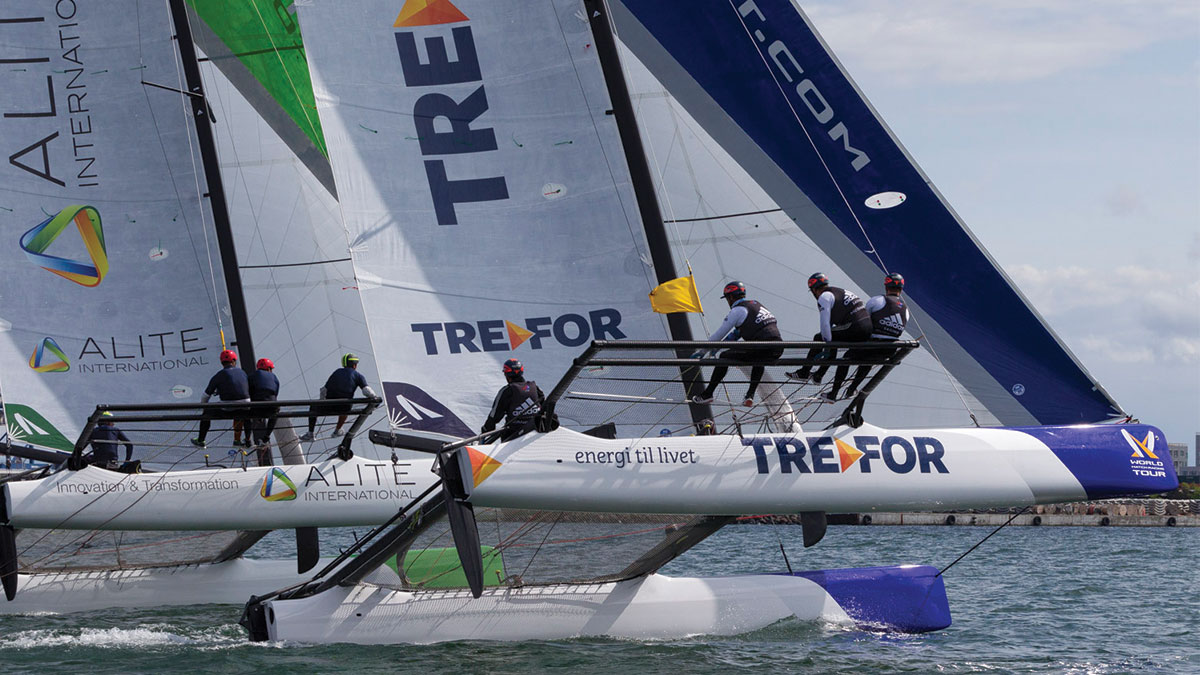 Taylor Canfield (ISV), US One, has won World Match Racing Tour Copenhagen after beating Iker Martinez (ESP), Team Espana, in the most extraordinary circumstances. After taking straightforward wins in the first two matches of the final, in the third match Canfield found himself in a much tougher battle with the 2008 49er Olympic Champion who was improving by the race.

The early lead went to Canfield who always looked stronger at the start, but Martinez found a way past at the top of the beat. With the gusty wind pulsing hard, both boats nosedived badly on the downwind leg, and they regrouped in time to discover they were rapidly converging – collision course – on the same leeward gate mark. Martinez never gave Canfield mark room, forcing US One to ride over the top of the buoy and hooking it up underneath the trampoline.

Martinez, charging his way up the course, was given a penalty by the umpires and the match effectively restarted from scratch. However it wasn’t long before the Spaniard had sailed clear of Canfield again and looked set to win the match and take the score to 1-2. Just a 100 metre dash to the finish line to keep Spanish hopes and dreams alive, but no! The Team Espana crew unfurled the gennaker in the mistaken belief that they had another lap to complete. Canfield, some way behind, steered US One across the line unchallenged and undefeated, 3-0 in the Final. Victory in Copenhagen, and $33,000 richer.

“Oh my god, a bit of a relief seeing Iker deploy the gennaker,” said Canfield immediately after the race, scarcely able to believe his luck and feeling a bit sorry for his rival. “Tough to keep track of all the laps. We didn’t sail the race we’d have liked to, but we’ll take the win for sure. Spirits on US One were high, very intense, we were still pushing hard to get back into the race, but he made the last mistake, and we’re OK with that.”

Martinez can’t have been happy with his lap-counting error but by the time Team Espana returned to shore they were all smiles. Asked exactly what happened in that last race he joked: “I don't remember anything! But I was telling my team, ‘Look, if we focus and we win, we will never come back – ever – because then they might beat us the next time! So I think [today’s outcome], that’s the best that could happen to us. We are more than proud to be here, in second place.” And so they should, having never raced an M32 together before and Martinez with no prior match racing experience. Canfield exposed Martinez’s match racing naivety a number of times, but the double Olympic medallist and Volvo Ocean Race skipper showed an incredible ability to learn and was never expected to progress so far through the competition on his Tour début.

Earlier in the day Martinez had seen off the last remaining Scandinavian in the competition, Nicklas Dackhammar (SWE), Dackhammar Racing, in a tense Semi Final. On the other side of the draw Canfield came out on top of Yann Guichard (FRA), Spindrift racing. In the one-race Petite Finale the Swedes beat the French to take the bottom step of the podium. After only just scraping through the early rounds of the fleet race qualifying, third place was an impressive result for Dackhammar who looked stronger and stronger throughout the six days. “We're super happy, 3rd is a great result for us,” said the young Swede who has the taste for even greater success in the next two months. “We'll take one place more in Newport and one place more in Marstrand. I think we have a lot of things to work on, but we have sailed really well here and we just need to work on a few things.”

This week has produced some stunning racing, with many high points, not least Sally Barkow (USA), Team Magenta 32, coming so close to eliminating US One in their nailbiting Quarter Final match. But Canfield rode his luck to come through all the way to victory. After finishing 7th in Fremantle two months ago, the US Virgin Islander’s campaign is well and truly back on track. US One take home a winner’s cheque for $33,000 from a total prize purse of $200,000. But there’s scant time for celebration as World Match Racing Tour Newport is just a couple of weeks away, and that’s one that US One will surely want to win on home waters. However, there will be 19 other international teams doing their very best to make sure that doesn’t happen. The focus of $1m prize money for the winner of the final in Marstrand this July is really beginning to focus the sailors’ minds, and ramp up the intensity as the Tour approaches its climax.