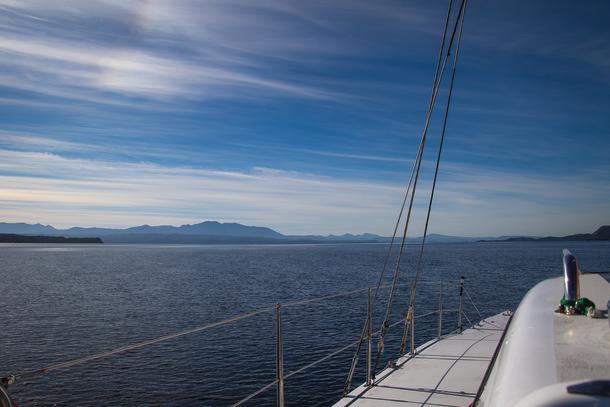 Sailing the wild side of Tasmania, its west coast, has been a long held goal: remote, rugged, less frequented, all aspects we value. But to cruise there safely, with a chance to see and explore pristine wilderness in all its moods, you need time. You cannot be on a schedule. So although we have often sailed to Tasmania, we had never been able to venture right along the West Coast, not till we had retired and lived aboard.

So let us take you through some of the passage planning and practical aspects of a trip down the wild side, before showing you around its two iconic destinations: Macquarie Harbour and Port Davey-Bathurst Harbour.

Whether you talk to locals or check the wind roses, it seems the best time to go along the west coast of Tasmania is from February to April. The weather is a little more settled, the winds and seas calmer.

As it turns out, we did get the northeast conditions to get down the coast but very strong and persistent westerlies in excess of 35kn in Macquarie Harbour and even more in Port Davey-Bathurst Harbour. In fact we had unseasonably strong winds and rainy weather.

So one important part of passage planning is to allow plenty of time, not only to sail there and explore but also the chance you will be weather bound. You can be stuck for several weeks more than anticipated, waiting for an appropriate weather window to move on. You also need at least two weeks in each major location to do these stunning wilderness areas justice.

But first, you have to get there. For us, this means finding ways of avoiding overnight sails. We therefore look for safe ocean anchorages along the way to break the journey.

In the right conditions, you can anchor overnight along the daunting west coast. For instance in an easterly breeze you can find shelter at Ann Bay in the northwest corner of Tasmania; at Kenneth Bay near Sandy Cape on the way to Macquarie Harbour; on either side of Point Hibbs with Hibbs Pyramid at the northern end, behind Bird Island at the southern end; and at Elliott Bay just past Low Rocky Point.

We chose Sandy Cape on the passage to Macquarie Harbour and Hibbs Pyramid on the passage to Port Davey. All these are typical west coast anchorages, never totally free of swell but quite comfortable for us on our catamaran.

Taking your time when a little voice inside you might be whispering “get south as quickly as possible”, has special rewards. The coast is beautiful, rugged and spectacular, the wildlife active and it is amazing to be sailing at a good pace in this often inhospitable seascape.

A sense of achievement and exhilaration fills you. You cannot help but reflect on how lucky you are.

For all our Tasmanian wanders, we refer to two cruising guides to help us map out our passages and select anchorages, these are: ‘Cruising Tasmania’ by J. Brettingham-moore and ‘Tasmanian anchorage guide’ published by the Royal Yacht Club of Tasmania. They are our bibles.

Sailing to remote areas can mean limited VHF weather reports and sporadic internet service to download forecasts along the coast or in the two main harbours.

For instance, once out of Strahan there is no internet nor mobile phone service. In some anchorages in Macquarie Harbour you will be able to communicate with Tas Radio Hobart on the VHF or HF, but once up the Gordon River you have to rely on HF, a satellite weather system or at least carry an HF receiver as we do.

In Port Davey the only place with internet and phone coverage is at Melaleuca Inlet at the little aerodrome, but that is it. So you are reliant on HF, satellite weather or the goodness of people relaying forecasts.

When westerlies blow on the west coast, they come a long way across the Southern Ocean and thus pack some punch. We have found that, especially in Port Davey when strong winds pick up with fierce gusts and swirling willy willies, it is safer to anchor along the shore and tie yourself back to trees or bushes with stern lines, rather than anchor out with large lengths of chain.

Once tucked in you are secure and most winds will fly over your mast, not through the rigging. So we carry two 50 metre and two 40m ropes.

Tasmania and especially the west coast are not known for their balmy weather. So one needs to be equipped for all sorts of conditions, specifically for the cold and the wet, no matter the season. This goes for clothing and bedding!

Merino or thermal layering will keep you warm and dry quickly if your clothes get wet. An outer shell, gloves, beanies are essential.

If you decide to go ashore for bushwalks, boots, gaiters or waterproof pants can be life savers. Not just in case of rain and rivulets underfoot, but also in case of mud; oh and leeches.

A walking pole is also handy to help with steep climbs or descents in slippery terrain. One of our conclusions from this trip is that gumboots would actually have been more practical than walking boots in the soggy conditions we enjoyed; plus a lot easier to clean once back at the dinghy or boat.

Last but not least, do not venture down the west coast without a well-provisioned boat.

There is only one spot for reprovisioning along the way: the little IGA at Strahan. So food, drinks, sundries including the all-important loo paper, fuel, must all be gathered in sufficient quantity to last for several weeks.

We have a standard provisioning list that keeps two people autonomous for six weeks or four people for three weeks as was the case for us this time. It is based on a full menu for a week and got extended over time. It includes treats, since cruising is about pleasure, not pain.

We bake on board, make our own yoghurt and grow sprouts. We run a good size fridge and a 40 litre freezer, mainly used for storing meat.

We fish, not very successfully, plus forage for shells.

For fresh water, we collect rainwater to top up our tanks and run the washing machine. We have a water maker, but it did not get used on this voyage given we had ample rainwater supply. You can find fresh water in Macquarie Harbour and Port Davey-Bathurst Harbour but it is tannin stained.

When you think harbour, you may well have an image of a port with artificial structures and jetties. But picture this: an enclosed waterway six times the size of Sydney Harbour; empty it out of people and townships and, instead, fill it with rainforest wilderness right down to the water.

The surrounding untamed forest and the mighty Gordon River that flows through it make for an outstanding, otherworldly setting; wonderful for cruising, with numerous isolated anchorages. The only settlement is the village of Strahan with its fine old buildings dating back to the 1800s and the mining and timber boom. The rest is grandeur, isolation and the jewel in the crown of Tasmania’s Western wilderness. There is no one around, it is so big and breathtakingly beautiful.

Two charts prepared by Trevor Norton are well worth the investment of $20 each as it gives detailed information about approaches to anchorages and river details up the Gordon. You can obtain these in Strahan, where Trevor operates the commercial yacht Stormbreaker.

We stayed at the Back Channel upon arrival at Risby Cove in Strahan, where there is very limited jetty side mooring space available, at Betsy Bay and at Double Cove on the western shores, at Sarah Island, down Birchs Inlet at the southern end, at Kelly Basin on the eastern side. All had their charm and attractions.

We could not resist going twenty miles up the Gordon River, all the way to Sir John’s Falls. We stopped in a few places along the way, enjoyed breathtaking reflections, sunsets and sunrises as the mist enveloped us and the river.

But we have one word of warning: if strong wind is forecast, great protection is offered in the Gordon; however, if rain is also forecast, stay right away or be prepared for flooding and log hazards. When we were there, the river rose by two metres and we saw hundreds of large tree trunks careering down the river.

If you seek an untamed, pristine, remote environment this is the ultimate. With no settlement, no permanent population, no road for hundreds of kilometres, no access other than via sea or air, this is the truly, aptly-named south western wilderness.

The two large water expanses of Port Davey and Bathurst Harbour are linked by the seven mile narrow Bathurst Channel. There are numerous anchorages in the two harbours and in the channel, with a mix of large bays and more intimate coves.

We arrived at Bramble Cove in Port Davey, spider-webbed ourselves at Wombat Cove and Casilda Cove along the Bathurst Channel. In Bathurst Harbour we anchored at Clayton’s Corner and King Cove, sneaked up the Melaleuca Inlet and wandered all the way into Moulters Inlet.

We ended our stay at Spain Bay, back at Port Davey, before heading south around South West Cape, bound for Hobart.

In most anchorages there are opportunities to stretch your legs and climb the surrounding hills, which afford panoramic views of the waterways and mountain ranges. Although there are few made tracks, it is worth the effort. The environment here is impressive because high, rugged, jagged mountains surround you, making you and your boat insignificant in this vastness.

The weather in this region reigns supreme; actually it just rains supremely! But even in adverse conditions this place is spectacular and, having come all this way, you cannot help but explore, no matter the weather, and find the landscape overwhelming.

It is the big things, like climbing daunting Mt. Rugby or Mt. Misery, or the little things like the bright orange fungus in the middle of the muddy track, or even the surprise glimpses of a quoll, or the critically endangered orange-bellied parrot, or a platypus or two in their natural environment. It can only leave a lasting impression.

But be aware that more people dare to come and experience this wilderness for themselves. So, like us, you may be surprised by the number of yachts visiting these so called remote regions. We had been there before and had it nearly to ourselves: not this time.

We now look back at this part of our Tasmanian voyage with great pleasure. It lived up to and beyond our expectations, fulfilling our goal of sailing down the west coast, discovering new anchorages and pushing the envelope. We have come out feeling invigorated, challenged and, more than anything, happy to be sailing without a schedule.

You can do so much more when time is on your side even if the weather is not always cooperating. ≈