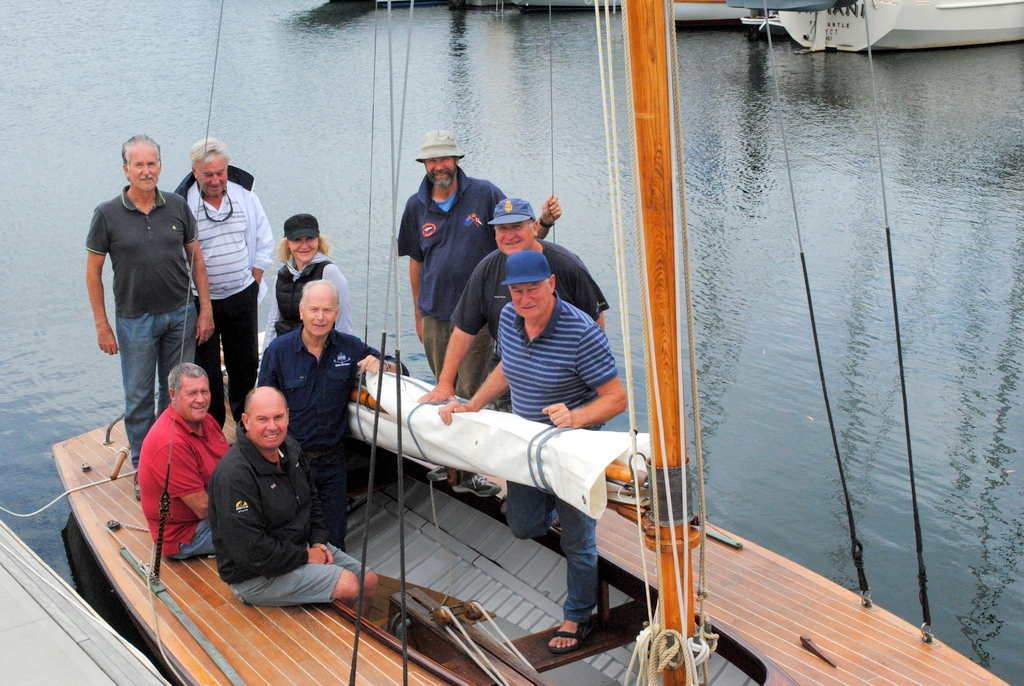 One of Tasmania’s most famous racing yachts, the 21-foot Restricted Class boat Tassie Too (affectionately referred to as ‘TT’), will once again grace the waters of Hobart’s River Derwent tomorrow morning, Saturday, 3 February.

It will be the first sail on the Derwent in more than 10 years for the 90-year old record-winning Forster Cup veteran. The boat and her crew are scheduled to leave her berth at the Royal Yacht Club of Tasmania at Sandy Bay about 11am.

The beautiful Huon and King Billy pine vessel will have a lively sail along the Battery Point shoreline where, back in 1927, the ‘TT’ was designed and built.

‘TT’ was designed by the late W. P. ‘Skipper’ Batt, along with Alfred Blore and John Tarleton, and built by Charlie Lucas and 'Chips' Gronfors.

Saturday’s momentous occasion is due to the untiring efforts of the not-for-profit Friends of Tassie Too (FOTT) association. The FOTT has been greatly assisted by a number of Tasmanian businesses and individuals in returning the vessel to Tasmania, and undertaking essential maintenance.

Tassie Too was a standout boat at the national competition for 21-footers, the Forster Cup, winning the prestigious interstate contest a record ten times between 1928 and 1952. The vessel also helped place Tasmania on the Australian (and world) sailing stage.

Uniquely built without caulked seams, the edges of the planks on ‘TT’ were bruised and then tightly fitted to the next.

When launched the water would expand the bruised seam and seal the joint, thus creating a much smoother surface than the regular caulked seams of the other 21 footers.

This combined with the underwater shape of ‘TT’ gave her superior boat speed as well as greater upwind sailing abilities.

Tassie Too, along with other Tasmanian-built 21 footers (Tassie, built in 1925, and Tassie III, built in 1929), brought together or produced many well-known Tasmanian sailing identities.

Designer ‘Skipper’ Batt won the Forster Cup six times between 1925 and 1938, the last at the age of 57. His brother Harry later skippered Tassie Too, as did his son Neall.

Tassie Too was raffled by the Royal Yacht Club of Tasmania in 1955 and later ended up in Melbourne where the vessel underwent an extensive restoration, returning her to her original sail plan. The Friends of Tassie Too brought her back to Hobart last year.

Among the crew today will be Kenn Batt (grandson of Harry Batt, grand-nephew of ‘Skipper’ Batt and Neall Batt, and son of crewman Ken Batt), Greg Muir (volunteer shipwright and younger son of Jock Muir), Stephen Boyes (father Ediss Boyes skippered ‘TT’ in the 1952 Forster Cup) and Peter Makepiece (son of George Makepiece who was the outstanding for’ard hand on Tassie and Tassie Too).

Other members of the Friends of Tassie Too include Ross Muir, (son of boat builder Jock Muir. The Muir, Makepiece and Batt families have been very close of the years), Jenny Keyes (grand-daughter of Harry Batt, grand-niece of ‘Skipper’ Batt and daughter of Ken Batt), Peter Keyes (volunteer shipwright), Brian Moroney (corporate sponsor Doyle Sails) and Colin Grazules (marine historian).