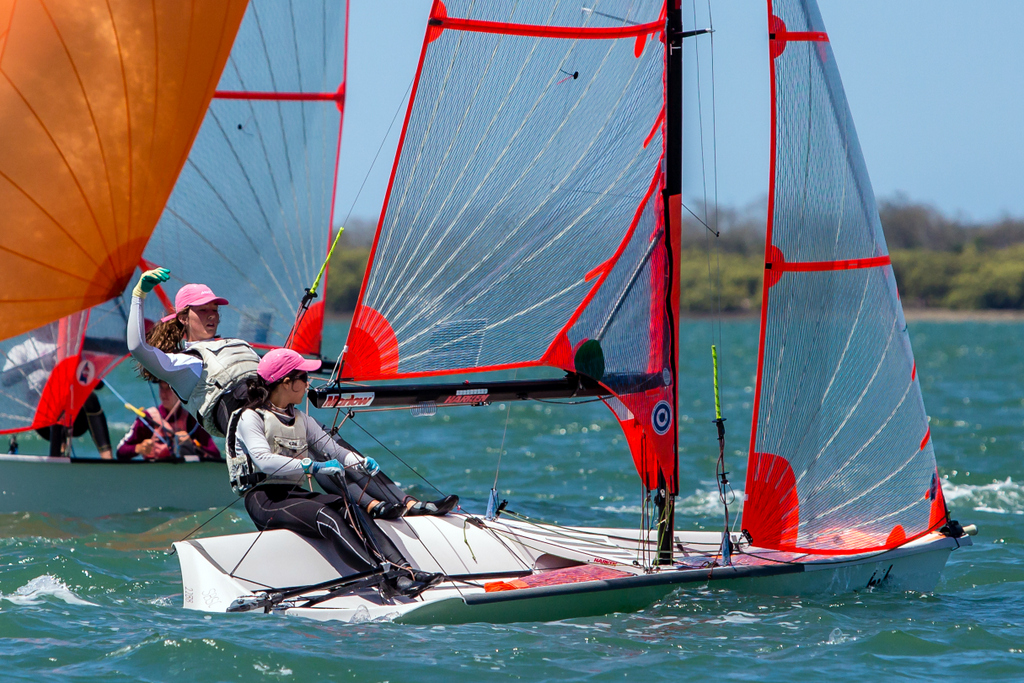 The regatta will be held on the River Derwent, starting with a twilight race for keelboats on Friday evening, 16 February with the off-the-beach classes joining the keelboats and sports boat in back-to-back racing on Saturday and Sunday, 17 and 18 February.

The Tasmanian championships for the SB20 one-design keelboat class and the International Dragon class will be part of the Crown Series Bellerive Regatta which is expected to attract near 200 entries.

Alice Buchanan and Dervla Duggan, both aged 16 and students at The Friends School in Hobart, won the girl’s 29er divisions of the Open National Championship and the Australian Sailing Youth Championship in Brisbane last month.

As a result, the girls have been named in the Australian team for the World Youth Sailing Championships in Texas, USA, in July.

“The 29er Nationals was our first regatta together…I’d changed from being a competitive dancer to a beginner sailor…and the journey began,” Dervla said today.

Last year they were both part of the winning Friends School girls team that won the State, National and Interdominion (AUS v NZL) team racing events.

Troy Grafton is a busy sailor, and has been since he sailed his first Sydney Hobart race as a 19-year-old aboard his father’s goat Kamehameha-Royal Tasmanian Salmon.

“I’ve gone on to compete in 19 Sydney Hobarts…as well as many keelboat and one-design regattas,” he said at today’s launch of the Banjo’s Shoreline Crown Series Bellerive Regatta.

“I’ve sailed aboard the Sydney based TP52 Celestial in the CYCA’s Blue Water Point Score this season, but I came back to Hobart to race with Chris Sheehan in the SB20 Nationals.

“Then it was back to Sydney for the Sydney Hobart and just a few days later I was aboard the SB20 for the Worlds on the Derwent.

“I’ll be sailing in the Crown Series Bellerive Regatta on Scott Sharp’s newly acquired Melges 32 called Crusader and we hope to do well in the Racing division,” Grafton added.

Entries for the Banjo’s Shoreline Crown Series Bellerive Regatta close next Monday, 12 February for keelboats and on Thursday, 15 February for off-the-beach classes.

Among the early entries for the regatta are Bellerive Yacht Club Commodore Graham Mansfield in his Dubois 40 Black Magic and Vice Commodore Ian Stewart with his Mumm 36 Tas Paints.

Today they joined Troy Grafton and the crew of Alice Buchanan and Dervla Duggan in launching what promises to be another huge and spectacular regatta on the River Derwent, an aquatic event based at Bellerive which goes back to 1853.