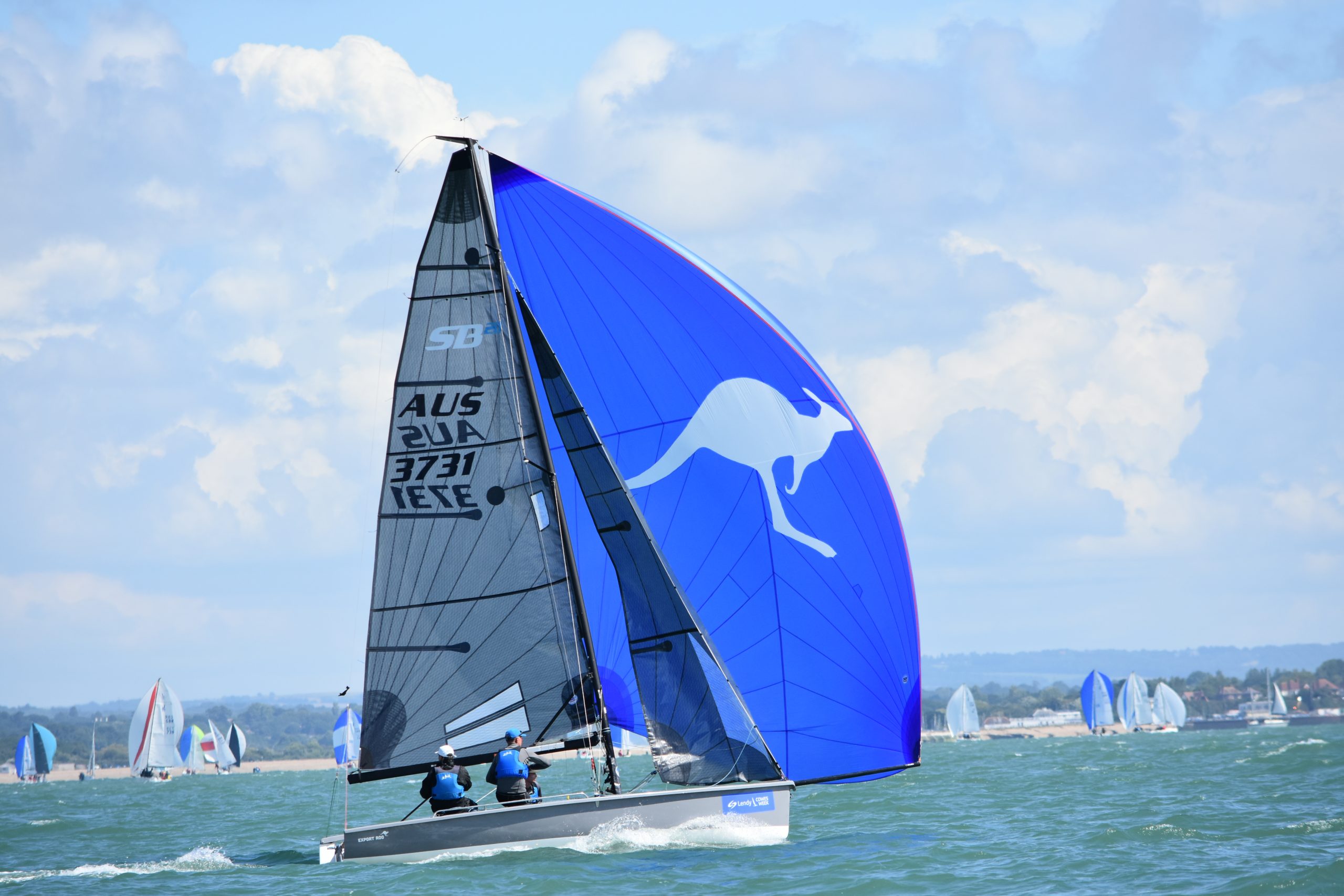 Sailed as part of the full sailing program at historic Cowes Week, the Grand Slam comprised eight races sailed in total and two drops – which had a significant bearing on the final outcome/

The series, a lead-up to the SB20 Worlds at Cowes late this month, was sailed over four days of challenging tides, currents and winds.

However, the final day of sailing provided a steady 15 knots of SW breeze for the 32 boat fleet, sailing on the Solent, off the UK Isle of Wight.

Porco Rosso finished the regatta with a 3-2 result while Export Roo won race seven, limping across the finish line with a broken rudder gudgeon. Towed back to Cowes, the Tasmanians has to retire from the final race.

Porco Rosso went into the final day of racing, after one discard, with a one point margin from Xcellent. With two discards applying after race eight (two thirds) their net sore was 12 points.

In a family reunion on the water, Tasmanian helmsman Paul Burnell was in charge on GBR Marvel (Richard Powell), sailing with brother and chief tactician,  Tim.

Burnell finishing behind, but on equal points, with GBR SportsboatWorld (Jerry Hill), 19 points.

“We have been a little bit disappointed with how we have been going on the start line so we really went for it today in the first race [Race 7]. We just had a left shift at the start and we took advantage of that – we started on port – just crossed the fleet and from there we could do what we wanted”, said Chapman.

However, after a solid Race 7, the crew of Export Roo had it all going on. “We were coming into the finish of the first race and our rudder gudgeon snapped off… quite luckily it was just before the finish with a couple of hundred metres to go so we were able to nurse the boat home – and from there we got towed in,” said Chapman.

“Overall, I am pretty happy with where we are sailing – [The Solent] is a tough place, but for us, the boat isn’t going as well as I thought it would be – there’s a lot of work to do.

“The Porco Rosso guys have been training and they are doing well and they deserve to be doing well…so that’s great for them…but we are a little bit disappointed at the moment. but we’ll be back”, added Chapman.

A standout helmsman during the Grand Slam has been 25-year-old Elliot Noye from Hobart. Noye helmed Porco Rosso and really took it up to the UK locals and the rest of the international fleet with courageous, confident and tight sailing.

Noye was pretty happy with the performance of his team (Paul McCartney/Ed Snowball) on the water. “We needed to beat the Xcellent boat from GBR but he came first and we came second – so it came down to that.

“Overall, it was a very good day on the water for us. We didn’t have a result for the first eight races outside the top three – the boat is going well – we are picking up what’s going on out on The Solent – so it’s all positive,” added Noye.

The final day of the Grand Slam was intense for Porco Rosso. “We had one hairy moment out there in the first race [Race 7] following the British boat through Bramble Bank and we were pretty much behind him a little bit to windward… he went through the bank and we managed to hit the bottom.

“So we stuck fast before we gybed out there. We obviously lost a little bit at this point, which was unfortunate for us as we were running him down a bit downwind.

“But you have to be courageous in this area to get out of the tide to make good gains. It’s definitely very tricky sailing,” said Noye.

Noye also reflected upon the efforts and growing confidence of the Australian fleet leading up to the 2017 Worlds at Cowes and the 2018 Worlds at Hobart.

“It’s great to see all the Aussies coming over here and doing really well – having Michael Cooper and seeing Hypertronics and the other boats rounding the top mark in fourth or fifth really shows the strength of the fleet especially in Hobart – everyone is working with each other and improving – so it’s great to see us doing well on the world stage,” said Noye.