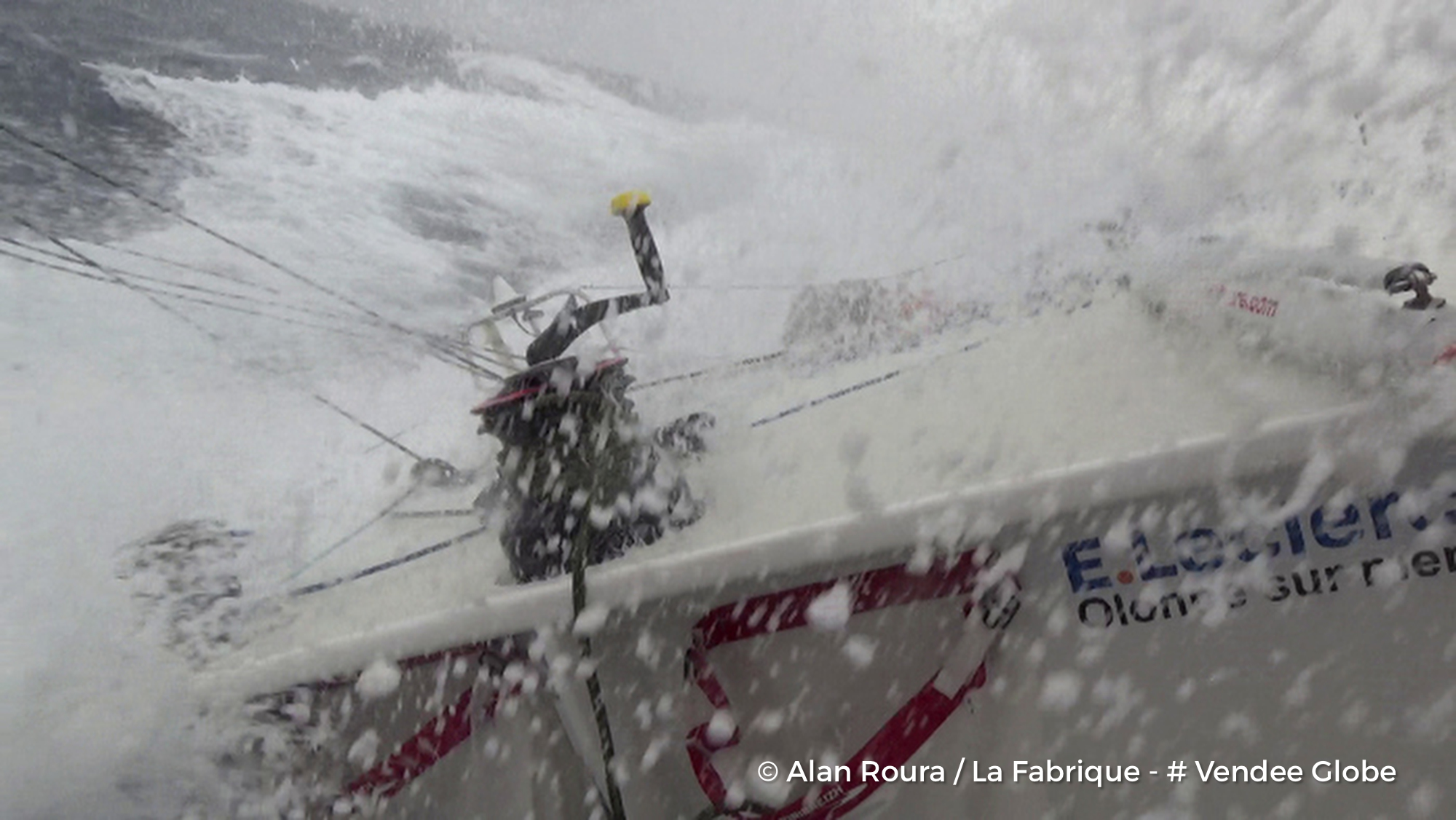 On board during the Vendee Globe. Photo Alan Roura.

There seems to be no immediate respite for the two skippers leading the Vendée Globe, Alex Thomson and Armel Le Cléac'h as they cross the Tasman Sea and approach the longitude of the south of New Zealand in the clutches of an aggressive low pressure system which is throwing big, confused and potentially boat breaking seas at them and gusty, freezing squalls strafing them from the chilly south.

Weather files suggest it will be Saturday evening before they are into better conditions as the low moves east with them. But hard on the heels of this system the Pacific seems set to deal them a second depression on Monday which will arrive from the north, more stress perhaps requiring a strategic choice to be made, how far south to stay? The stress, noise and unpredictable, violent motion of the boats is making any rest next to impossible.

Navigator and meteo coach Wouter Verbraak (NED) – who worked pre start with Thomson and explained to Vendée LIVE today from the Paris Salon Nautic boat show: “The winds are something they can manage, even when the winds are very squally and go up from a force 4 for example to a force 8, maybe even with some snow sometimes, but the biggest challenge the skippers have is that because the seastate behind the front is so confused, the seas are coming from all different directions it is very difficult to find a good rhythm to go fast and not break the boat. However on Monday they are going to meet the next low and this is a very intense low which comes from the north, from the tropics and potentially this could give them headwinds if they stay too far to the south. And so there are some big decisions to be made. It could be a key phase.”

Racing on starboard gybe Thomson has largely held his differential behind Le Cléac'h, measured at 152 miles on the mid afternoon ranking. Thomson and Le Cléach share similar levels of experience in the big south. Thomson has completed three round the world races and of course Le Cléac'h finished second in the last two Vendée Globes and to them it is instinctive, knowing when to throttle back, how to set up for big and unpredictable squalls. The British skipper Thomson spoke yesterday of winds jumping from 18 to 45 kts in a few minutes.

In fifth place Yann Eliès (Quéguiner-Leucémie Espoir) also highlighted the sudden changes in the weather extremes in a video sent today, one minute fighting in a the grip of a front, and an hour or so later enjoying a short, sunny interlude in his cockpit. Eliès will pass the longitude of the point where he was rescued by the Australian Navy after fracturing his leg during the 2008-9 race, but the French skipper confirmed today he did not even know the exact location, but would be extra vigilant. Eliès said: “I don't think about it really. I don't really know when I will pass it, maybe about 300 miles ahead. I prefer to just keep a very close eye on the weather forecasts because it is a very dangerous area between Australia,Tasmania, New Zealand and the ice wall to our south. There is this big low pressure coming next week and so I prefer to think about that. I am not thinking about my adventure of a few years ago, but I do think fondly of the guys who came to save me and the doctors and guys who put me back together. That is all.”

Of the 14 rookies which started the race 12 are experiencing the Vendée Globe in the Indian Ocean for the first time. In third, Paul Meilhat, the 34 years old skipper of SMA has taken to the south with a mature attack which belies his experience and has only 700 miles or so left before he enters the Pacific. But the other first timers are now almost all well into their baptism into the ways of the south. Stéphane Le Diraison at 40 years old has many Class 40 miles to his credit and is doing a fantastic job with the powerful Finot Conq design which started life as Alex Thomson's 2007 model Hugo Boss. Le Diraison lies tenth in a group of five to the North West of the Kerguelen Islands. “Outside it's grey and wet,” Le Diraison reported today. “I am ahead of a front and I'm going to have to put up with these conditions for 3 or 4 days. I have found what I came looking for in the Southern Ocean, in terms of a personal challenge. I know I'm putting myself in danger. You have to find the strength within you that I would not have found if I had been following the Vendée Globe from my sofa. The fact that I'm in contact with four other boat is interesting. That means I have to remain alert all the time. I must admit that some days have been complicated, but that's part of the game.”

One hundred and 70 miles behind him, at the back of this group, is Fabrice Amedeo, the 38 year-old journalist-skipper who has taken a two years sabbatical from his career as a journalist and writer. “I'm missing my family. I have three little girls and I'd have loved to take them to school this morning,” he said this morning. “I'm sailing in 35 knots of wind. It's extremely uncomfortable, but everything is fine on board. The albatrosses are magnificent. They have such a majestic way of flying and such a huge wingspan. The birds are one of the things I have discovered in the South. It's cold, wet and misty. I can't see further than 100m.We are in a wild, rough place; You can feel the air is coming up from the Antarctic. The South is everything I expected. I am surprised though about how fast the weather systems change. I thought it was going to be slower. I talked about it with Arnaud Boissières as he has more experience and he told me it is not going to be as complicated in the Pacific.”

From the same posse in the Indian Ocean, veteran Hungarian skipper Nandor Fa, admitted his nerves were affected by the thought of Kito de Pavant's abandoned Bastide Otio, floating as a ghost ship some 30 miles away from him. Naturally the damaged IMOCA is accurately tracked by race direction just as a race boat and the skippers are all updated with its exact position, but Fa was clearly shaken by passing so close to a reminder of race terminating breakages. “It is a very emotional moment for me. I am sailing about 30 nautical miles north of the drifting Bastide Otio and I am thinking that out here we are all in the hands of god. It is an interesting thought. It is really tough Indian Ocean sailing. It is foggy. I cannot see anything at the moment. The boat is alright and I am too. It is not easy.”

In Simon's Bay, Cape Town, repairs are all but complete for Romain Attanasio. He plans to return to the race course tomorrow. After two days of hard work carrying out these repairs, the French skipper managed to replace his port rudder and repair his starboard rudder without assistance. He is now once again able to continue his solo race around the world. Consequently he is the first sailor in this Vendée Globe to remain ranked after a pit stop. Eighteenth in the rankings before the incident happened 450 miles south of Cape Town he is aiming to complete his first round the world voyage and maybe move back up a few places in the rankings.