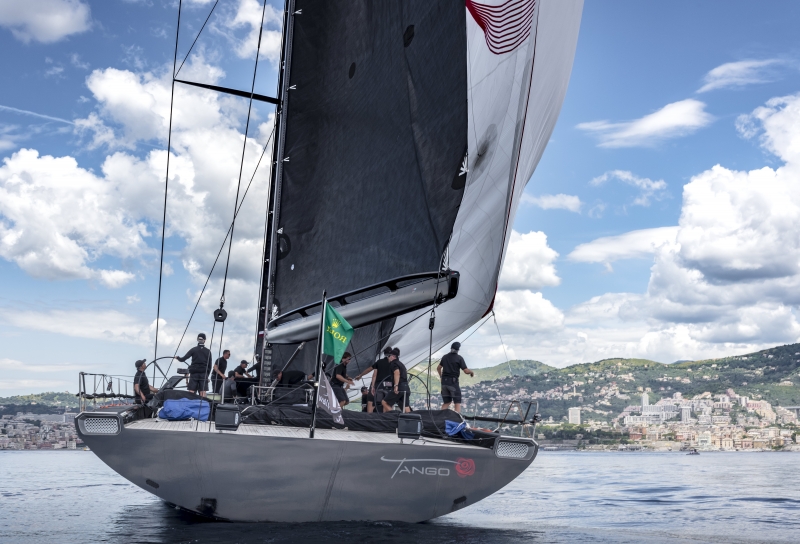 Tango finished the 241-nm race a little over nine minutes ahead of second place Galateia with 2016 line honours winner Magic Carpet Cubed arriving in Genoa some 20 minutes later. In a dramatic contest which went down to the wire, all three Wallycentos held leadership of the offshore race from Saint-Tropez. Indeed, Sir Lindsay Owen-Jones’s Magic Carpet Cubed was the frontrunner at the race’s iconic landmark, the Giraglia rock, in the early hours of Thursday morning.

Although nearly nine hours slower than the current race record, Tango’s elapsed time – just over 11 minutes shy of 24 hours – is the fastest set at the race since 2014.

“We enjoyed the race. It was very intense and interesting with a lot of leadership changes. You could never say who was going to win until we crossed the line. Even ten minutes from the finish line in Genoa it was shifty, with no wind. We rounded the Giraglia in third place to come back into the lead during the last quarter of the race. The last two hours were ultimately the most important.”

“It was quite a seesaw. We stayed in first place from half an hour after the start until the Giraglia rock and then we hit a wall of absolutely nothing and the other two boats passed us. We then crept back into the lead but Tango did something clever and stayed out in the better wind. On the approach to Genoa, we thought we’d catch Tango at one point but it wasn’t to be. It was one of my first offshore races and I really enjoyed it. I would do it again.”

“It was a very good race until the Giraglia for us. We had a fantastic start and then a good passage at the Giraglia. At that point we were in the lead. Afterwards it is a straight run to Genoa. At that game we have to admit that the newer boats were very quick. Tango did a really good navigation. They landed everywhere at the right place. Congratulations to Tango, we had an exciting time.”

At 18:30 CEST, ten of the 212 starters had completed the race. First of the six Maxi 72s to finish in Genoa, Momo currently holds virtual leadership on corrected time.The majority of the fleet were negotiating the passage to the Giraglia rock.