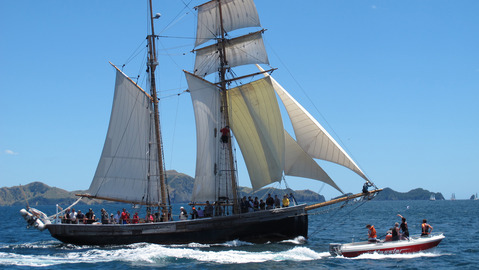 It isn't often that a ship is named Sailor of the Year – but then the R Tucker Thompson is no ordinary ship.

The Bay of Islands-based tall ship, or rather the charitable trust that operates it as a youth training vessel, has been awarded the Northland Regional Council's Sailor of the Year trophy for 2017.

Council chairman Bill Shepherd said the trophy typically went to an individual but it could be awarded for any acts or services which promoted, advanced or bettered the sport of yachting.

“In that regard the trust is an absolutely deserving candidate,” Mr Shepherd said.

Over the past decade the R Tucker Thompson Sail Training Trust had offered more than 1300 young Northlanders the chance to learn life and sailing skills aboard its 26-metre vessel.