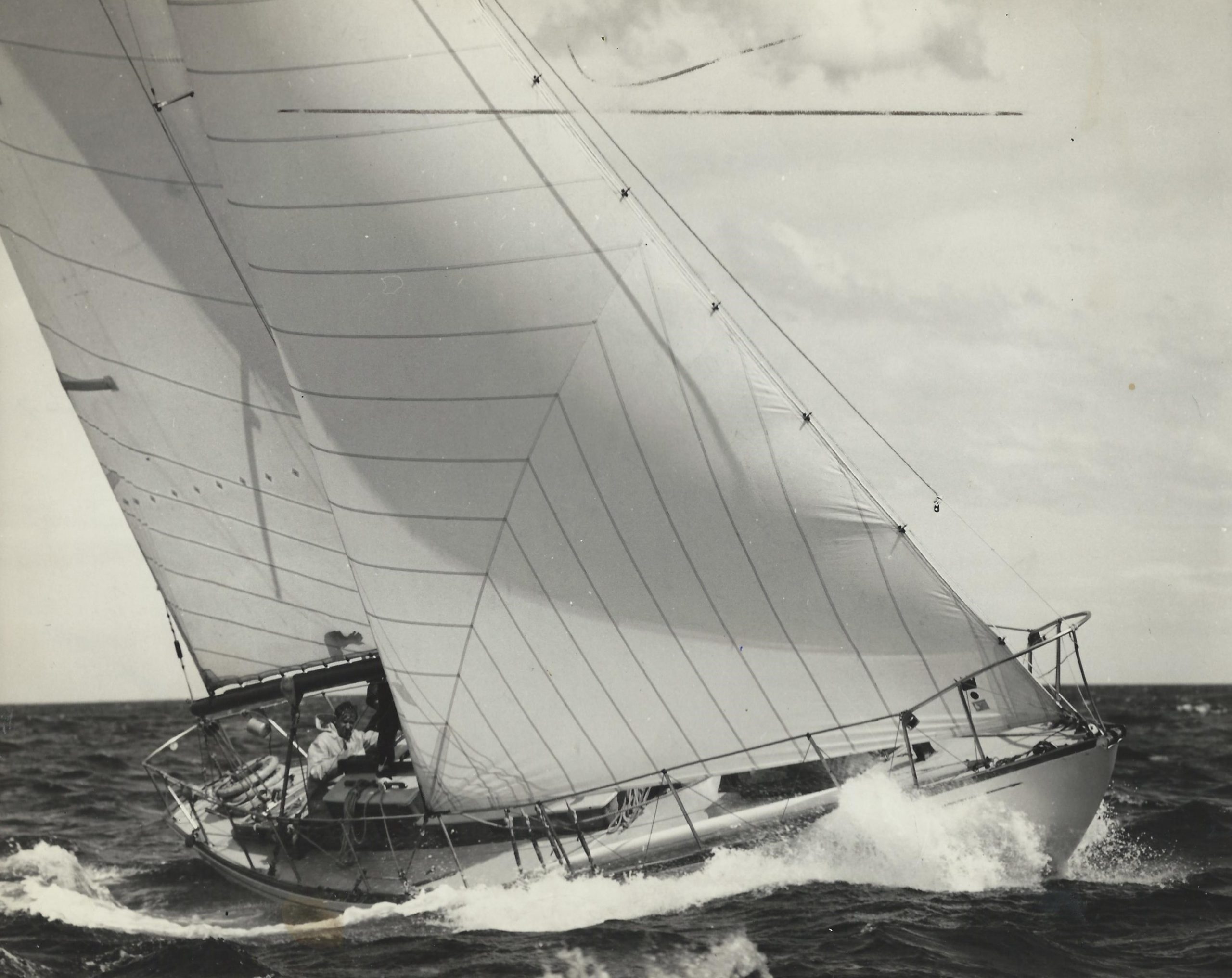 Caprice of Huon at the 67 Admirals Cup - photographer unknown.

If you love old boats, history and a bit of nostalgia, then the three-day Admiral’s Cup 50th anniversary regatta in Sydney starting Friday on Sydney Harbour will no doubt appeal.

It’s been 50 years since Australia won the Admiral’s Cup in Cowes for the first time. It was 1967, following our inaugural participation in the event two years earlier, when Australia finished second in the Cup which was first held in 1957 off Cowes in England.

In 1965 the Australian team comprised Caprice of Huon (Gordon Ingate), Freya (Trygve and Magnus Halvorsen) and Camille of Seaforth (Ron Swanson). The team placed second from eight nations, spurring us on to greater things in this prestigious competition held every odd year.

All three owners are gone now, but the trio led long and rewarding lives. Kaufman, who in collaboration with Bob Miller (later famously known as Ben Lexcen) designed Mercedes III, died early in 2014 at the ripe old age of 94. Crighton-Brown, knighted in 1972, passed away in London in 2013 aged 93. Reynolds the 1967 team manager, a CYCA Life Member and founding member of Middle Harbour Yacht Club, passed away in 2005 aged 84. There is a lot to be said for sea air.

All three will be represented by their sons at the 50th reunion. Scott Kaufman has flown from New York to represent his late father Ted, co-designer and skipper of Mercedes III, Anthony Crighton Brown has arrived from London to sail on Pacha, in lieu of 1967 entry, Balandra, which is currently undergoing restoration, while Sydney brothers Tony and Rob Reynolds will take their late father Gordon’s place on Caprice of Huon, with the boat’s 1965 Gordon, Ingate, skippering.

And because the Admiral’s Cup was a big prize in yachting, we kept going back for more – sailing against the best teams of three from around the world. The peak years were 1975, 1977 and 1979 when 19 nations competed.

Sagacious V’s original owner, Gary Appleby, chartered his successful yacht to the American team in 1987, but will be at the helm of the boat, with seven of his original crew from that era including Bob ‘Bashem’ Fraser, Phil Morgan, Brad ‘Keith’ Stephens, Toby ‘Puppy Dog’ Richardson, Henry ‘Hank’ Paterson and Greg ‘Vengeance’ Johnson

Simon Kurts is skippering Love & War with four of his late father, Peter’s original crew, including Peter Shipway, John ‘Hanger’ Harris, Mike ‘Hessie’ Hesse and John ‘Munno’ Munsen. John Wiggan and Doug Patterson (brother of Henry) will be aboard Caprice of Huon on different days, which will be steered by original owner, Gordon Ingate, who at 91 is still winning major Dragon titles. Sir James Hardy will be at the helm of Mr Christian, while Norman Rydge will steer Lorita Maria, replacing his late father, Sir Norman Rydge.

We won the Cup again in 1979, the toughest on record in which 16 sailors tragically lost their lives and over 100 were rescued in the Fastnet Race, won by Ragamuffin. Our team was Impetuous (Graham Lambert and John Crisp), Ragamuffin (Syd Fischer) and Police Car (Peter Cantwell). Lambert and Crisp will assume control of their next boat, Too Impetuous, while Fischer and Cantwell will watch from support boats.

Race 1, on Sydney Harbour, is scheduled to start at 1pm, then on Saturday the boats will sail a short offshore racing, starting from 10.30am. On Sunday, one final Harbour race, due to start at 12pm. A full social program has also been organised.

Below is a list of entries – some boats are replacing others that are no longer or not available for this celebration event, though their vintage fits. Obviously the same people no longer own the boats, so thanks to those who have come to the party and provided for this special occasion.