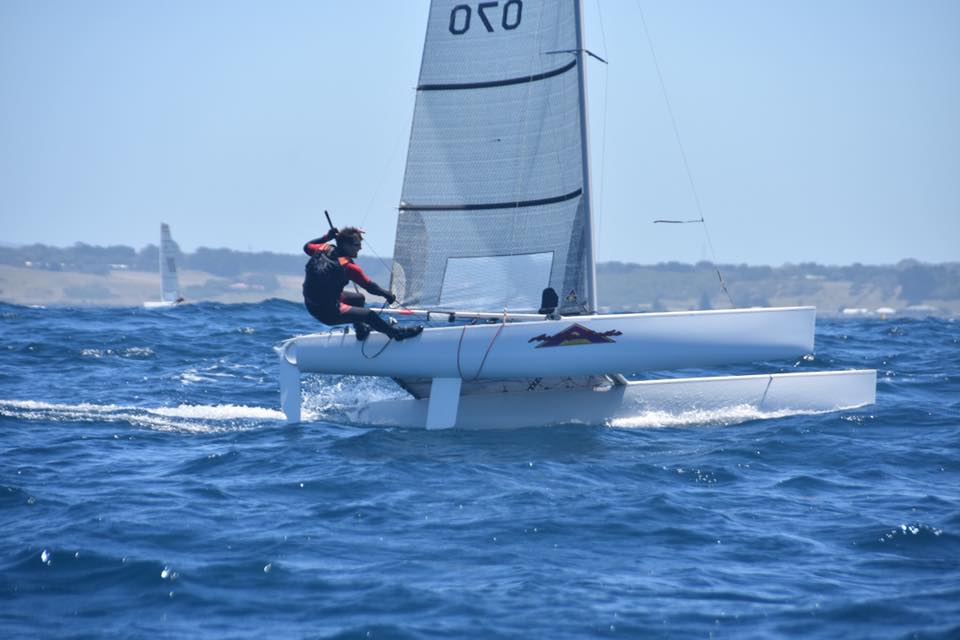 Racing across all fleets was intense, with multiple lead and podium changes during the 12-race event. Off the water, there was a feast of social activities, with a focus on families.

In the Cat Rigged fleet, there were no less than five National champions and three runners-up in the field, making it the most hotly contested in recent years.

There were six different heat winners, and positions swapped on every leg of every race. The title came down to two contenders and wasn’t concluded until the last beat of the last race.

Leigh Hein from Portland Yacht Club (PYC) notched up his second National title from last year’s runner -up, Will Richards from Ballina. Luke Donovan, also from PYC, made the podium in third place, followed by Dave Parker and Ant Richards in fourth and fifth respectively.

New to the Cat Rigged fleet last year, the Master’s category was again in full swing, and was equally hotly contested. Lachie Cameron from McCrae Yacht Club came away with the new perpetual trophy, donated by Craig Harden at Sail trophies, with Wazza Morse second and Mark Colecliffe third.

In the Sloop Rigged fleet, it was fantastic to see the various crew combinations. There were husband/wife, father/son, father/daughter, and experienced/newcomer mixtures. There were four juniors crewing; Caitlin McMahon, Evelyn Floyd, Maxine Jopp and Lachlan Vise.

Racing was dominated by Brad Hein and newcomer Tim O’Toole from PYC, with nine bullets from 12 races. Runners-up were Rohan and Roellen Gillmore from Mt. Martha, sporting a beautiful brand new boat (less than a week old), with Evan Steele/Caitlin McMahon from SA rounding out the top three.

One of the highlights was watching the skippers’ trade places with their crews on the return trip to the port. Their smiles said it all.

There’s nothing like watching 5.7’s screaming downwind with kites flying. This year seven of them meant the competition was wide open. After each day’s racing, the chase for the title was either tied, or there was a point in it.

With scores level and a big breeze on heading into the last day, it was McCrae’s John Newman/Peter Bartlett taking the win by one point, from Kim Luitjes/ Ben Clark from Lake Cullulleraine. Kim’s son Tom came in third crewing for Wayne Hancock from SA.

Another new addition this year was a State of Origin clash in the 4.9 cats and the 5.7 fleets. Using a modified scoring system to incorporate the highest and lowest placings for the event, it was the NSW crew taking out the 4.9 Cats, with the Vic’s romping away with the win in the 5.7’s.

On the social side, this year’s event was outstanding. As it was the TCAA’s 30th birthday, the week started with a sit down Q & A with the designers of the 4.9; Jim Boyer and Greg Goodall. It was fascinating listening to how the boat came about and some wonderful stories of years gone by.

To add to the excitement, this year, the new 4.9 was unveiled straight from the Concept Fibres factory. It has been a labour of love for Rohan and Roellen Gillmore to get this ‘baby’ onto the water and it certainly looked amazing.

Even fresh out of the box, the 4.9 performed extremely well, placing second overall. Rohan, the team at Concept Fibres, Richard Nicholson and Jim Boyer have put an incredible amount of work to get this off the ground, so if you’re interested in purchasing your own, please contact Rohan direct at Concept Fibres on 0412 977 371.

As if this wasn’t enough, a new development sail aimed at attracting youth and female skippers to the class was also unveiled.

Developed with Glenn Ashby and North Sails, the design brief was to create a smaller mainsail, but using the same mast and boom set up. It came out looking a treat with lots of discussion in the boat park.

The sail will be available for use and is currently kept in Melbourne. If you are interested, please contact Ant Richards on 0409 231 980. It will be shared around, but we are looking to purchase a number of sails through the Association to allow all states access. Exciting times ahead.