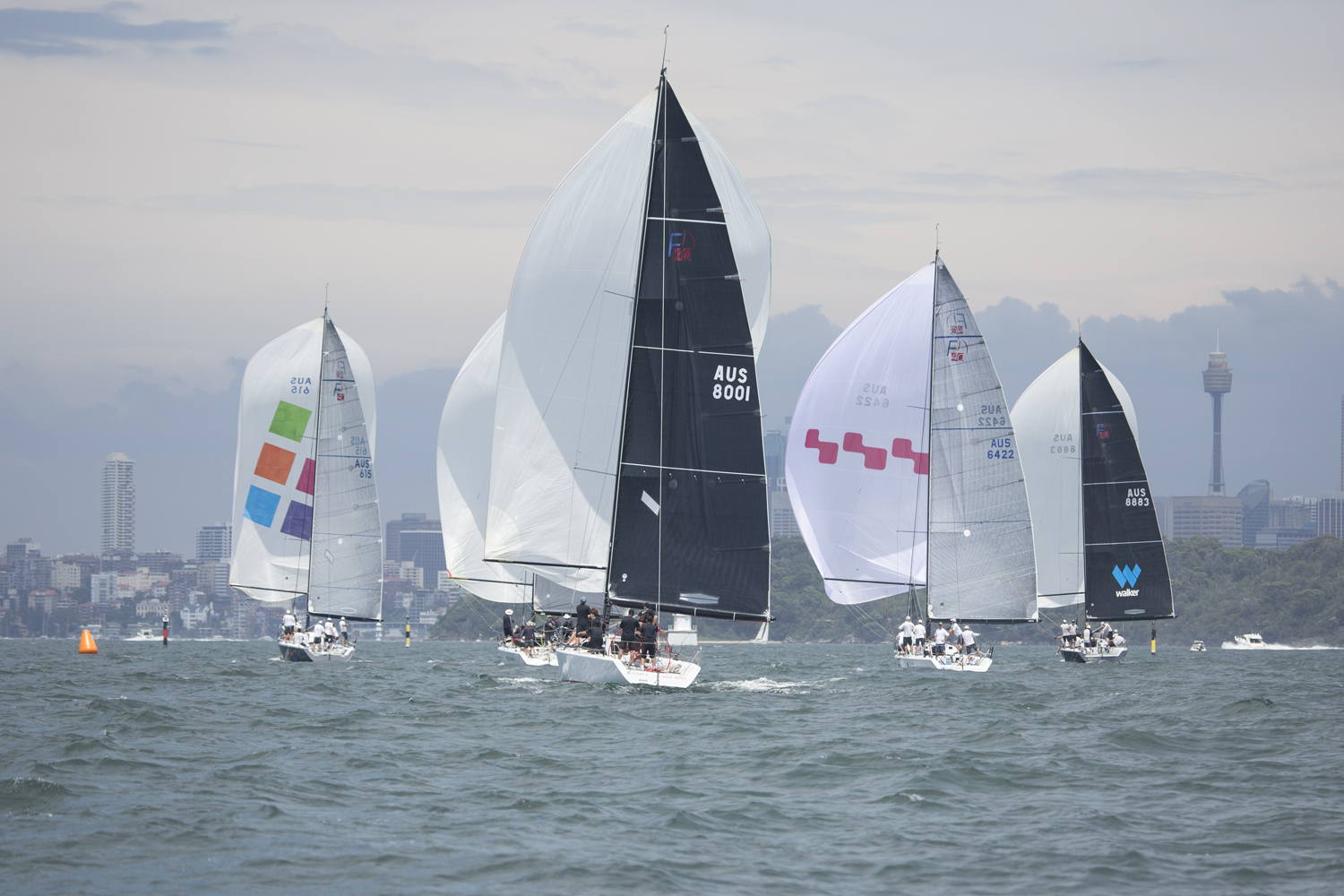 Two races into the Farr 40’s Australian Championship the fleet was ordered ashore for safety reasons as an afternoon storm approached Sydney Harbour from the North West, bringing impressive lightning and heavy rain.

The one design fleet of 10, the best roll-up in the class for some time, each have a carbon fibre mast pointing skyward and Principal Race Officer Phil Yeomans considered it prudent they be tied up at Middle Harbour Yacht Club rather than take a risk by staying out on the Sound, the area between North, Middle and South head, when the storm unleashed.

The three leading boats are tied on five points, Guido Belgiorno-Nettis’ Transfusion ahead of Jeff Carter’s Edake and Lisa and Martin Hill’s Estate Master on a countback. Behind them results varied wildly, much like the weather. Lang Walker’s Kokomo went from first place in race 1 to last in race 2. Rob Pitts’ Double Black from Sandringham Yacht Club in Melbourne scored last in race 1 then fourth in race 2, their best result since joining the fleet.

“We were very happy to be mixing it with Estate Master in both races with good uphill speed and matching them downhill,” said Carter as crews mooched around MHYC waiting for news on whether an early mark would be granted. Not because of the thunderstorm but the dead-zone left in its trail.

“Estate Master are the ones we judge ourselves against, in terms of the international fleet here in Sydney for the worlds. They are on par with Transfusion and today we were on par with Estate,” Carter went on. “It was upsy downsy out there breeze-wise. Our crew work was much better than the NSW titles last weekend; we were a much more relaxed boat. We like to have the underdog tag,” the skipper admitted.

Race 1, a three-lapper, was sailed in 12 knot average nor’easters and race 2, a two-lapper from a new start line in nine knots with more east in it.

Pitts is happy to attribute their marked improvement to new tactician Steve McConaghy joining the program. “It’s great having a local on board who is super experienced. Our result is a huge improvement on the states where we tore the main on the first day. Steve’s doing the national series then the pre-worlds and the worlds with us, other than him we are an all-Victorian crew – now with a spring in our step!”

All owners’ agreed with the PRO’s plan of action to up-stumps as the bad weather approached and head ashore where the situation was monitored. Once the storm front passed Yeomans took the start boat out to find glassy conditions with barely any breeze coming from all directions so at 1500hrs racing was abandoned for the day.

“There’s nothing worse than being out on a boat in lightning and thunder,” said Yeomans. He’s never forgotten sailing as a teenager alongside a boat that was struck. “The lightning strike went along the shrouds and out the side of the boat; it could have been us. You don’t forget.”