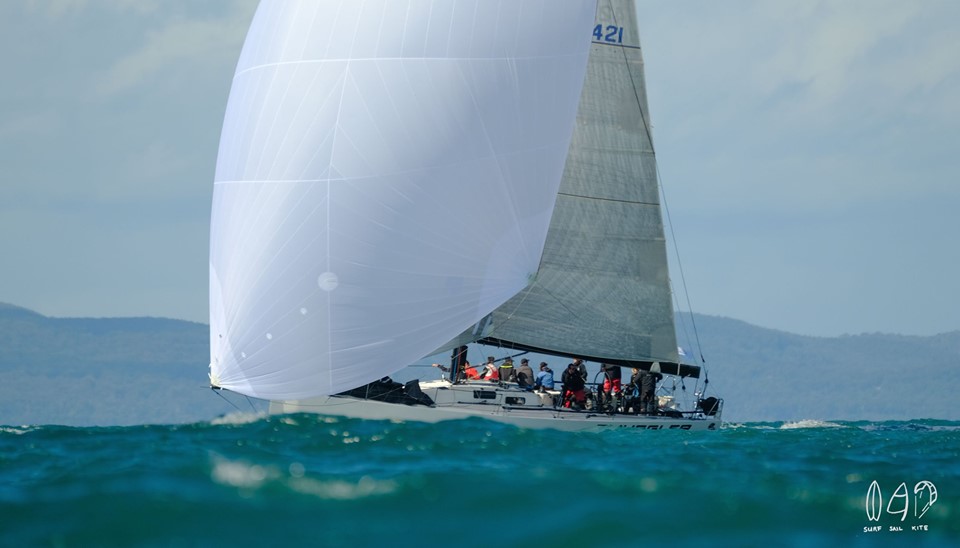 Sebastian Bohm’s Rogers 46 Smuggler pocketed all the key trophies in the 13th Club Marine Brisbane to Keppel Tropical Yacht Race, redemption for three years ago when a penalty cost the crew first place on corrected time.

The start of the annual Royal Queensland Yacht Squadron race from Moreton Bay to Keppel Bay was bolstered by a second fleet racing in the inaugural Lendlease Hamilton Island Yacht Race. Fast running conditions at the start were made-to-order for Bohm’s Sydney boat, which made a clean sweep of line honours, first on IRC and first on PHS handicap in the 348 nautical mile coastal race.

“We are so excited to get the treble,” Bohm said. “After a spectacular start on Moreton Bay the wind blasted in a 20-knots once we reached the open ocean; and no one was going to catch us. It was glamour sailing all the way, and wet! When we dropped the bow down into the waves we had whitewater rushing over the deck.

“The Keppel Race is one of our favourites and it was great to start with a full fleet. We were keeping up with the TP52s until the breeze dropped from 20 back to 13-15 knots. The boat was prepared perfectly and the crew work was fantastic. Provisionally we won three years ago but missed a mark – we were very careful this time. We’ll definitely be back to this race!”

Smuggler will be added to some of the highest calibre names in sailing, including supermaxis Wild Oats XI and Black Jack, on the beautiful line honours trophy donated by finish host, Keppel Bay Marina.

RQYS general manager Shawn Ket was on the ground at Keppel Bay to welcome crews and assist marina staff and local sailing club volunteers with the finish logistics.

“There was a great vibe among competitors at the finish and a strong message that they would return, and encourage their sailing friends to participate in next year’s event,” Ket said. “We received strong support to keep this event going well beyond the lucky thirteenth race.

“As well as greeting sailors after their excitingly fast ride north, I caught up with a lot of other RQYS members. It’s obvious that Keppel Bay Marina is a favoured destination and perfect place to call through on the way to the Whitsundays,” the general manager commented.

On arrival at Keppel Bay Marina, tradition dictates that each crew is welcomed with a pineapple – a traditional symbol of hospitality – a carton of beer, and a Banana Station Beef Burger with a note that says: “Welcome to Keppel Bay, we are famous for our beef, our pineapples and our hospitality, we hope you enjoy all three during your stay”.

“It was unanimous all crews certainly did!” said marina general manager Kylie Wilson, adding: “Keppel Bay Marina would like to thank RQYS for the 13 years we have worked together on the Brisbane to Keppel Yacht Race, the crews who support the event, and the staff and volunteers who work day and night to make it the favourite race on the Queensland racing calendar!”

So important is the hospitality shown to weary crews that those who needed to anchor and wait for the high tide to access their marina berth had beers and burgers delivered out to them via RIB.

“The event is significant to the local community with great media interest and Yeppoon’s deputy Mayor attending the trophy presentation,” Ket added. “RQYS is so fortunate to have the support of Kylie and her team plus Keppel Sailing Club volunteers like the two Pauls – Florian and Effeney – who make Keppel Bay such a terrific destination to finish a yacht race.

“Of course, we can’t thank the competitors enough and we look forward to welcoming the regulars and potentially some new entrants back in 2020.”