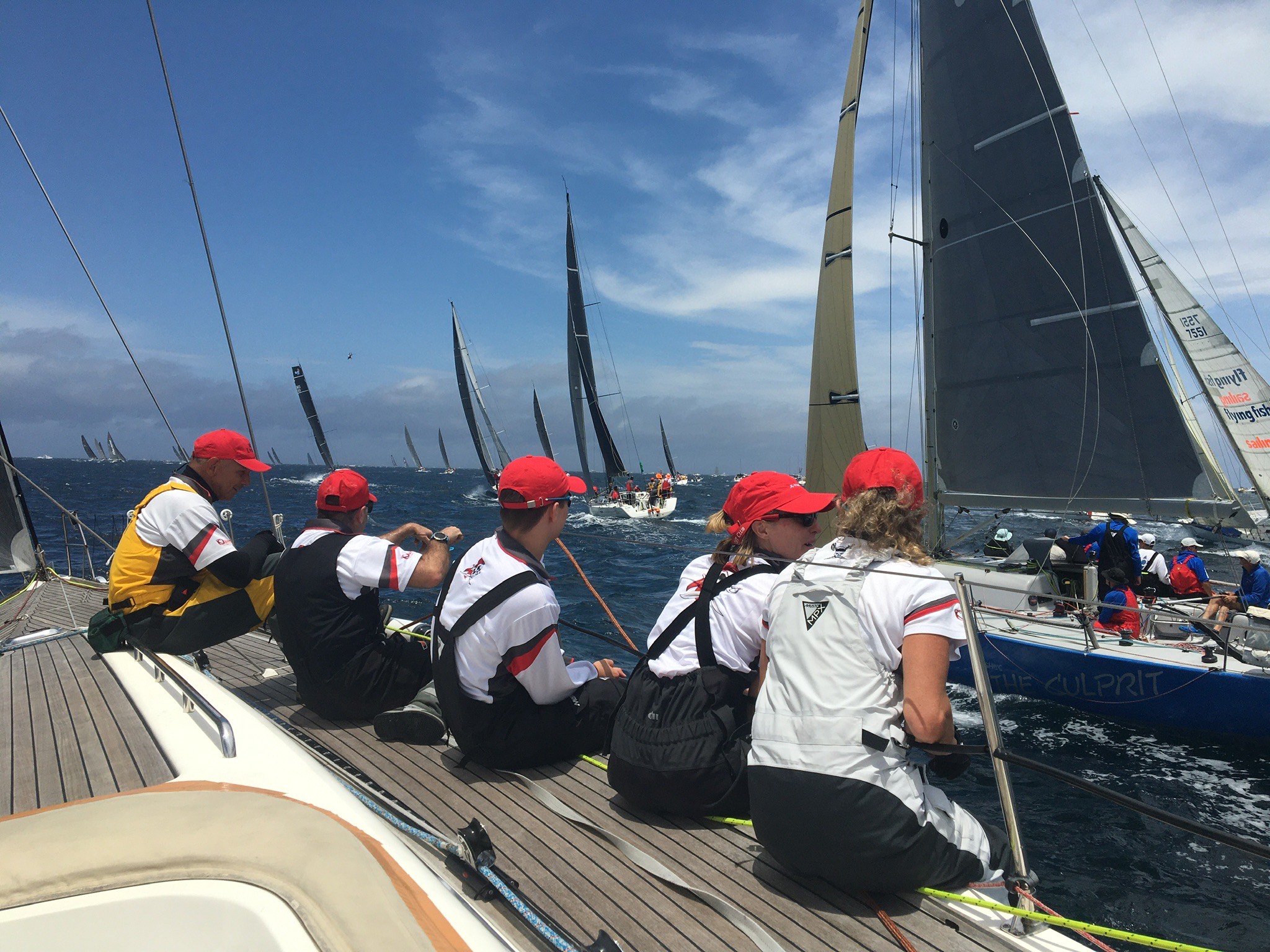 Close to 40 yachts did not finish the 2021 Rolex Sydney Hobart Yacht Race.

Months of hard work was thwarted by breakages, injuries and sea sickness, as the fleet battled against an uncomfortable southerly for the first 30 hours of the 628 nautical mile race.

I caught up with skippers and co-skippers from three of the retired yachts, Wax Lyrical, Maverick and Inukshuk,  who recounted their experiences and the disappointment of having to ‘make the call’.

I was on board the X 50 Wax Lyrical (Cruising Yacht Club of Australia) for my first Sydney Hobart. Almost 24 hours after the race start, co-skipper and owner Les Goodridge made the tough decision to retire from the race.

Like many who competed in the race, I suffered from sea sickness. The unrelenting, up-and-down motion of the waves caused by the southerly winds made conditions on board extremely uncomfortable. Two crew members on board Wax Lyrical were particularly unwell.

Goodridge wanted to ensure there were enough active, contributing crew members when the boat reached Green Cape, where all boats proceeding to Bass Strait have to declare themselves on the HF radio.

“It got to the level where you have to think about health rather than racing,” Goodridge said, from his home in Sydney’s eastern suburbs. “That was the basis of our decision – it’s about looking after the people rather than just finishing the race.”

Wax Lyrical turned around just off Bateman’s Bay on Monday December 27, enjoying downwind conditions all the way back to Sydney Heads to arrive at the CYCA at about 2am on Tuesday, December 28.

Prior to its retirement, Wax Lyrical was placed first on PHS and 18th on line honours.

“Despite disappointment after a substantial build up, you just have to think of it as a race. Fabulous and iconic as it is and wonderful to be a part of it, it’s just a race,” Goodridge said.

This marked Goodridge’s 12th Sydney Hobart (spread over 20 years), and his first retirement from the race.

“Normally you start in a nor’easter [breeze] and the first part of the race is downhill. So, everybody gets used to being on the boat and then the southerly hits you, sometimes 18, 24 hours later.

“That’s why there were so many more people who were sick. It wasn’t horrendous [conditions], the problem was it started straight away.”

Even Goodridge felt sick after bailing out the floor of the for’ead head (this problem was later solved) and then rushing back to do the sked (a scheduled HF radio call with race officials). He began to feel unwell while sitting at the navigation desk, waiting for his turn to radio in. Goodridge grabbed a paper bag, did what had to be done, and continued with the task at hand.

This experience hasn’t dampened Goodridge’s enthusiasm. However, nothing is set in stone for 2022.

“You say ‘never again’ and you come back again the next year.

“I was contemplating – this is 12 races for me, is this enough? Let’s see where we’re at when we get past the first half of the year.”

Maverick (Sandringham Yacht Club), co-skippered by Rod Smallman and Leeton Hulley, was in contention for a podium finish on line honours in the inaugural Sydney Hobart Two-Handed Division.

But their dream ended when what could have been a sunfish collided with the Jeanneau Sun Fast 3600 at about 5pm on December 27, roughly 30 to 35 nautical miles off Montague Island (off the coast of Narooma).

“Geez, it was violent,” Smallman said on the phone from his Melbourne home. “[The collision] pushed us around like a cork. It basically ripped the rudder out of its bearing and jammed it up into the boat – it was significant damage, and gut wrenching.”

Smallman and Hulley managed to get the boat back to Eden. They were then able to repair Maverick so she could hold up for the trip home to Melbourne.

Smallman, who competed on Maverick in the 2018 Melbourne Osaka Cup, an avid two-handed sailor, was devastated not to complete the race for the inaugural two-handed Sydney Hobart division.

He doesn’t know if he and Hulley will be on the start line for the 77th edition of the race.

“I’m a little bit surprised it hurt so much,” Smallman said.

Smallman was overwhelmed by the number of supportive messages he received from family, friends and even strangers following Maverick’s retirement from the race.

A sailor with many accolades, from the Ocean Racing Club of Victoria, sent Smallman a message that resonated with him.

“He said, ‘Sometimes s*** happens and that’s it, isn’t it? You can’t help that.’ And basically that’s the upside of it all. Sometimes things just happen and that’s just that.”

Rob Large and Chris Riggs were also in the inaugural two-handed division on board the Northshore 38 Inukshuk (Royal South Australian Yacht Squadron).

However, on day two an event that was completely out of their control forced their retirement.

In the rough southerly conditions with waves breaking over the boat, water entered via the companionway and leaked into lockers and the conduit connector. As a result, their electronic system shut down. They lost the auto helm and the VHF radio stopped giving a GPS signal.

“We knew something was wrong. We weren’t sure where it was or what it was. I had an idea but by then it was too late,” Large told me on the phone, as he and Riggs sailed back home to South Australia in beautiful 12 knot winds on New Year’s Eve.

Large said that if the leak had occurred during the Bass Strait crossing, they would have kept going. But because they were only a third of the way through the race, they didn’t want to take the risk and continue, especially if something else was to go wrong.

“We can’t go without an auto helm, you just can’t.”

Inukshuk sailed into Jervis Bay where the fitting was replaced.

Prior to their retirement, the duo couldn’t have been happier with their progress.

“We were sailing well, we had everything under control, we didn’t make any mistakes. We were just moving along, doing our thing,” Large said. “We kept our humour up and kept going. We were quite prepared to keep continuing, we just didn’t have full function of the boat.”

Large said they didn’t think their two-year-old electrical system would cause any issues, and they did all they could do to best equip the boat for the race.

“It wasn’t something three months ago where we could have said, ‘We’ve got to fix that.’ We didn’t do some crazy crash gybe that broke our main or stay. It was a malfunction. I couldn’t imagine it was going to be a problem. It was a bit of bad luck that landed on us. I’ve never been annoyed at the outcome based on that. Sometimes things just happen.”

Although their initial plans were to complete the Sydney Hobart and then convert the boat for long distance cruising, Large and Riggs will more than likely be back for more two-handed racing in the 2022 Sydney Hobart.

“Having a few days off racing, what’s creeping in now is unfinished business.”