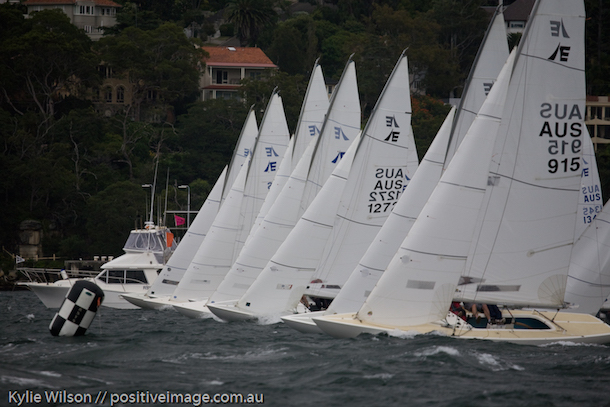 A big fleet of Etchells will be racing with the Royal Sydney Yacht Squadron this summer. Photo RSYS.

Other clubs, including Middle Harbour Yacht Club and Sydney Amateur Sailing Club,  will start their harbour racing next weekend while the Cruising Yacht Club of Australia’s first short ocean racing is scheduled for next Saturday, September 12.

Major events on the Harbour over the summer include the CYCA’s Big Boat , Challenge, Sail Sydney, the fnish of the Clipper Round the World Race leg from Albany in Western Australia, the start of the Rolex Sydney Hobart Yacht Race, the Farr 40 Australian and World championships, and the spectacular Extreme Sailing Series.

Although the RSYS began its 2015-2016 racing season today, the Squadron’s traditional Opening Day will be held next Sunday with a colourful parade of sail and a garden party on the lawns at Kirribilli.

In today’s racing Charles Curran’s Sydney led the Division 1 fleet around the Harbour course to take line honours, but it was former Admiral’s Cup skipper Graeme Lambert who won the race on corrected time with his Sydney 36CR, Too Impetuous.

A fleet of 14 Etchells turned out for the opening race, with Richard Hammond taking line honours from with Alchemist by 32 seconds from Ciao (Doug McGain and Michael O’Brien), third place going to Wobbegong (Doug Flynn).