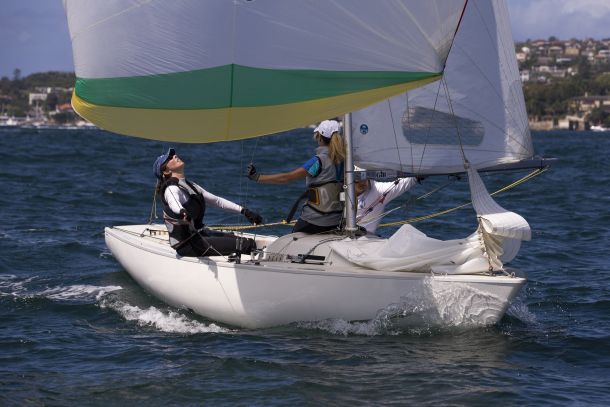 Light weather ensured that most started a little late at Middle Harbour Yacht Club for the beginning of the 10th anniversary Sydney Harbour Regatta being held this weekend, but once underway, all 180 boat crews had a wonderful autumn sail to start the weekend.

“It was very wishy-washy offshore – a lot of swell. It’s some of the hardest racing I’ve done,” Tony Kirby admitted. “The race committee shortened the first windward/leeward to one-lap because it was so lumpy with little breeze.

“Nine Dragons got a great start in the second race and we chased her around the course but couldn’t catch her on time. Having said that, I’m very happy with the boat, this is the first time we’ve sailed it in light breeze since getting modifications done late last year.

“We got to within a minute of Ichi Ban (Matt Allen’s Carkeek 60) at one stage and were only just behind Hollywood on OneSails Racing (Ray Roberts and his Farr 55) – so we’re pretty pleased with ourselves,” he ended.

Division 2 leader, Howard Piggott, has come to the Regatta on the back of a third place overall in the Grant Thornton Short Ocean Pointscore, winning that final race. Today, the CYCA past-commodore kept the impetus going, with two wins and a third place for a one-point advantage over local boat, JustADash (Phil Dash).

And it was no surprise to find Peter Sorensen (The Philosopher’s Club) at the top of Division 3’s leaderboard. The Middle Harbour YC sailor ruled the day with three straight wins to take control of his rivals. Matthew Bassett’s Local Hero lived up to her name, securing a fourth and a pair of second places for second overall to take into tomorrow’s final three races.

The Yngling, VX-One, J70 and Cavalier 28 classes elected to hold their respective NSW Championship at the Sydney Harbour Regatta.

Two wins either side of a second place gives triple Olympian Karyn Gojnich (Evie) the lead in the Yngling States from Hamish Jarrett with Miss Pibb, who squeezed a win between two second places.

“It was great to see so many Ynglings (10) on the start line and to be on Sydney Harbour at its best,” said Gojnich who last represented Australia at the 2008 Olympics in the Yngling.

“We’re quite excited by our 1-2-1 results, made all the more enjoyable because I’m sailing with my great friend Alex Murray (married to Iain Murray) and we haven’t sailed together for a while. She’s doing bow and loving every minute of it – and we’ve got Ruth McCance in the middle, she’s a very experienced Yngling sailor.”

Of the conditions, Gojnich said: “You had to be on your toes today; there was an outgoing tide and a shifty breeze that couldn’t decide if it wanted to be north-east or east-north-east – the races certainly weren’t over till they were over,” she ended.

In the Cavalier 28, Craig Mitchell’s Centaurus leads Brian McConaghy’s U2 in the charge for their Championship title, just one point between the two after three races have been put to bed.

The VX-One’s also completed four races in their Championship, with Andrew York’s well-named Speedwagon coming up with the goods with three bullets and a third – you can’t beat that. Three points behind him is Fred Kasparek’s also well-named Weapon of Choice, sitting nicely in second place. Their two remaining races will decide the new NSW champion.

The Super 30’s came out in their number at the 10th anniversary of the Sydney Harbour Regatta, 17 various sporty designs from Flying Tigers to Melges 32’s, Swarbricks to Sydney 32’s kept spectators entertained with their speed and antics.

Chris Way’s Easy Tiger, a Melges 32, leads the class, his win and second place keeping him in top spot after he dropped to an uncharacteristic 15th in Race 3. Michael Rowe (Bullet, a Bull 9000) and George Kompolthy’s one-off Mojo are champing at the bit on equal points just one behind Way, while there others in the running just waiting their chance tomorrow.  behind.

The former Olympic class 5.5 Metres joined the event in a class of their own for the first time. And relatively new skipper, Barbara Zussino, acquitted herself well by tying for a win in Race 1 in the Vaucluse Yacht Club dominated fleet. However, Bob Stoddard’s Skagerak, the lone entry from the Royal Prince Alfred Yacht Club and who tied with Zussino in the opening race, leads the class following two more wins. Peter McDonald’s Pam from Manly Yacht Club fills out second place.

Perhaps the prettiest show stoppers at the Regatta, the Historical 18’s sailed a full Harbour course in their preferred conditions. Top Weight had the goods at the end of the day, David Swales overcoming challenges from second placed Tangalooma (Peter Legrove) and third placed Scot (James) Watt. The normally prolific Yendys was nowhere to be seen.

“We were late to the start, for which we apologise,” said Yendys’ skipper, Bob ‘Killo’ Killick. “What a magic day on the Harbour, win or lose,” he said.

So many classes at the Regatta precludes us from mentioning all, however we will endeavour to cover the remaining classes tomorrow, the final day of MHYC’s signature event.

Admittedly the wind was a little slow to materialise, so racing on most courses was delayed as officials waited for the beginnings of a north-east and east-nor-easterly wind to fill in before sending the multitude of classes on their way.

However, there was no room for complaint once racing was underway shortly after 12.3pm in light airs that built slowly throughout the afternoon, delivering good racing for all.

Competitors can cap off a pleasurable weekend of racing at the Sydney Harbour Regatta tomorrow, with 9-14 knot southerly winds expected.

All results are provisional pending protests. For provisional results: http://www.shr.mhyc.com.au/