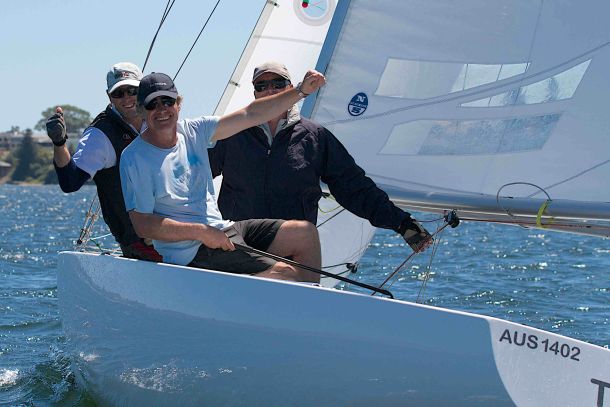 A nervous start to the final day program left points leader Michael Manford seemingly vulnerable in his quest for another State title in the Etchells class. In breeze which has just turned from east to west and was still settling, Manford took the option to go north while the majority of the fleet took to the south side. At the first rounding of the top mark, Manford had just four boats behind him. He recovered a little to finish thirteenth, but it meant that he would now have to carry an eleventh placing from race 2.

Dirk Vander Struyf came to the rescue with a win in that race, followed by Raymond Smith, while Peter Chappell was forced to sit the race out due to a black flag disqualification. Manford’s other main rival, Martin Webster, scored a fifth so his position remained relatively secure.

To underline his superiority, Manford jumped out of the blocks smartly in the final race and with the breeze now settled and blowing at a steady 12 – 15 knots, rounded the top mark a few boat lengths clear and as he had done several times earlier in the regatta, pulled right away for another comfortable win.

There was a log jam of three boats tied for third place. Peter Chappell, who was black flagged in race 5 and finished a disappointing tenth in the final race, eventually placed third on a countback. With Simon Sutherland, young gun Chris Charlwood and match racer Peter Nicholas on the crew, Chappell loomed as the one skipper who might challenge Manford for the title after the first day and he was clearly gutted by his disqualification.

Losing out in the countback calculations were Brad Sheridan, who finished the regatta with a hard fought second in the last race, and the super reliable Alistair McMichael.

There was some disquiet about sailing a State Championship on the Swan River at this time of year but Michael Manford put it into perspective well in his acceptance speech. “It was hard work out there” he said. “One minor mistake can punish you in these conditions as we found out this morning. But that’s the attraction of sailing on the Swan River. You get a mix of conditions and you have to work hard for a result.”

It was also pretty tough on the race officer Kim Laurence. He was patient in the shifty conditions and at the end of the day, his judgment proved to be spot on.