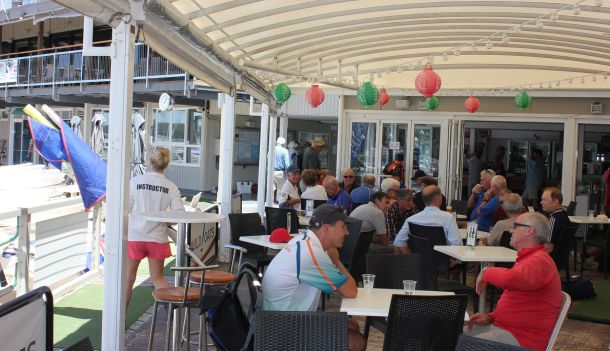 Business as usual as yachties relax ahead of racing at MHYC yesterday - MHYC pic.

In light of a recent fire in the Cala Luna restaurant at Middle Harbour Yacht Club, Commodore John McCuaig sends a clear message: “The club itself suffered little more than water damage and the Sydney Harbour Regatta is definitely going ahead.”

To be held over the weekend of March 7-8, entries for the 10th anniversary of NSW’s largest sailing regatta have passed the 150 mark. The Club is hoping for 200 by the end of the week and has extended late entries to midnight Tuesday February 24.

“We want to celebrate the 10th anniversary in style. We have some new sponsors, fabulous prizes and would love to see a big turnout for the farewell to Sydney’s warm weather racing,” the Commodore said of the autumn regatta.

All divisional winners will go into a draw to win a trip for two to New Zealand for a six-night luxurious cruise around the Bay of Islands. Courtesy of Air New Zealand and Island Escape Cruises, the total package is valued at over $9000.

A second and third draw will reward a lucky winner with an antifoul and lift courtesy of Sydney City Marine and a three-night holiday escape to Hamilton Island in the Whitsundays for two, courtesy of Hamilton Island. Accommodation at the Reef View Hotel includes a full buffet breakfast. (Airfares are not included).

Some of the most recognised identities in sailing are entered, including Matt Allen (Ichi Ban), Tony Kirby (Patrice) and Ray Roberts (OneSails Racing). Local DK46 sisterships Nine Dragons (Bob Cox) and Khaleesi (Andrew and Pauline Dally) will resume their battle in tandem with racing against the rest of a hot fleet.

An abundant Super 30 entry will spark stimulating competition, while others will enjoy the competition in the NSW Championships across the Yngling, VX-One (OD), J/70 and Cavalier 28 classes. The usual stoush is expected amongst the Adams 10’s, the Historical 18ft skiffs and X-Yachts, while the International 5.5 Metre and J/70’s will compete as separate classes for the first time.

SKUD 18 gold and silver Paralympic medallist Dan Fitzgibbon will reveal his latest sailing escapade with the aptly named ‘Another Challenge’ in the Performance Class (Spinnaker). Fitzgibbon chose the Sydney 38 for the first Integrated disAbled Sailing (IdS) program which he launched at the Royal Prince Alfred Yacht Club in February 2013.

Fitzgibbon has long dreamed of the challenge of able-bodied and crew with disabilities blending together on one boat. Originally owned by yachting legend Lou Abrahams, the Sydney 38 has been adapted and according to Fitzgibbon, “Anyone with a severe disability can use this technology, but this is the first time it’s been used in this way.”

Come and celebrate the 10th anniversary of the Sydney Harbour Regatta and take part in the Club’s beach barbecues, drinks, live entertainment from party band Peppermint Jam on Saturday from 4.30pm and a raffle prize from Helly Hansen drawn on the Sunday.

In a revised format for the 10th Anniversary event, a special edition prize giving presentation will now be held on Monday 9 March at MHYC from 6.30pm for 7.00pm. The organising committee will formally announce this change with an official Notice to Competitors in the coming days.

Online entry and Notice of Race at: www.shr.mhyc.com.au/