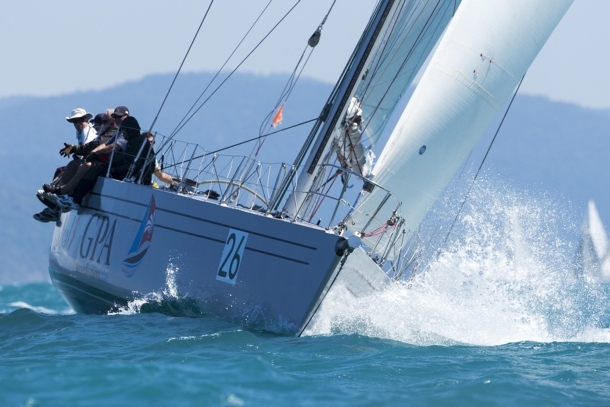 With the July 10 Close of Entry deadline approaching, yachts representing a wide spectrum of eras are among the most recent signed on for the 2015 Land Rover Sydney Gold Coast Yacht Race, bringing participants to 60 for the race which starts on Saturday 25 July.

Built in 1984, Rob Fisher and Paul Mara’s Helsal 3 is a heavy yacht from the ‘old school’ of thinking, while Ray Roberts’ much lighter and faster OneSails Racing exudes the latest in technology and power.

It is an art to make an older boat go fast, and takes even more ability to sail one to its full winning potential – and that is what Fisher and Mara did with their 31 year-old Adams 20 in last year’s race, organised and hosted by the Cruising Yacht Club of Australia.

“It would be nice to win PHS two years in a row and we’ll certainly be giving it a good try,” said Fisher, who will skipper the yacht, while Mara navigates.

“We (he and Mara) both missed the last Hobart race and I feel the boat suffered for it,” he said of their 71st over the line and 15th overall in PHS. “So we hope to make her go faster again to rectify that situation.

“I’m not saying I’m the best sailor in the world, but the old girl goes better with me aboard – I’ve known her for so long, so let’s hope I can keep that tradition,” ended Fisher, who used to call Sydney home.

Fisher’s family purchased the yacht, originally owned by the late Arthur Bloore and known as The Office, for a second time in 2007. She was in a rundown state, requiring a full refurbishment under the eye of Fred Barrett, to bring her back to standard. The family’s third yacht carrying the famous Helsal label had been raced with success in the late 1980’s and early 1990’s before they sold her.

Helsal’s polar opposite is OneSails Racing, the Farr 55 Roberts purchased from Michael Hiatt late last year. Although it is approaching eight years of age, the former Living Doll is nonetheless constructed of carbon and since Roberts’ purchase, has been optimised and carries an up-to-the-minute sail wardrobe from crew member and OneSails’ Asia manager, Bruce Anson.

In December, Roberts burst back onto the Australian scene. With OneSails Racing, sporting a distinctive stern emblazoned ‘Team Hollywood’ amid a scattering of stars (depicting Roberts’ nickname of ‘Hollywood’), and won Division 1 of the CYCA Trophy Series. This after a five-year stint in Asia, where he raced other yachts to victory at all the major regattas.

The Sydney businessman went on to finish 49th overall in the Rolex Sydney Hobart. The weather, for the first time in a long time, did not favour larger yachts.  He knows the best is yet to come; the yacht finished second overall in the 2011 Hobart and won the Sydney Gold Coast Race the same year.

“I’m back and looking forward to the race,” said the 2006 Ocean Racer of the Year who is aiming at the overall win under IRC.

“To win you have to get your boat and crew fully prepared and then work on speed. You have to take a very analytical approach, keep meticulous records of how the boat performs in different conditions. You must never lose sight of your overall strategy,” ended Roberts whose main competition will come from the TP52s and Cookson 50’s.

Other recent entries heading north in the 384 nautical mile race, which has been on the CYCA’s yachting calendar since 1986, are Amante (Dennis Cooper), Le Billet (Mark Tinworth) and XS Moment (Ray Hudson), all of which competed last year.

Art Equity Mahligai (Murray Owen and Jenny Kings) and Stampede return having last contested the race in 2011, the latter with new owners Michael McDonald and Jon Lattimore, and Victoria’s Russell Durham is bringing his 2014 launched Smooth Operator for its first tilt at the race.

Spectators wishing to view the start of the race can do so from the comfort of COAST, where there will be no better view than from its top deck. For details and bookings go to: http://goldcoast.cyca.com.au/spectators/

Entries for the Land Rover Sydney Gold Coast Yacht Race close on July 10 at 1700 hours, and officials are urging prospective owners to sign on now via the official race website: http://goldcoast.cyca.com.au/