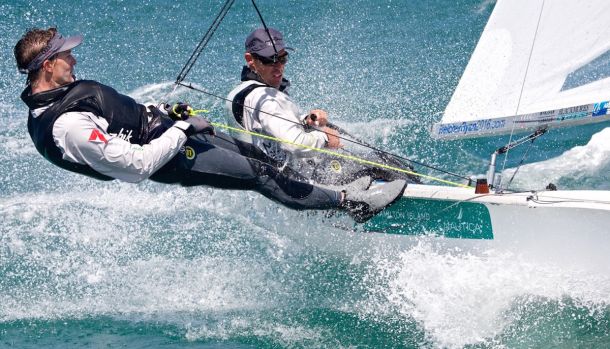 The 2015 470 European Open Championships will be the first regatta and is open to athletes from across the globe, who will be competing for the Open Trophy. 2014 World and European Open Champions Mat Belcher and Will Ryan recently finished the ISAF Sailing World Cup in Weymouth, UK (10-14 June) with a silver medal and are looking forward to more racing as part of their preparation for the Rio Test event in August (15-22 August).

“We had a quick break after Weymouth, with some fitness training and warming up after the UK weather. The timing of this event works well as although it’s close to the Weymouth event, we are now moving along the build up of the year towards the Test Event in Rio next (August) and the World Championships later in the year (October),” Will Ryan explained.

“It’s great to be in Denmark and all the top teams are here including all medallist skippers from London 2012. We have high standards for ourselves and expectations are high. Plus we have multiple European titles to defend – two for us as team, another one for Mat,” he added.

In Aarhus, the pair will introduce their new boat “Bewitched” to racing action. “Bewitched” is named following the tradition (started by Mat and previous crew Mal Page) of naming boats after Nicole Kidman movies and was christened by renowned Women’s 470 sailor Ruslana Taran, one of Victor Kovalenko's former sailing athletes from Ukraine and three time Olympic medallist.

“It’s really nice to be able to launch 'Bewitched'. We were very fortunate having Ruslana to be able to christen the new boat! She is an amazing sailor and hopefully indicates good things to come with the new boat!” Will Ryan said.

Belcher and Ryan will spearhead a team of four Australian Sailing Men’s 470, including the two recent additions to the Australian Sailing Squad (ASS) of Angus Galloway (QLD) and Joshua Dawson (NSW) as well as Victorians Tom Klemens and Tim Hannah, who were selected to the team following a 470 Draft program earlier in the year.

Coached by Australian Olympic gold medallist Nathan Wilmot, it will be the second international regatta for both teams. Klemens and Hannah come to Aarhus after their first event together at Kiel Week where they qualified for their first medal race and finished eighth overall:

“Kiel was our first regatta together as new team and having teamed up just a few months ago our goal was simply to learn to race together as a team. It was a really nice bonus to make the medal race. While it was a smaller fleet there was certainly a few of the top teams racing which made for some very tough racing. The Europeans will give us another great racing opportunity before our peak event for this trip the Junior Worlds starting in a few weeks,” said Tom Klemens.

In the Open Women’s 470 Will Ryan’s sister Sasha Ryan (QLD) and crew Amelia Catt (TAS) will represent Australian Sailing at Aarhus after a 13th place finish at the ISAF Sailing World Cup Weymouth and Portland.

On the other side of the Atlantic, a six boat strong Australian contingent will start racing on 2 July at the 2015 Laser Standard Men’s World Championship in Kingston, Canada (29 June – 8 July).

The World Champs will see a continuation of the Australian battle between current Laser World #1 Tom Burton (NSW) and World #2 Matthew Wearn (WA). Both are vying for the Australian spot at next year’s Rio Olympic Games, with ISAF regulations permitting countries only one entrant per nation.

In the first instance though, the battle will be over the selection spot for the Rio Test event in August with the Laser World Championship the final regatta in a series of selection events for both sailors.

Both Burton and Wearn form part of a strong Australian Laser squad, which will be represented with six boats at Kingston, underlying the current strength of the Australian Laser program coached by Olympic bronze medallist Michael Blackburn assisted by former Australian Sailing Team athlete Ashley Brunning.

The Laser Standard Men’s World Championship first day of racing is 2 July with two races scheduled each day at 1130 local time and running over seven days from July 2 to Wednesday, 8 July.

Australians at the 470 Europeans: