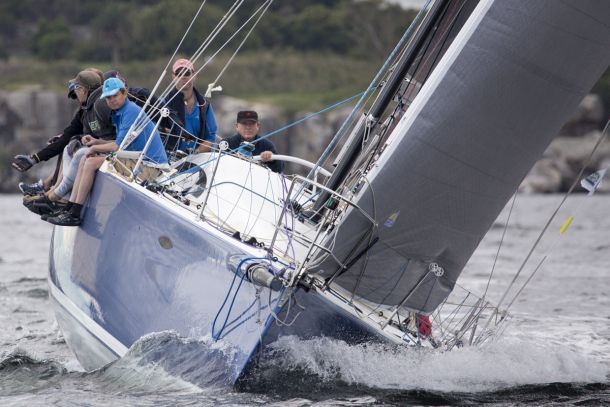 Huntress has a mammoth lead in Division B - David Brogan

Race nine of the Land Rover Winter Series was again a game of cat and mouse as light fluky airs prevailed and set the scene for the final pointscore race next Sunday – some are in a win or lose scenario, while others are carrying a clear advantage.

More light winds, predominantly from the west, soon became light airs of next to nothing. It became apparent to the Cruising Yacht Club of Australia’s Principal Race Officer, Robyn Morton, that shortening the course for the 100 starters in the Series’ penultimate pointscore race was the only option.

“Everyone got away well and were sailing nicely up to Bradleys Head, but the breeze started to die and by 1.30pm, it had gone around to the south-east and dropped to 2-4 knots. From there, it came and went, so I shortened the course to one lap.

“I’m just happy that all 100 starters finished the race – they should be happy – the last boat came up to the line just before 3.00pm. Apart from another week of light and complicated conditions, it was a beautiful day out.”

Competitors also had to grapple with an incoming tide as they left the start line, but it was an altogether pleasant day on Sydney Harbour, with crews basking in the sun to leeward between crew duties.

Damien Parkes steered his JV52, Duende, to a third victory in Division A1 of the Land Rover Winter Series, levelling the pointscore with last week’s leader, Darryl Hodgkinson’s Cookson 50 Victoire, which finished sixth today; her second worst race of the Series.

“We’re trying so hard to win – it’s been ages since I’ve won an event – I was suffering from trophy withdrawal so badly I went out and bought myself one a few weeks ago,” Dr Darryl said tongue-in-cheek.

With six points between the top two and third placed Balance (Paul Clitheroe’s TP52), it will all come down to the final race next Sunday.

In Division A2, Les Goodridge was over the moon to see his X 50, Wax Lyrical, in the box seat.

“It’s been years and years – maybe 15 – since we won a Winter Series Race,” Goodridge commented. “We’ve had a few seconds and thirds, but not a first, so that’s great. We’re going to celebrate back at the Club with a glass or two of wine.”

Goodridge said it was a day when paying close attention was key: “We nailed it by a few seconds only. It was quite close all day. Prime Example (Leigh Dorrington) and Wasabi (Bruce McKay) overtook us and we had to work hard to get them back. There were a lot of boats with us at the top mark too. It was imperative to concentrate really hard if you wanted to win.

“Our boat is a heavier boat, so we had to try extra hard. You had to use the incoming tide and stay in clear air to make an impact in the very light breeze. But it was a beautiful day out – you can’t complain about living in Sydney and sailing on the Harbour.”

Goodridge said he was pleased they have moved into third overall with an opportunity to win the series. Five points off the lead and two points away from second place, he commented, “Playstation (Dean Harrigan) is leading and will be hard to beat, as will Kerisma (Matt Wilkinson/Andrew Wylie/Dion Morrison), but never say never. It will be all to play for next Sunday.”

On the other side of the coin, Crusader, James and Skeeter share Division E lead on 21 points apiece, with fourth placed Tigger on 22. It does not get any closer.

Each week, one lucky division winner is drawn to receive a Land Rover Range Rover Evoque drive experience for a week. This week the lucky winner was Cyrene 3, which racked up her fourth Division C win.

A second draw is held for a lift stand launch and two free laydays courtesy of the Noakes Group and that prize went to Sea Rug Hoo Ha, which today scored its third victory in Division G.

Race 10 on Sunday July 5 brings the Land Rover Winter Series pointscore to an end. The following Sunday, July 12, will close the three-race Ladies Day Series when female skippers will sail for the Chris Lee Trophy.