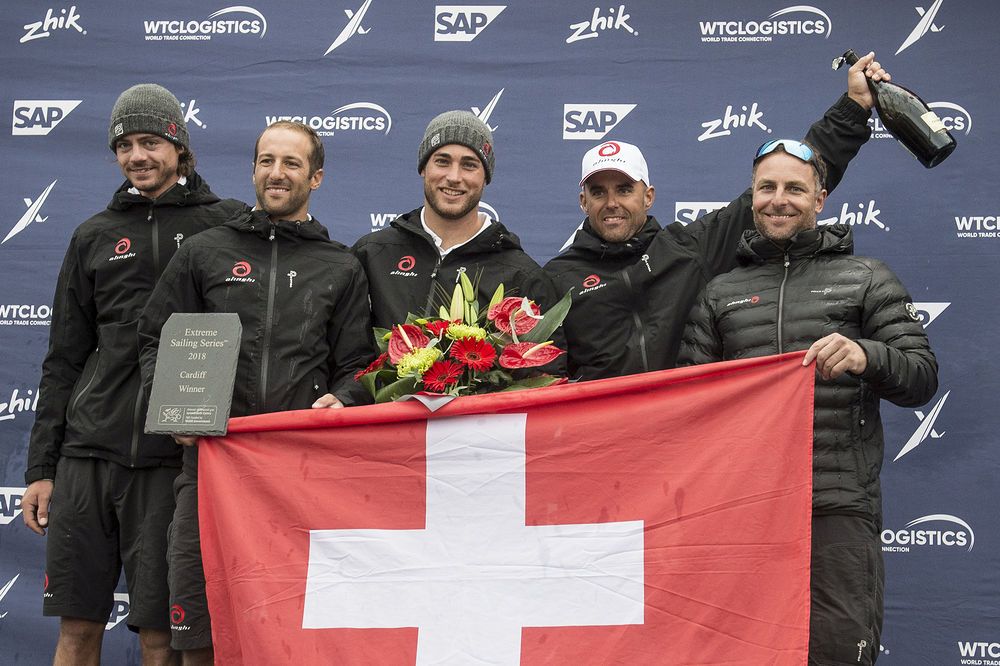 Having climbed the ranks throughout the Extreme Sailing Series Cardiff Act, Alinghi – the Swiss kings of foiling – seized victory from the clutches of SAP Extreme Sailing Team on the final day of the event.

In a nail-biting finish to an incredible four days of racing, Arnaud Psarofaghis, Yves Detrey, Nicolas Charbonnier, Bryan Mettraux and Timothé Lapauw headed into the all-important double points final race just one point ahead of their Danish counterparts. A third place finish saw them crush SAP Extreme Sailing Team's hopes of an Act victory, securing Alinghi's fourth Act win of the season – the first time the Swiss have won in Cardiff in the six years that they've competed in the Welsh capital.

“A fourth Act win feels really good,” said an enthusiastic Psarofaghis, co-skipper and helm for the team. “We didn't actually start very well in Cardiff, with our headsail trimmer Nils Frei suffering an injury on the first day. We fought back and it's great to win here for the first time.”

It was a gutting end to what looked like an otherwise promising competition for SAP Extreme Sailing Team. Having led the regatta since the first day, the Danes were hopeful for a taste of the glory. However, an OCS (over the starting line early) on the final race cost them dearly, relegating them to the back of the fleet for much of the race. They eventually crossed the line in fourth, securing them second place on the Act podium.

“The mood was pretty dark when we were called over the line,” admitted the team's disappointed helm, Adam Minoprio. “We tried our best to fight back but we still ended up losing to Alinghi. We're only two points behind them on the overall leaderboard though, and there are still two events left in San Diego and Los Cabos. Mexico is a double-points Act so we just need to be strong from now on.”

It was another podium clocked for Phil Robertson and his crew too. Team Oman Air took an impressive six top-three finishes on day four, including pole position in the double-points last race.

“It was a great way to finish the event,” enthused skipper and helm Robertson. “It would have been nice to climb another spot, but we're definitely improving Act by Act.”

Cardiff delivered every season over the course of the UK bank holiday weekend. From glorious sunshine to strong winds and torrential rain, the talented sailors were pushed to the limit as they navigated the tricky course in ever-changing weather conditions. For Team México, the weather couldn't be further from what they're used to.

“It was pretty windy,” said bowman Danel Belausteguigotia. “We actually capsized on training day which was pretty cold for us as Mexicans! We're looking forward to the end of the season in Los Cabos, for sure!”

Finishing just ahead of the Mexican contingent was Austrian challenger, Red Bull Sailing Team. A string of inconsistent results saw them place fifth in the Act behind INEOS Rebels UK – Red Bull Sailing Team's fourth fifth-place finish this season, broken only by a fourth place finish in Barcelona. Still, the team remained in high spirits as they stepped onto the dock.

“The wind in Cardiff makes it a really fun place to sail,” explained Hans Peter Steinacher, Red Bull Sailing Team Sport Director. “It's challenging because of the wind speeds, so you'll struggle to get back up the leaderboard if you fall behind.”

It was a busy day for Kiwi sailor Olivia Mackay, helming the Team Wales GC32 in the afternoon and her Red Bull Sailing Team Flying Phantom just hours before. Although Team Wales finished the Act in seventh place, Mackay sailed her Flying Phantom with finesse throughout the competition, taking the Act win in the Flying Phantom Series with crew Micah Wilkinson.

Despite their string of struggles with logistics and boat damage this weekend, it was French foiling superstars, Antoine Rucard and Solune Robert from Team France Jeune, who were crowned overall champions of the Flying Phantom Series.

“It all began with a little problem with Solune's passport,” said crew Antoine Rucard, speaking of the issues they'd had. “He only arrived a couple of hours before the first race! Then we had a rather amazing capsize that broke the mast, before damaging our foil case on the following day. In the end, we made it onto the Cardiff podium which meant we won the Series. A hard event, but worth it.”

As the Cardiff Act draws to a close, it's all eyes on San Diego, USA – the next stop on the circuit's ten-month tour, in an event presented by SAP. Heading to the Californian coastline from 18-21 October, the Extreme Sailing Series US Act promises to be a tough match for the elite level GC32 fleet, and an action-packed spectacle for the Series' global audience.

Propspeed chosen as coating of choice by Riviera Australia