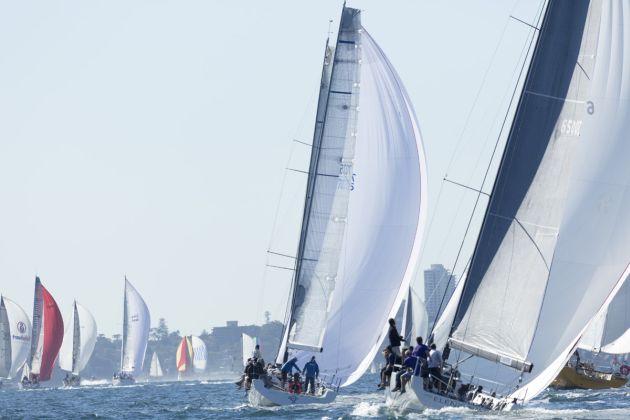 The day started out with pressure - credit David Brogan www.sailpix.com.au.

The sun was out, but shame the wind didn’t want to play ball for the penultimate pointscore race of the Land Rover Winter Series, forcing Principal Race Officer Denis Thompson to shorten the course when the wind fizzled out on Sydney Harbour.

However, the light air that created more holes than a golf course at times suited Steven Proud’s Swish down to the ground. The Kernan 44 won Division A1 for the second successive week (her third series win) – and was also drawn to win the Noakes prize for the second week running.

“That’s just what happened – an exact repeat of last week, despite it being a drifterthon,” Proud said.

“Coming to Steele Point, we went wide and sailed around UBS Wild Thing and The Goat (Sebastian Bohm/Bruce Foye). They elected to sail close to shore, while we took what looked like the losing leg, but it turned out we went the right way.

“As I said last week, the light airs suit us and I’ve had good people calling tactics. Last week it was Billy Sykes and this week it was Murray Gordon,” the yachtsman said.

“I’m hoping we can pull off the hat-trick next week and win the series. We’ll have to be at our best – and more light weather would help,” Proud added.

In Division C, Rum Jungle (Lost Boys Syndicate) consolidated her series lead with her third win of the series. Like Swish, the Swarbrick 40 has been enjoying the lighter conditions that have been the trademark of the series. Her scoreline also includes a trio of second places and a pair of thirds, which have been utilised as drops.

“We were last boat off the stick in our division, but we got a good start and caught them by the time we reached Cannae Point at Manly,” co-owner, Scott Russell, said. “Then we proceeded to fall into the biggest hole near Nielsen Park and got stuck there for about an hour.

“Of course everyone passed us and I was ready to pack it in, but then as most of them reached the LM4 mark, we got into a breeze of our own, set a kite and sneaked around them. It was a frustrating day, but we got there in the end.

“It’s pretty exciting going into the final race, we’ve got a five-point lead on Bennie and the Jets (the Beneteau First 40 owned by John Griffin) who won last week when we were second, and finished second to us today. It’ll all come down to next week…”

Denis Thompson, Principal Race Officer of Race 9 of the Cruising Yacht Club of Australia hosted series summed up: “The day started out pretty good with a 10 knot westerly. It looked promising, but was dying by 1pm. We had to make a decision on whether to shorten or not, and we shortened.

“The wind died quickly after that, and it was a matter of grabbing what zephyrs you could and finding those little pockets of breeze.

“Zora (Pacific Sailing School’s Salona 45) was last boat to cross the line. She found herself in a little nor’ easter and carried a kite for the last mile or so – a nice way to finish,” Thompson ended.

The lucky winner drawn to receive the use of the Land Rover Evoque experience for one week was Division A2 winner, Komodo (Jason King).

Sailed on Sydney Harbour each Sunday during winter, the pointscore component of the Land Rover Winter Series comes to a climax next Sunday when the winners are decided in the 12 divisions. Some divisions will come down to the wire, such as Divisions A2 and G, where the top two are on equal points, while others are more defined.

Next Sunday also denotes the return of the Land Rover Twin Terrapod experience between 8.30am and 4pm on the hard stand.

The Twin Terrapod is a trailer based off-road simulator that allows the vehicles to climb between 43 and 48 degrees, achieving a height of nearly 6 metres above the ground on the hard stand. It is an exceptional way to experience the capabilities of the Land Rover and Range Rover, so don’t miss out.

Yachties will experience one more race the following Sunday, the final Ladies Day race for the Chris Lee trophy, which also decides the overall winner of that three-race event.