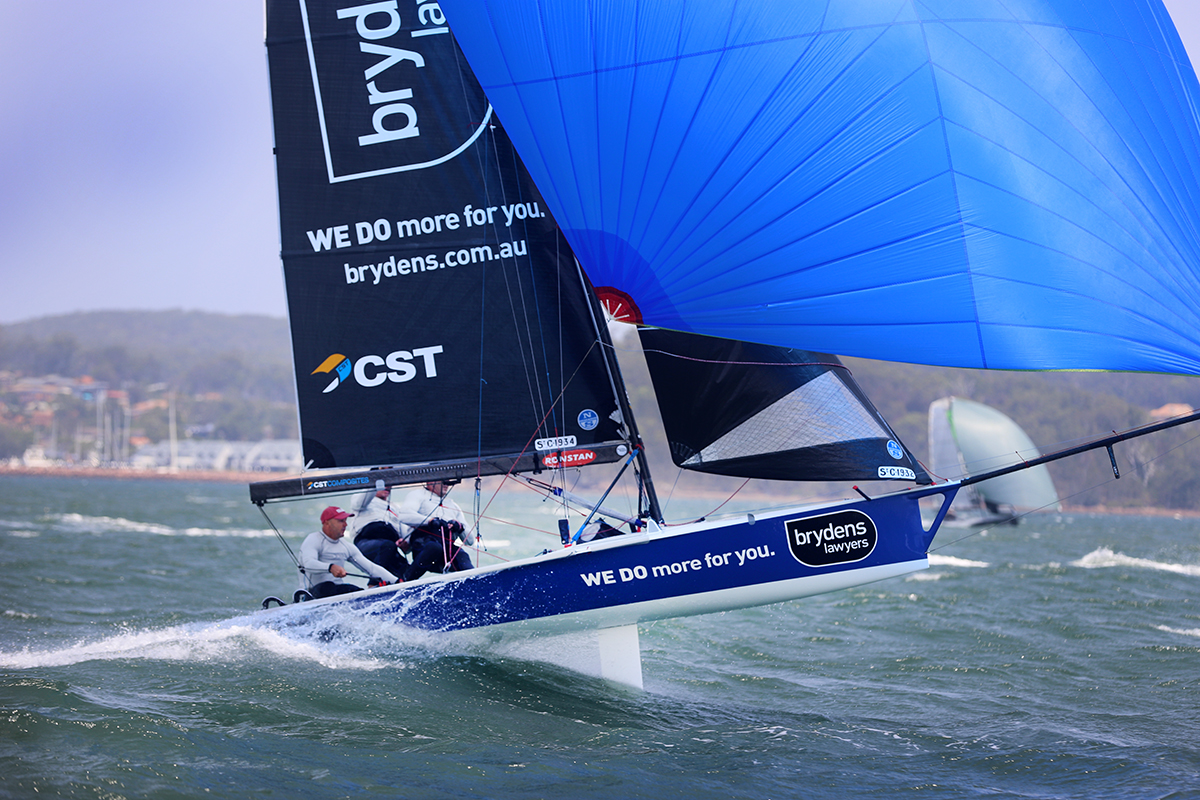 With a snowy-haired squadron of 16ft skiff ol’ boys watching intently from the club veranda, the young guns of the class gave a sublime exhibition of power sailing in heat 8 of the 2020 Australian 16ft and 13ft Skiff Championships at Port Stephens today.

Boats were regularly getting airborne as they clocked speeds of 20 knots downwind, and over 10 knots upwind, as the long-awaited sea breeze finally arrived to greet an outgoing tide.

The heavy-air specialists couldn’t have been happier, after the light-air brigade had made their charge over the past three days.

Both Manly and Belmont skiff clubs had organised coaches to bring the older sailors to Port Stephens Sailing and Aquatic Club, and with beers in hand they marvelled at how far the 16s have come in design and performance.

On the point-score there was plenty to play for, and Sutech Musto Racing roared back into contention with a powerful win that restored their overall lead and confidence levels. Indeed, if there’s a fine line between pleasure and pain – as the song maintains – skipper Daniel Turner and his crew of Angus Williams and Matt Stenta crossed it today.

“The moment the breeze came in today, we just became completely relaxed,” Turner said. “You just go back to everything you know, everything you train for, and you can just sail these boats how they’re designed to sail – that’s fast and fun.

“There were still plenty of calculations to be made out there and we made good gains upwind and down.”

It elevated the Manly crew to three points clear of Koreman Marine Composites and Brydens Lawyers, who scored an 11th and third placing respectively today.

“After yesterday we were a little frightened to do the sums, but this win puts us back up there and hopefully tomorrow we can take it away,” Turner added.

Second home in the big breeze was Matt Rhys-Jones, Joel Castle and Corey Hamilton on East Coast Marine. However, they are currently lying ninth overall and wondering “what if?”

They had also led in the heavy-air race one, only to slip back after a trapeze harness broke.

“We finally got the nor’easter that we wanted all series, and no breakages to go with it,” a smiling Rhys-Jones said. “We came around the first top mark in fifth or sixth but we tweaked a few things and the boat just got faster and faster with each lap.

“There weren’t many passing lanes but we got Brydens on the last bottom mark. Sutech was just too far in front though.”

Fourth today were Will and Richard Howard, along with Jamie Woods, on Burger Bros. The Howard brothers had contested the recent Rolex Sydney Hobart aboard the TP52, Celestial, but transitioned easily back to the 16. They are currently lying eighth overall.

A southerly change is predicted to hit tomorrow at around 20 knots, making rig selection for the final race an intriguing decision.

Three other skiffs – Newcastle Financial Planning Group, Growthbuilt and Tooheys Extra Dry – could all come into calculation if any of the leading three fall back into the 51-strong pack. Racing on Saturday is expected to start at 1pm.