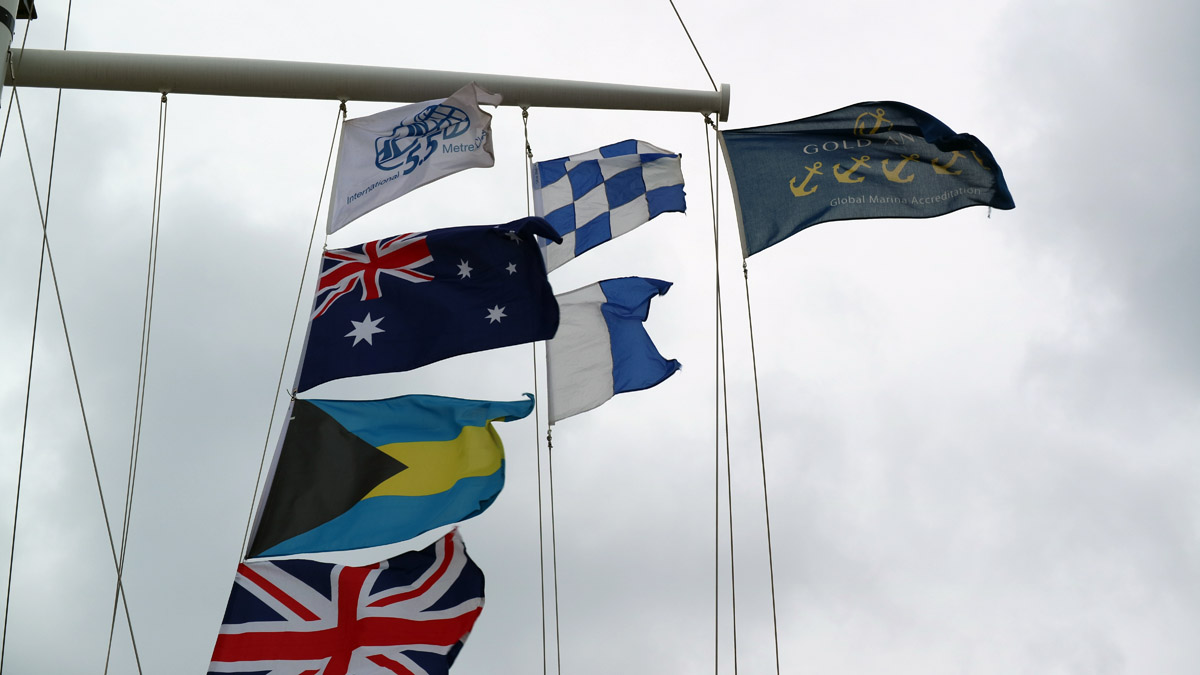 At the scheduled race time there was 2-3 metre high breaking waves and the fleet was held onshore for 2 hours to wait for the sea state to abate. Bravado from some sailors to go sailing did not influence the race officer, who was prepared to wait it out, so crews waited around the club all morning in the hope that racing would take place in the afternoon.

Finally, with the wind still whistling through the rigging, though it was only 18-22 knots on the course area, crews were released from the club for a 14.00 start time. However, before long they were back.

As the race committee boat rounded Barrenjoey Head, it became apparent that racing would not be viable due to the heavy and confused seas and everyone was sent back to the club for an earlier than planned German class dock party.

Of the number of new owners buying new and reused boats, one is very familiar to the class. Colin Ryan took the opportunity of the world championship being in Australia to visit to look over the boats with a view to rejoining the class he last sailed in 2005.

He also organised previous world championships in Australia; 1986 and 2001 in Newport, and in 2005 on Sydney Harbour. Three of his old boats are taking part this week: Carabella, King’s Cross and Tangalooma (then called Sic Em Rex II).

Though he stopped sailing the class for 15 years, Ryan never lost his enthusiasm, and will be back later this year having agreed to buy Otto at the end of the regatta. It will be shipped back to Norway, where he will campaign it on the European circuit.

“Carabella was my first boat in 1978. I had her for a couple of years and then went into the Worlds here in 1980 at the Alfreds. I was a newcomer to the class. I took a couple of employees from the factory and went sailing; they had never sailed before.”

“I got hooked and then we started with Warren Muir [who paid a flying visit to the event last week] and so my first two boats were Warren Muir designed boats. In the 1980s, he was having great success. The boats were winning world championships and at that time it was the design to have.”

“I engaged Warren and we got two and I sold one to another sailor and took the other boat to the worlds in 1985 in Newport, California. Warren and Bob Stoddard [sailing this week on Beta Crucis] crewed for me. So I was really hooked and continued to build, buy and sell 5.5s right through to 2005.”

Then “life’s bumps in the road” took him out for 15 years.

“We got into the top 10 at the worlds and would regularly win the Australian Championship. But I was so intent on the building process sometimes that I didn’t have enough time to campaign problem.

“It was a big effort in those days to campaign from Australia. It had to be a full on exercise and it was a long time way from your business. The regattas were much longer back then, often over five or six weeks. You would have one race a day instead of two. So you had to allow for all of that.”

What attracts him to the class?

“I think the class and the fact that for me, it is a development class, so I could be involved in the design process and the building process. In the early days any design improvement was rather dramatic compared with now, when they are miniscule and questionable whether you really have made an improvement or not, but in those days you could really get a jump and so that for me was very much an attraction.”

“Warren’s designs at that stage monopolised the class, which then became the Warren Muir/Ben Lexcen design, which was the next one. It went from a classical 5.5 Metre to a big skiff, so it had a canoe body with an appendage, and it was a totally different sort of boat.

“That maybe worked for five years and then gradually the weight started to go up and the form started to change and there was more success in another design, which was the Melges boats, driven by Frank Tolhurst.”

King’s Cross, sailing this week, was Tolhurst’s first boat, which he campaigned for the 1968 Olympics. “He had many boats and always engaged the best designers of the time and had great success.”

Ryan is quite excited about getting back into the class. “I had been looking to get back in the class. I hadn’t lost any of the interest or passion. I have always been interested in the technical side of the boats, was on the technical committee, and was international vice-president for about 15 years, then a bit of a gap, and now back.”

“The costs are high now, but the nice thing is you can buy an older boat like I have done, which is much more economic – about a fifth of the cost.”

He will base the boat in Norway in Hankø, where he is a member, having long had connections there. It is also the venue for the 2021 Scandinavian Gold Cup and World Championship. “The boat will be well used and campaigned. We just have to work out a program and priorities for the season.”

Ryan thinks it is important that the class has events in Australia.

“There has generally been quite a big gap between events down here. It used to be every six years. Between 1991 and 2005 it was 14 years and between 2015 and now, another 15 years. And it’s only been driven down to the Southern Hemisphere because of the international class status, in that we should be sailing in the southern hemisphere every now and then.”

But he is encouraged by the growth here in the lead up to these championships. “The last 18 months to two years has been very good. I am impressed the way they have got people into the class to buy boats.

Martin [Cross] has done an excellent job and it’s good to see someone like John Bacon in the class. It’s also been very nice to see all the Evolution and Classic boats done up and racing. We hope that it will keep going after the event.”

Racing at the world championship continues on Sunday with two more races scheduled and a kinder forecast. The series concludes on Monday 13 January.