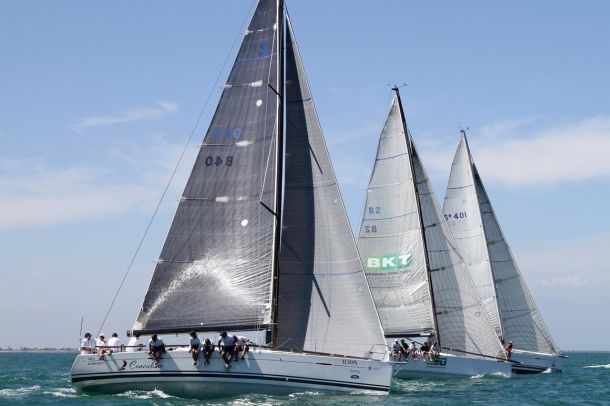 Super Saturday at the Festival of Sails took every race official and volunteer in charge of marks and mark boats out on Corio Bay and the outer harbour. The piecemeal afternoon breeze eventually settled in from the south east and freshened up to 16 knots. Before that the race management teams were kept on their toes moving courses and shortening and postponing some races until a fair track could be laid.

A later start after yesterday’s passage race from Melbourne let crews enjoy a slow morning. There was just enough wind for the cruising fleets to begin their passage race off the host Royal Geelong Yacht Club, but not enough on the outer harbour for the scheduled start of the first windward/leeward race of the Rex Gorell Land Rover Rating Series.

Bob Cox’s Nine Dragons made the most of delay. Two crewmen, Mitch White and Scott Hinton (Scooter), from the current IRC class B Australian champion, were dragged behind the motoring Sydney based DK46 standing on a floor board rather than a wake board.

The one-design division is gearing up for its Australian championship in Sydney next month and the Victorians at the Festival of Sails are pushing hard to iron any last wrinkles from their performance before at least five of them travel to Pittwater for the three-day championship. The class will vie for the newly dedicated Lou Abrahams trophy, in honour of the class stalwart who passed away last year.

Brenton and Jen Carnel’s Phoenix from RGYC has maintained its pointscore lead, four points in the clear of Bruce Taylor’s Chutzpah after the sixth of an eight-race series.

Two Australian yacht club commodores are part of the Sydney 38 fleet. Kate Mitchell from Sandringham Yacht Club (SYC) is a part owner of 38 Degrees South and Ian Murray is this weekend helming his Sydney 38 Cinquante and presiding over the Australia Day long weekend regatta as the RGYC Commodore.

Rob Hanna’s handicap win in the final race four with his TP52 Shogun V four put them provisionally in front Nine Dragons that was on track for boat of the day after scoring a win in the opening one-lap windward/leeward followed up by a second in the established Sou’East 12 – 14 knot breeze. Their fifth in the final late afternoon race moved them down the ladder in division 1 of the Rating Series, incorporating the Victorian IRC and AMS Championship.

At the final top mark rounding in the last race there was a port/starboard incident between Extasea and the division 2 Beneteau, Schuss, that put them both out of the race with cosmetic damage, rather than structural, and injured crew on Schuss. Both were assessed by first aid officers on the dock and required no further medical attention.

Paul Bucholz’s DK46 Extasea was dipping behind Schuss when the crew realised the mainsheet was snagged and they weren’t able to bear away. They clipped Schuss’ port stern, breaking the Beneteau’s life lines and their own spinnaker pole and bow sprit. Schuss’ owner Denis McConnell (RBYC) along with Barry Elliott were hurt when they were thrown against the wheel during the collision.

South Australian entries are noticeably up on previous years and two of the three top placegetters in division two hail from that state. Jason Ward’s Concubine continues to dominate the division heavily populated by Beneteaus. Shining Sea (Andrew Corletto) is third and sandwiched in the middle is Mike Welsh’s Wicked from across the bay at SYC.

Conditions are likely to freshen tomorrow with W to WSW winds 20 plus knots and much cooler temperatures expected for Melbourne’s closed waters.