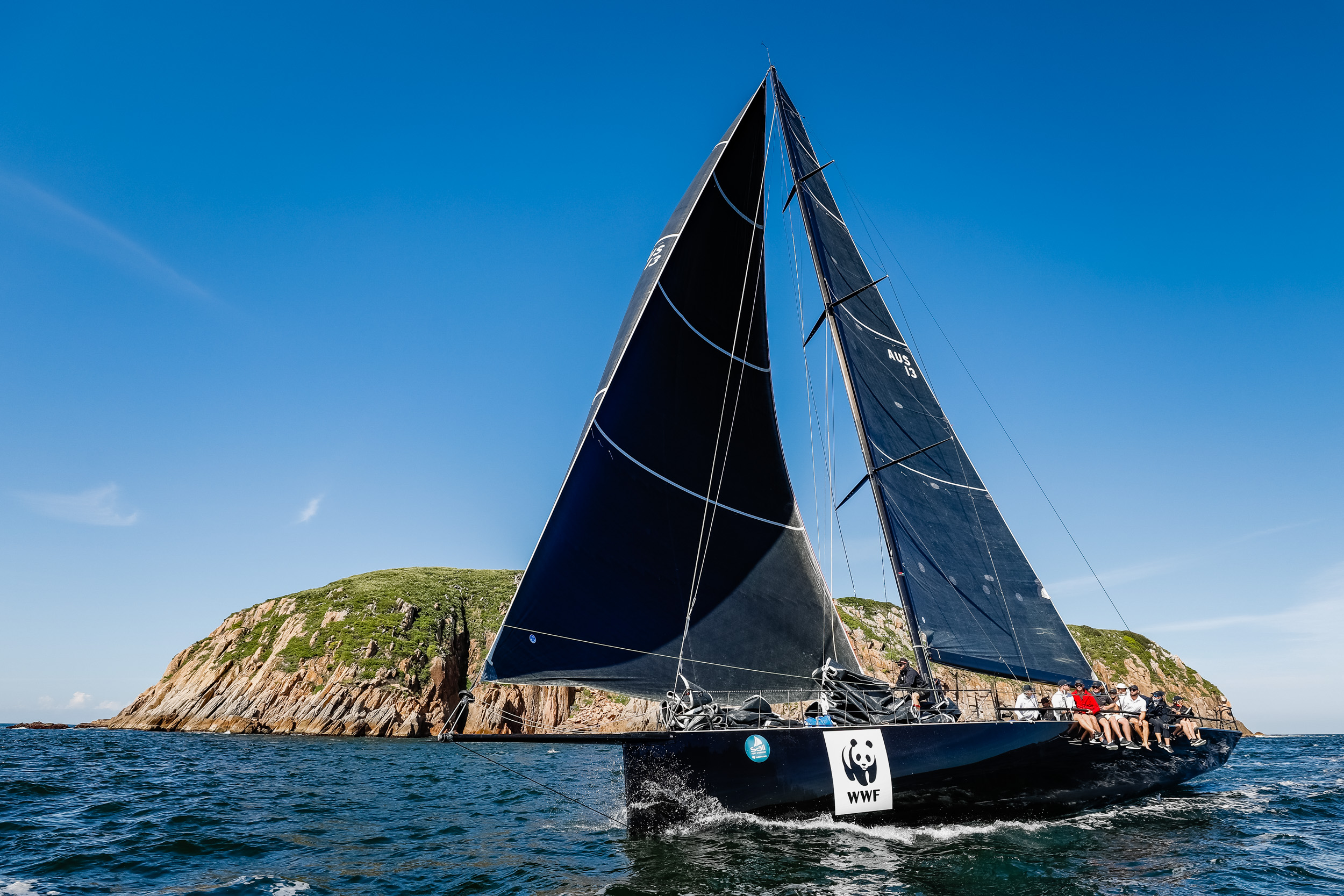 Tomorrow we honour the Anzac legend and our selfless service men and women, but today was all about remembering the legacy of Roger ‘Hicko’ Hickman, Sail Port Stephens mentor and ambassador, with a Super Saturday ‘Sail-ebration’ involving around 180 boats great and small.

They were packed five-deep off Nelson Bay break wall, spinnakers radiating in the sunlight if not exactly straining under the late-morning westerly. There were four more starts offshore in the Fingal basin for the NSW IRC Championship and Performance Racing Division 1 thoroughbreds.

All headed seawards for what is traditionally the Broughton Island passage race.

The Performance Cruising Division 1 crews were the most willing, bowsprits and gunwales clashing like titans as six yachts aimed for one pin. They will remain nameless as no serious damage was done.

All that was lacking was the breeze, which turned to a breath before dying altogether. And then we sat or, in the case of Finn sailors, lay – basking in the autumnal sunlight – while a sou’easterly gradually got its act together.

Unfortunately, a percentage of the yacht fleet failed to finish within the time limit. The IRC Division 1 boats were least affected, thanks to their inherent power and large sail wardrobe. Whisper was first home, albeit its lead was whittled away when it fell into a drifter near the finish. It allowed Sebastian Bohm, owner of Smuggler, to take the handicap victory from Celestial and Ichi Ban.

“It was a tough day out there, but we managed to find some good shifts and pressure,” Bohm said. “The other guys built up quite a big lead on the first leg to Broughton, but we somehow managed to pull them back – it was the comeback of the year. We had to fight for every puff basically. The crew work was flawless, and the tactics were perfect today.”

The Smuggler team are happily ensconced in two waterfront houses at Salamander Bay and, according to Bohm, are absolutely loving it: “It’s our favourite regatta on the calendar and we’ve booked this set-up for the next five years I think,” he said.

With two races still to be sailed tomorrow, Ichi Ban leads Celestial and Smuggler in the overall battle for the NSW title – their points after four races being 7, 9, 11 respectively.
In Division 2 IRC, Gerry Hatton’s Mat 1245, Bushranger, made its move up the scoreboard with a race win today. However, a second placing by Soozal allowed it to retain the lead. Checkmate of Hollywood holds third place overall.

It was a familiar story, though, in Division 3 IRC as Sofarr again proved so good. The Farr 31 is on five points, 12 clear of the Adams 10 Get It On.

On ORCi, Ichi Ban, Soozal and Cicero are leading their respective divisions.

The NSW title for the Australian Sports Boat Association appears to be heading to south Lake Macquarie with Malcolm Dean, as there is only a final day of windward/leewards still to play.

Dean’s Shaw 650, The Stig, won a fourth consecutive windward/leeward race today before having a rare slip in the passage race, defeated mostly by the fickle breeze.

A 2-1 by Wild Huntress, owned by Michael Brierley, edged the Elliott 7 into a tie with Re-Heat, Luke Ratcliff, on 15 points.

Newcastle yacht Mako, skippered by Tim Dodds, maintained its lead in Performance Racing Division 1 after posting a fourth today, the gap to Challenge and Corum closing slightly. The One Design 35 Khaleesi took the day’s honours.

The Fareast 28R Chicken Lips from the NSW town of Wagga Wagga had its best day in Performance Racing 2, winning the start and weaving through the tricky offshore conditions to claim victory. Gerrit Veenemans, aboard Fareast 28R, slipped into second place and now has a comfortable lead over Bullwinkle and Wilding.

In other results, the three Performance Cruising divisions are being led by Quest 3, Jab and Joji. None is comfortably home, however, as each division has more than 20 entries.

Off-the-Beach Regatta
Racing in the Olympic-class Finn division of the Off-the-Beach regatta didn’t get underway until after 3pm – and ultimately only one race could be completed before the light faded.

Crews lazed in the sun until a 5-8 knot sou-easter finally filled the bay. Sydney sailor Rob McMillan on NB Sailsports, and Pittwater’s Matt Visser, aboard ANIKA, then took first blood in the state-of-origin battle with a strong Queensland contingent. David Bull’s Wombat was the best of the northerners in third. McMillian’s winning margin was over 2 minutes in a race of 45-minute duration.

The Windsurfer fleet had more luck with the NSW Slalom Championship as ‘pumping’ is allowed. Winners were Mel Webb in Lightweight, Chris Thompson in a tie-break in Medium-Weight, Matthew Hinault in Heavyweight and Simon Jones in Super Heavyweight.

All classes and divisions are expected to fare better tomorrow as a 12-14 knot sou’easter is predicted to hit overnight. The Windsurfers are planning a marathon sail to Shoal Bay while the Finns will focus on windward/leewards.

An Anzac service is scheduled for Nelson Bay, Port Stephens, around 10.30am, while an impromptu dawn service is being planned by some of the veterans among the crews and race committee, starting 6am in Apex Park opposite d’Albora Marina Nelson Bay. All competitors and their families are welcome to attend.