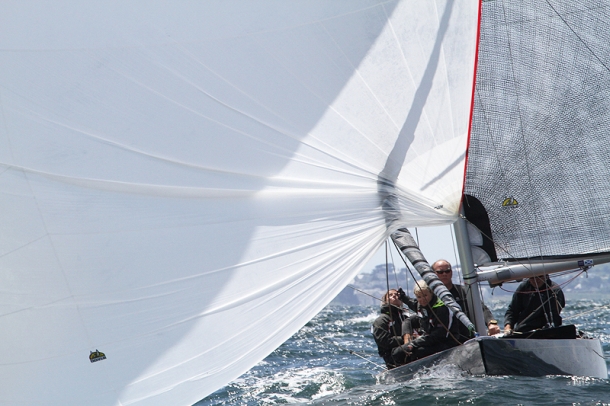 The opening day of the International Six Metre World Championship, being hosted by the Société Nautique de La Trinité sur Mer from 28 May to 5 June, produced sparkling conditions and spectacular racing for the 42 strong fleet of 19 Modern and 23 Classic Sixes. The south-westerly wind gradually built from around ten knots to mid teens ensuring that the race committee was able to run all three of the planned races.

The quality of the fleet is without doubt exceptional as can be seen from the extraordinarily close mark roundings and finishes and the mixed fortunes on the results sheet. When asked about his 3, 12, 3 scoreline for the day which put him into fourth place overall in the Open Division, Bertie Bicket, owner of GBR86 Scoundrel One, summed the day up neatly saying “It's tight out there. One tiny mistake and you're history so we need to do better”.

Leading the Open Division overnight is Steve Kinsey in CAN111 Blade, who opened the day with a bullet and followed up with a second and then a fourth place. Sailing FRA117 Junior, Yan Marilley's fortunes were on the up as he opened with a sixth place before going on to take victory in races two and three, putting him one point behind Blade overall. Hugo Stenbeck's Sophie slots into third place overall, five points behind Junior and five ahead of Scoundrel One.

You might think that winning two out of three races on the opening day would guarantee you a place in the top three overall, but as Ben Mumford and the crew of KC10 Gallant found out in the Classics fleet today, that isn't always the case. Their day got off to a bad start with a seventeenth place and despite redeeming themselves with two wins they nonetheless find themselves in sixth overall tonight and very much looking forward to the completion of the sixth race and the introduction of the discard.

Leading the Classic Division is Lars Guck's N71 Flapper who sailed very consistently for a 4, 4, 3 score which gives them a single point lead over their nearest rival, Eric Jespersen at the helm of Peter Hofmann's US83 Llanoria. The two boats had spent the entire day battling it out with Llanoria finishing immediately behind Flapper on race one and two before claiming a second place in the last race of the day. One further point behind is GER68 Lillevi, helmed by Andreas Huabold who won the opening race and followed up with and eight and fourth to count thirteen points overall.

Andy Postle, whose GBR22 Titia lies fourth in the Classic Division summed up the mood of the sailors perfectly, saying “You can't make any mistakes or two boats or three boats will squeeze in. You can't miss a shift. It's just great now that there are so many competitive boats that are really, really close. Historically there have been three or four, but there are now ten or fifteen so there's no fighting back in.”

There were a number of boat on boat contact incidents on the race course today and Sir Peter Harrison's K12 Nada, being helmed this week by Peter Holmberg, found herself on the wrong side of two of them. Following protest Nada was disqualified from both races two and three.

The most serious of the incidents involved a port/starboard at the start of race three between Nada, Andrew Webster's USA45 Bob Kat II and Thomas Camus's FRA6 Normand III. The port tack Nada collided with the starboard tack Bob Kat II, who in turn was forced into Normand III. Although the jury subsequently disqualified Nada, sadly it was Bob Kat II that was the ultimate looser as she suffered very serious damage to her bow which is likely to prevent her from racing again in the championship.

Tomorrow's forecast is for southwesterly winds of up to 30 knots which puts racing in doubt. The race committee intends to hold its daily briefing at 09.00 at usual and will update the competitors on the situation then.

The programme calls for up to eight races and these are currently scheduled to be sailed between now and Thursday. Even if racing cannot take place tomorrow the race committee has the option to run up to three races on Wednesday or Thursday, however, if eight races have not been completed by Thursday night there will be racing on Friday. The regatta concludes with a Gala Dinner and Prize giving on Friday evening.