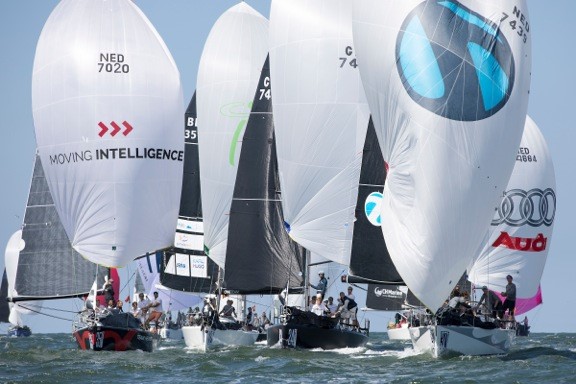 Under bright sunny skies and a gentle 10 knots of wind, many entries in the 86-boat fleet from 15 nations made it out to the race areas today to test the waters of the North Sea in preparation for tomorrow's opening round of races in The Hague Offshore Sailing Worlds 2018.

Conditions were perfect to test not only the racers and their inshore racing skills, but the race committee team members led by Peter Anink on their skills of handling a highly-competitive fleet.

Paolo Massarini was out on the course area today for Class C, which this week will have the largest group of boats on the starting lines: 49 entries.

“The starts were very tight, and we had numerous General Recall signals before we started using other tools to keep them in control,” Massarini said. “This will be a very challenging week for the sailors and the committee in this class.”

Thomas Nilsson, who is sailing this week with the Jon Sverre Hoiden's Sinergia 40 Sons of Hurricane from Norway commented, “About 2 knots of current at a 45-degree angle to the start line made it interesting.”

Nilsson and crew are competing among the 27 entries in Class B, which is sharing a course area with the nine entries racing in Class A.

“Because we have two systems used in the scoring it's a little hard to know where you are relative to your competitors, but you just have to sail your best and I think as we race we will get used to it,” Nilsson said.

Yet for tomorrow's start of the Championship there will not be short windward-leeward course races like today, but a single start for one of two required long distance races in the event format.

With a light wind in the forecast once again, it is unlikely the race course will bring the sailors more than 25 miles out from shore. The exact details on the course will be discussed tomorrow at 0830 AM in the Skipper's Briefing for a start planned at 11:00 AM.

Regardless of the light wind forecast, the strong turnout and excellent organisation by event staff prompted ORC and IRC officials in the Opening Ceremony to be very upbeat about the historic significance of this World Championship event.

Bruno Finzi, Chairman ORC, said, “ORC was founded almost 50 years ago as a service to the sailors, and for the past 20 years we have helped organise world championships. We have been working towards a unified system, and are pleased to have this championship represent a good start towards this goal.”

“Along with our partners in IRC UNCL, we too are pleased with the efforts made to having this combined World Championship event,” said Michael Boyd, past Commodore RORC

“There were many that have worked hard for this, and we thank them all.”

Standings in each class will be calculated based on the measured speed over the previous tracking interval of 15 minutes, and this used to estimate a finish time and thus an estimate of placing in both ORC and IRC scoring. It will not be exact, as the wind and conditions will change throughout the race, but it does give a sense of how well the teams are doing.

Tomorrow's offshore race can be followed live at: https://offshoresailingworlds2018.com/tracker.