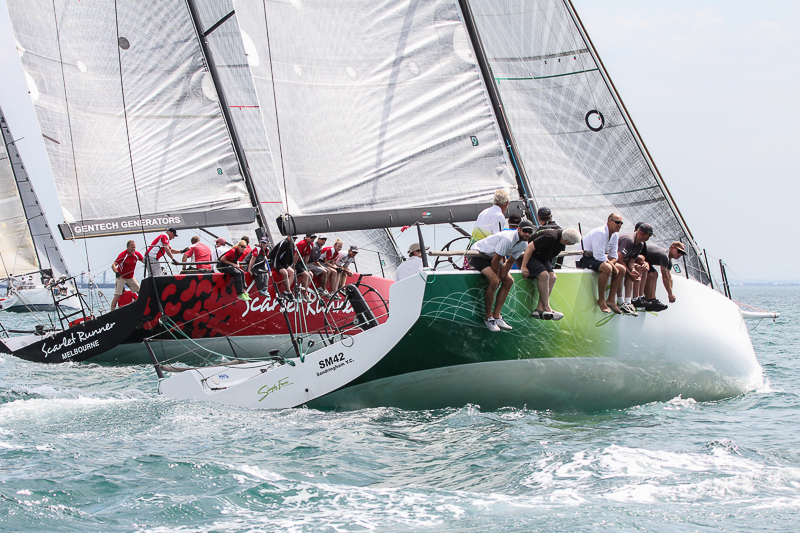 Day one of the Club Marine Series. Photo Alex McKinnon.

The Club Marine Series is well known for filling Port Phillip Bay with a sea of sails and smiles. It prides itself on being the premier keelboat regatta in Victoria and this year with 105 entries across the blue and white series it is no different. This regatta marvels in its ability to attract and cater for sailors of all levels and experience; bringing back veterans and welcoming some new faces is all part of the experience.

The 2015 Club Marine Series started on a high with day one bringing warm weather, flat seas and a comfortable 8- 10 knots (with most welcoming the occasional gust to 12 knots.) This ideal spring weather was the perfect way to shake off the cobwebs and transition back into racing. The light winds made for some close racing creating minimal degrees of separation across the various classes. Day one saw intense competition between old rivalries who were giving everything they could to start the season with a win.

The Division 0 fleet had a safe but close start with Scarlet Runner calculating and executing their start plan perfectly. Yet, unknown to them Primitive Cool had a charging start and managed to lock Scarlet Runner to Leeward taking them out past the top mark layline. This bold move gave the other Div 0 boats a chance to play the shifts and close the gaps to these two boats. Despite ‘banging the corner’ Primitive Cool narrowly rounded the top mark first, followed closely by Scarlet Runner. Third to round was 2014-15 IRC winner, Simply Fun, and with a near textbook perfect hoist they took off downwind. IRC winner for Day One, Div 0 went to John Paterson’s Farr 45 ‘Rush’. After a tough battle Primitive Cool was narrowly beaten with line honours going to Scarlet Runner. Owner of Scarlet Runner, Robert Date, recapped the day:

“We're happy with our performance, especially since I haven't sailed on Scarlet (Runner) since March and we're a new team. We had clean teamwork today yet had a problem with the jib halyard on the seconding (top mark) rounding, which slowed us down a bit. We look forward to improving over the season.”

With the shifty northerly conditions, the majority of Division 1 were all vying for a pin end start. Leading the charge was Alan Woodward’s, ‘Reverie’ who managed to lead the fleet and round the top mark first by carefully playing every shift on the first upwind.  A close battle between top competitors Wicked, Ikon and Schuss on the first upwind made for a tight top mark rounding. Reverie sailed a smooth downwind thus defending their position for the rest of the race. They received line honours and secured their IRC win.

Trapezing, symmetrical and asymmetrical spinnaker work were just a few of the variety of skills seen across Division 2 and 3 today. With the start of the season comes new positions, new crew members and new boats such as Chris Byrne’s ‘Imaginer’ now competing in the IRC division. With any of these new additions, teamwork becomes most important and so was evident with all boat manoeuvres. Division 2 and 3 proved to be a really competitive fleet with even slight mistakes costing positions. Congratulations to Langford Spencer’s ‘Moneypenny’ taking first place in IRC Div 2 and Tim Campbell’s ‘Recycled Reputation’ taking the podium in IRC Div 3.

Blue Division were in full force with 29 boats registered and all of a mixed variety of classes ranging from the S80s to the Beneteau First 50.  The Blue Division’s ‘Around the Sticks’ course was set directly in front of Royal Brighton Yacht Club making it a great spectacle for any nearby land- lovers. For some, the Blue Division is a great way to get on the water with family and friends and race in a relaxed atmosphere, for others it’s a way to spend some alone time; seen by some boats fantastically solo sailing around the bay. Blue Division seems to work however you want it to – if you like champagne sailing, then set your boat for comfort, if you want a little more competition, get to the front of the pack and join the others!

On all, today was a fantastic sight for sailors and spectators alike and created a great base for the races to come. Here’s to hoping the rest of the 2015 Club Marine Series provides the same great quality racing.