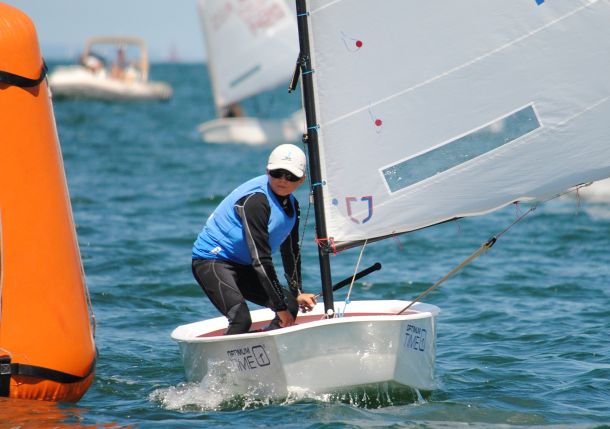 With one race to make up for the Open Fleet after yesterday’s light, variable and cloudy conditions, there were high hopes for a better day two of the Victorian Optimist Championships. But after the fleets were released from the beach just before 9am, what breeze there was dropped out and sailors were returned to shore. It was not the start the organisers were hoping for.

However, as the cloud dissipated and the temperature increased, the breeze moved into the south-south east and freshened to around 10 knots at noon – providing excellent racing conditions for the afternoon. Green and Intermediate Fleets both completed their scheduled three races and the Open Fleet did four to bring them in line with the other fleets.

Queen of the Green Fleet this weekend is Millie Harvey from Mornington Yacht Club. She has not put a foot wrong, winning every race over the past two days and now holds an 11 point lead. Second and third positions are also unchanged from yesterday, with William Ross (BRYC/RBYC) is 3 points ahead of Lara Johnson (AWYC).

Daniel Links from Royal Prince Alfred Yacht Club holds a 3 point lead in the Intermediate Fleet, ahead of James Jackson (MYC) and Zac Heyes (MMYC) following by another 3 points. While race wins in this fleet have been shared around five different competitors, the sailors in the podium positions have consistently posted results inside the top ten.

In the Open Fleet, today saw a three-way tussle at the top of the table between overnight leader Jack Ferguson (NSC/WSC), Steven Case (RGYC) and Cole Tapper (WSC). Each had to drop a poor result from today but Cole Tapper has been the most consistent over the last two days of racing. He leads Steven Case by 2 points, with Jack Ferguson another 2 points back. With three races still to sail, any of the top three have a good chance of claiming the Open Championship.

“What a fantastic day”, said Principal Race Officer Kevin Wilson back onshore this afternoon. “It has been worth the waiting. We had perfect racing conditions today, we have enough races for a regatta and the drops have kicked in. Anything we get tomorrow is a bonus.”

Also enjoying the sunny afternoon and moderate breeze today, were twenty six participants in the Tackers Carnival, scheduled to coincide with the Victorian Championships. The colourful OziOpti fleet sailed to Elwood and back taking in the Green Fleet racing along the way.

The forecast is for a cloudy day tomorrow with a moderate breeze and some rain in the afternoon, but hopefully all fleets will finish their full program of nine races and have their presentations before conditions deteriorate.