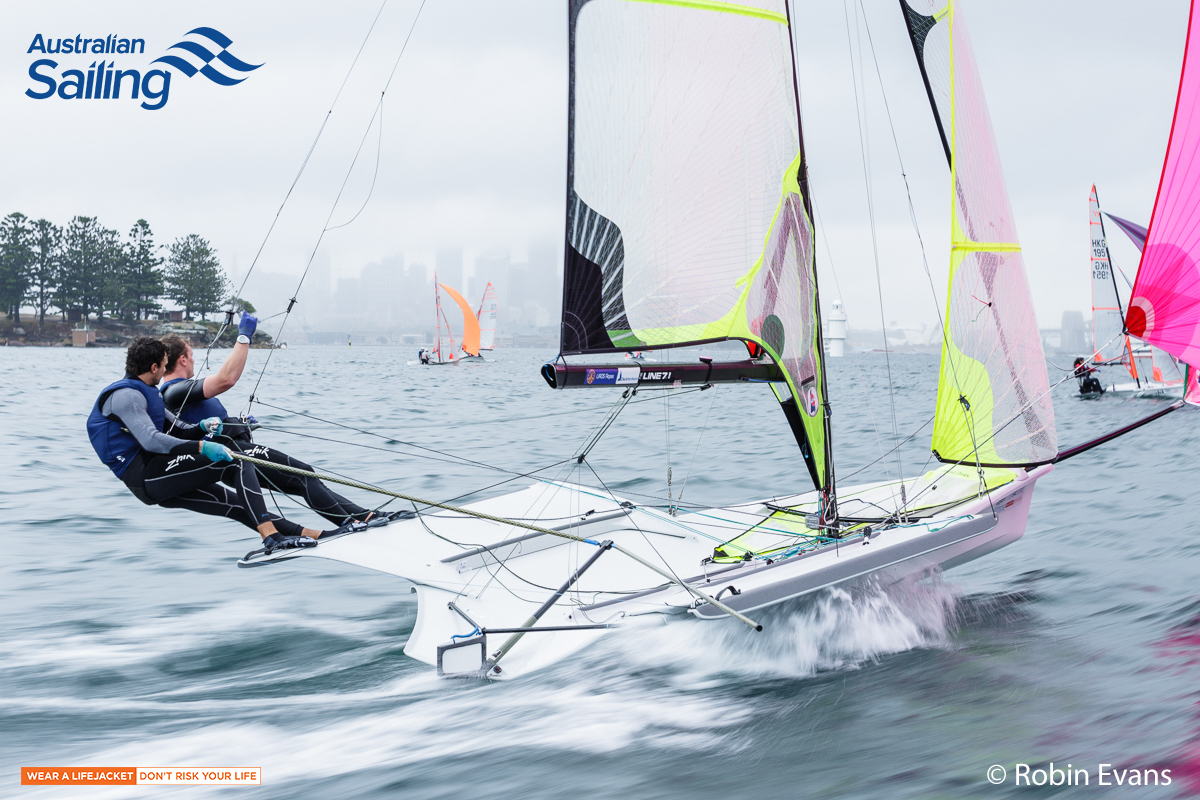 The sun came out to play today on the Sydney Harbour and while the breeze drifted in and out, class champions were decided and Flying 11s, Optimist Fleets, Nacra 17s, Sabots, Pacers and Tasars all started their Sail Sydney campaigns.

The 470 Men and Women, 420s, Laser Radial and Laser 4.7 sat tight until the AP flag was lowered mid-morning, before setting out on the Harbour for their final day of racing at Sail Sydney 2016.

The 420 class was won by Otto Henry and Rome Featherstone after a solid regatta from Woollahra Sailing Club duo.

“It was pretty fun out there today,” Otto said. “Conditions were tricky, light to moderate and really shifty. We had to get the work done at the start of every race on build on it from there.”

The Belgium sailors controlled the Laser Radial fleet for the majority of the regatta to come away with the quinella.  Emma Plasschaert sailed to victory winning three from four races today with Maite Carlier finishing second. Belgium Sailing Team Coach, Will Van Bladel said that the girls performed well over the duration of the regatta.

“It’s the first time both of the girls have sailed on the Harbour and they managed the conditions really well,” Will said.

“Both Emma and Maite have really enjoyed sailing, it’s a fun regatta for them and I told them to have fun which they have.  I told them ‘it doesn’t matter how many waves or ferries are on the Harbour, as long as you have fun.’”

In the Laser 4.7 Finn O’Dea from Fremantle Sailing Club took the win after starting the final day in third position, Finn picked the shifts to come out on top.

“Today I just tried to stay above the other competitors,” Finn said. “I started the day in third and had to really get on the shifts and get into the pressure.

“I had to go out right from race one and I finished second in that race and first in the next two.  With each pressure today came a different shift and the first person to get on that shift really got ahead and luckily I got on that shift first.”

In the Opti Intermediate fleet, Joel Beashel won two from three races to lead the fleet into the final day of competition tomorrow.  Daniel Links has a narrow lead in the Opti Open fleet hoping to build on his 2015 Sail Sydney performance where he finished thirteenth.

In the Flying 11s Tom Dawson and Luke Sullivan made the most of conditions today to win two of their four races.

The afternoon session was short lived as the breeze died-out but the 49er, 49er FX, 29ers, Lasar Standard, Finn, Nacra 17, Sabot, Pacar and Tasar sailors all got out on the Harbour.

The Western Australia Sailors reigned supreme in the 49er and 49FX with Caitlin Elks & Hayley Clarke winning the 49er FX and David Gilmour & Joel Turner taking out the 49er crown.

“We didn’t get a lot of racing in but it was still really good to be at the top of the fleet in varied conditions,” Joel said.

“The light winds were good because the light teams are a bit more competitive and racing is really close,” David added.

The 29er fleet again attracted a large number of competitors with Henry Larkings and Miles Davey winning the regatta.  Larkings and Davey sailed consistently across the regatta to come away with the win.

In the hotly contested international Laser Standard fleet, 2015 Champion Giovanni Coccoluto successfully defended his crown.  Giovanni was slow to start the regatta but came back in the final day of racing to win four points clear of his nearest rival.

“Sailing was really tough here all week, very different from Melbourne last week,” Giovanni said.  “I really like Sydney and I really wanted to come back and to defend my title which I did and that makes me really happy.”

Jake Lilley capped off a classy regatta with in the afternoon session to be crowned Sail Sydney 2016 Finn Champion.  After finishing in the top ten at the Rio Olympics and winning the Sailing World Cup in Melbourne last week, Jake will have a short break driving back up the east-coast to Queensland, before heading to Bermuda.

“I finally decided to take my post Games holiday and head up to Lake Macquarie and sail some faster boats and have some fun,” Jake said.  “I head to Bermuda on January 2 to get back to work with Team Artemis.

“We had quite a few Finn competitors at Sail Sydney and its always cool to race on the Harbour, anyone can win any race so it’s always challenging.”

The Nacra 17, Sabot and Pacer fleets all set sail today for the first at Sail Sydney 2016. In the Nacra 17 fleet, Paul Darmanin and Lucy Copeland showed good form winning two from three races.

“It was Sydney Harbour at its trickiest today, up and down and you had to keep your head out of the boat but it was lovely weather and good racing,” Paul said.

“Lucy and I have been sailing the Nacra together for four year and it’s great to see a Nacra fleet at an event in Australia, the first time at Sail Sydney.”

The Sabot fleet was strong and managed to squeeze in one race before the breeze gave way. Cameron Burt won the first and only race of the day.

In the Pacer fleet, sailors are competing for the NSW State Pacer Championship as well as Sail Sydney honours. Dallas Yan and Jarrod Khaw took out the first and only race of the day.

Our Moth sailors didn’t get any racing in due to lack of breeze but they will be back tomorrow to foil on the Harbour.

All results can be found HERE