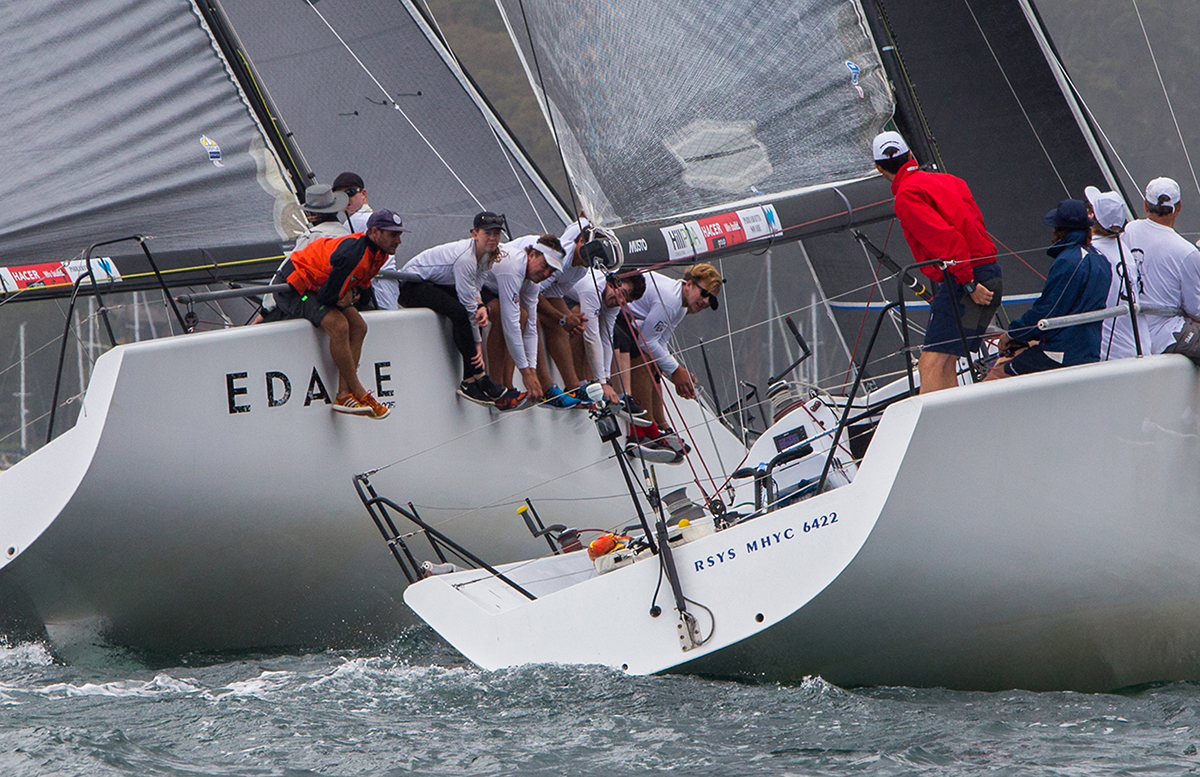 “Yesterday we felt we had a speed edge, today we couldn’t find it but in the end we won four of the eight races and we are happy with that result,” Hill said dockside at Newport’s Royal Prince Alfred Yacht Club.

“It was really difficult to get consistency out there. We went into the final race knowing we’d hunt for Edake, basically cover them and make sure they never split from us, and keep it conservative. I’ve been sailing against Jeff for over 20 years and he did a great job, and it was terrific to see Good Form get boat of the day,” Hill added.

Edake is pronounced ‘Ed-ache’, a play on the word headache, which is exactly what Carter, his new tactician this season, Steve Thomas, and the crew were to Estate Master as they set about dismantling the latter’s handy day one lead. Team Edake remained consistent as results swung wildly for many boats in the up and down pressure on an inshore course – until race eight when they too felt the pain of a high score and worse, finishing two places behind Estate Master which cost them the overall win.

“As of yesterday Estate Master was clearly in front and we pulled that back many points to get in front by race seven and set up a good finish. Hats off to Martin and his team. We are a Corinthian team so we are pretty happy we can match it with the pro boats. I’m sure at the next regattas they aren’t going to let us go anywhere.”

After races five and six in cool 8-12 knot sou’easterly winds the breeze went to the east then clocked back to the south, with plenty of flux in both strength and direction. The oscillations frustrated the RPAYC race committee trying to set a fair course between Morning Bay and the east of Scotland Island though they did create opportunities for the Farr 40 crews in the second half to get back in the game.

Third overall went to Rob Pitts’ Double Black from Victoria which suffered a mid-series crisis and was off the dais until their closing second and third results. Double Black, Good Form and Zen all finished on 32 points, instigating a countback to break the deadlock.

The combined talent aboard Joe de Kock’s Newcastle based Farr 40 Good Form hit their stride in race seven, beating the fleet around the short course followed by a second in race eight to be named boat of the day.

The next event for the Farr 40 fleet is the Newcastle One Design Trophy January 21-22, 2017 which leads into the NSW State Title in February and National Championships: John Calvert-Jones Trophy in March.

“The Newcastle Cruising Yacht Club is really excited about the January Farr 40 regatta; it’s a big deal to host such a prestigious fleet,” said de Kock, who owns a nearby business. “Also it will be nice to sail offshore for a change.”