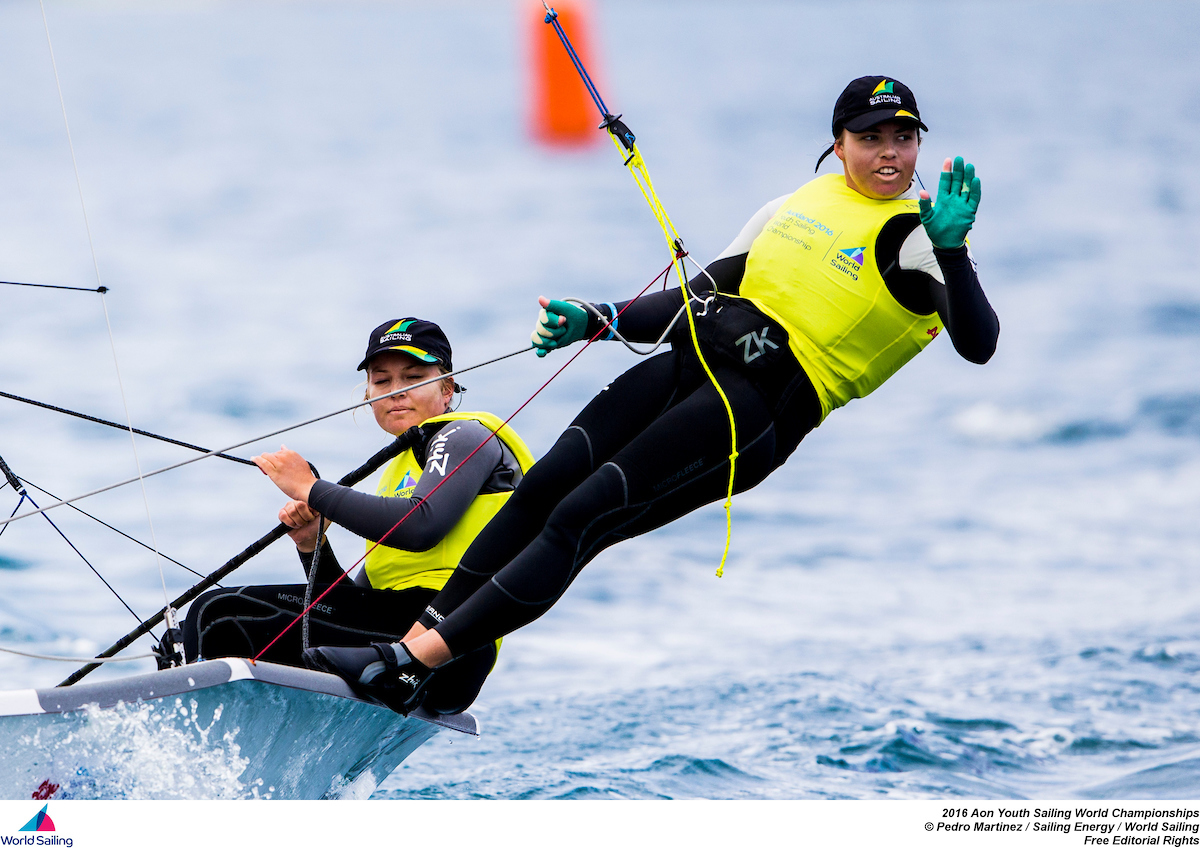 Gold medals tumbled in Auckland at the 2016 Aon Youth Sailing World Championships as five winners were confirmed with a race to spare.

The French multihull sailors secured the inaugural Nacra 15 gold, the Australian 29er girl's won their first ever regatta, USA's 420 boys dieting and dedication paid off and both Israel and Great Britain took the RS:X titles.

USA's Wiley Rogers and Jack Parkin guaranteed themselves a gold medal with two wins from two races on day four. Explaining the key to the success Rogers said, “It took a lot of dedication, dieting and it hasn't really set in yet.”

Rogers and Parkin have been in tune all week and are definitely in sync when it comes to the celebration, as Parkin excitedly says, “Eating! We have had to stay light for the boat so we have been dieting pretty hard but now we get to eat whatever we eat. Pancakes, waffles. Whatever we can get our hands on.”

In second placed and with a 2-8 for the day, Israel's Ido Bilik and Ofek Shalgi will now have to take on Argentina's third placed sailors, Fausto Peralta and Martin Arroyo Verdi for the silver medal.

Nacra 15 pair, Tim Mourniac and Charles Dorange (FRA) lead the fleet by 23 points, enough of an advantage to win gold. The victory also handed crew Dorange his third Youth Worlds gold medal having won in the SL16 with Louis Flament in 2014 and 2015.

After coming ashore to congratulations from their team mates waiting to launch for the afternoon session, both boys had the same word to sum up the win, “It's amazing,” said Mourniac before Dorange echoed, “Yes. It's amazing.”

Mourniac continued, “We managed to win this regatta as we were good at all the things we could control like tactics and speed.”

Talking of his third gold medal Doranage said, “I'm so very happy to win every medal I can.”

Italy's Gianluigi Ugolini and Maria Giubilei, USA's Romain Screve and Ian Brill and Belgium's Henri Demesmaeker and Isaura Maenhaut will have a three way shoot out on the final day to claim the other two medals.

The French were understandably excited by their win but Australia's Natasha Bryant and Annie Wilmot were still focussed and business like ashore, “We have had a pretty solid and consistent regatta,” said Wilmot.

Despite the focus, when it finally hit home that they would walk away from Auckland with a Youth Worlds gold medal the relief was evident, “We are still pretty shocked actually,” said Wilmot, “we haven't ever had a regatta win in the two and half years we have been sailing together.

“We have had a lot of seconds and thirds so it's nice to finally get a win.”

The 29er girl's have secured their gold with an unassailable 22 point margin back to the second placed Aleksandra Melzacka and Maja Micinska of Poland. New Zealand's Greta and Kate Stewart will fight it out with the Polish girls for who will take home silver and bronze.

Both RS:X titles were wrapped up in Auckland as Great Britain's Emma Wilson took the girl's title and Israel's Yoav Omer took the boys.

Wilson claimed a bullet in the final race of the day, to go with her third and fourth to clinch the gold medal. For the Briton there was always a driving force in the background, a score she had to settle, “When I came fifth at the [RS:X} Worlds I was so upset, but this makes up for it. I always wanted a win, and to do it is amazing.”

With gold out of sight, Israel's Katy Spychakov will concentrate on keeping hold of silver with a seven point cushion over Yue Tan (CHN) and Maria Belen Bazo (PER) heading in to the final day.

While Spychakov will go for silver, her male counterpart has got his gold in the bag. Yoav Omer has been an example of consistency, taking a stylish victory on the penultimate day with three wins from three races to give him an impressive 29 point lead.

On his win Omer said, “It's an incredible feeling and I am so happy to win before the last day. I can't really describe how I feel now. For sure my friends and family will be happy.”

Sil Hoekstra (NED) is in second place and will look to hold on to a ten point lead over Mack van den Eerenbeemt (ARU) who pulled himself back in to contention with three second places.

The 2015 girl's 420 champions, Poland's Julia Szmit and Hanna Dzik have an eight point lead over Alexandra Stalder and Silvia Speri (ITA) to help them defend their title in the final race. Also in contention for a medal are Olivia Belda and Marina Arndt (BRA), Violette Dorange and Camille Orion (FRA) and Kathryn Hall and Ashton Borcherding (USA).

The final races are scheduled for 09:55 local time on Tuesday 20 December out of the Torbay Sailing Club.