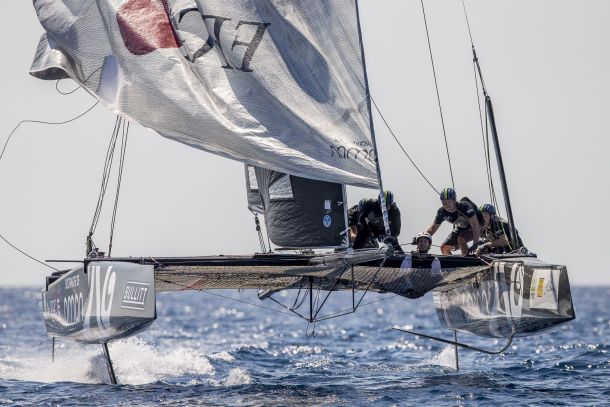 Civitavecchia’s wind gods smiled on competitors during the Trofeo di Roma’s final day. The wind peaked at 10 knots, adequate not only to get the entire six race schedule completed, but also for the nimble GC32 catamarans to get fully foiling on the conclusion to this, the 2015 Bullitt GC32 Racing Tour’s penultimate event.

For the top three boats the day was one of mixed fortunes, the leaderboard initially showing Sultanate of Oman leading Alinghi and Spindrift racing, respectively of Bertarelli siblings Ernesto and Dona, tied three points behind.

After a disappointing Saturday, which saw Spindrift racing drop from first place to third, skipper Yann Guichard turned his fortunes around by winning today’s opening race.

However Alinghi then countered with not just one win, but three in row causing them close to one point behind Sultanate of Oman. The Swiss were fully on a roll…until disaster struck: A miscommunication over whether or not they should be carrying a guest caused them almost to miss the start of race five.

As skipper/helm Morgan Larson admitted: “We put our shutters down and talked about the next race and the next thing we know our coach boat comes up to us and says ‘look over there’ and there was a minute to go…” They made the start, albeit late and on the back foot, but then retired from the race when it became apparent that the warning from their coach boat amounted to receiving outside assistance. They subsequently filed a protest which was overturned.

At the start of the final race the scoreboard was almost back to square one with Alinghi and Spindrift racing tied, albeit now four points behind Sultanate of Oman. All it would take would Alinghi/Spindrift racing to win and Leigh McMillan’s Omani team to finish fourth or worse… In the event it wasn’t to be. As Sultanate of Oman mixed it up with her rivals, Alinghi was put out of the running when she was OCS and was obliged to slow to let the competition overtake her. 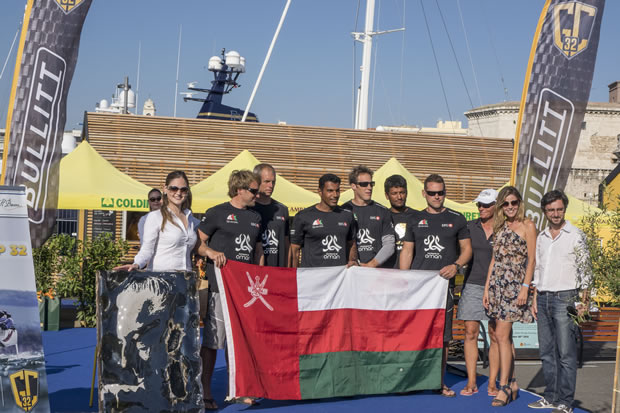 While Sultanate of Oman maintained the lead throughout today, skipper Leigh McMillan observed: “It did get handed to us a little bit, but we were still going well – we had a string of seconds and a third and we were still in the lead going into the penultimate race. We are happy. I am pretty exhausted, but the crew pulled us through,” he concluded, paying tribute to Pete Greenhalgh, Alister Richardson, Nasser Al Mashari and Ed Smyth.

Being able to go foiling fully delighted crews and corporate guests, the Bullitt GC32 Racing Tour being the first occasion when the latter have been able to experience what it is like to race on board foiling catamarans.

Morgan Larson was bitterly disappointed by today’s final two races, especially after his team had been on a roll and poised to relieve the Omani team of the lead. Although this overshadowed the outcome, the Californian skipper was otherwise pleased by their performance. “It was tricky and the guys did a super job until I let them down by not seeing the signals and the last OCS. Otherwise it was a fantastic day for the team.”

Skipper Yann Guichard was also upbeat, with Alinghi’s results in the final two races allowing Spindrift racing to finish second overall. “It was a good day of racing, even though it was up and down for us. We were foiling and had good speed and all the boats are really close – anyone can win a race.”

Despite a last minute venue change, Civitavecchia rewarded the Bullitt GC32 Racing Tour with foiling conditions on two of four days with the final prizegiving held this afternoon at the Terminal del Gusto food festival, that supported the event.

“It was good that we had some more breeze on the last day,” said International GC32 Class President and ARMIN STROM Sailing Team skipper Flavio Marazzi, thanking the local organisers Ventana Group and the rest of the Italian event’s supporters. “At least we could foil from time to time, which is what it is all about on these boats.”

The next event is Marseille One Design, over 30th September-3rd October. Marseille is renown as a venue able to provide big conditions and with them a dramatic conclusion to the 2015 Bullitt GC32 Racing Tour.