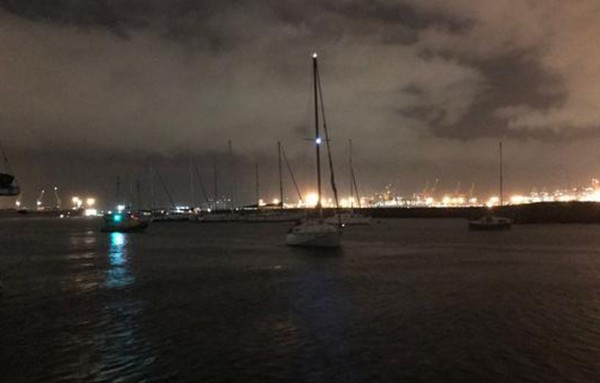 DURBAN – A sudden rain storm and a sudden change in wind speed and direction to a 40-knot southwesterly wind saw a number of boats get into difficulty on Sunday late afternoon around Durban, the National Sea Rescue Institute (NSRI) said.

NSRI Durban duty crew were activated at about 5pm by the Transnet National Ports Authority (TNPA) following a request for assistance from the yacht Tequila Sunrise, run aground on the north breakwater at the Port of Durban with three people on board, NSRI Durban deputy station commander Andre Fletcher said.

While NSRI were launching two sea rescue craft, Megan II and Eikos Rescuer II, the harbour pilot boat Lufafa went to assist the yacht and was able to pull the yacht off the breakwater and tow her to the navy mooring safely. The owners would assess the damage and NSRI may assist to tow her to the Point Yacht Club moorings later, he said.

NSRI were diverted to respond to assist the yacht Four Years at the entrance to the harbour and needing assistance in the strong winds. A police sea border control boat reached the yacht and took her under tow and towed her to the international yacht moorings.

At the same time, the sea rescue craft Megan II diverted to respond to assist the yacht Magenta with three crew on board – two men and a woman. They had been on an afternoon cruise on motor power when the storm caught them and their single motor was unable to cope against the sea conditions, Fletcher said.

NSRI rendezvoused with them four nautical miles off-shore of the Moses Mabhida Stadium and took them under tow and they were towed to the Point Marina.

During these operations the NSRI sea rescue craft Eikos Rescuer II responded to assist the harbour tug boat Fleur du Cap reporting a service boat, a rubber duck, dislodged from their vessel during the storm. The rubber-duck, unmanned, was swept away and missing somewhere in the vicinity of the entrance to the harbour.

NSRI located the rubber-duck with the centre console washed overboard but still attached, and the sea rescue craft towed the rubber-duck to Fleur du Cap to be returned. After all operations were completed no further assistance was required.