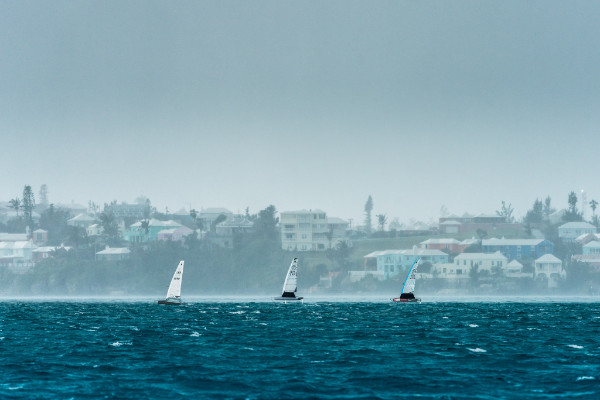 Greenslade finished 1 point ahead of local James Doughty while Benn Smith, the youngest competitor in the fleet at 18 years of age, was 11 points further back.

“It’s a strange win, considering we only had three races, but it was fun,” said the 27-year-old Greenslade, who is a director of the Endeavour Community Sailing Program, a legacy of the America’s Cup Endeavour program. Previously, he won national championships in the Optimist Class, 420 Class and match racing.

Racing was cancelled today because the wind on Great Sound was blowing a steady 25 knots with gusts approaching 40 knots. With the Bacardi Moth World Championship scheduled to begin Monday, Principal Race Officer David Campbell-Smith felt it was an easy decision.

“There really was no reason to send anyone out today. It’s just too windy,” said Campbell-James.

Even if racing had been held, Greenslade wasn’t sure he would’ve been able to race. He had troubles yesterday with the bow-mounted wand that helps control the hydro foiling characteristic that is the hallmark of the Moth class.

“The wand was sticking at a certain point due to some resistance and it wasn’t reacting the way I wanted it to,” Greenslade said. “I don’t feel like I sailed that well yesterday considering the boat wasn’t performing as well as it usually does, but it was fun being out there. The fleet is so strong, the Worlds should be a very tough regatta.”

British sailor Paul Goodison, the favourite to win his third consecutive Moth world championship, won the regatta overall with the low score of 3 points. Another British sailor, Ben Paton, placed second and Matthew Chew of Australia was third. The Bermuda Nationals was an open regatta but the title of Bermuda National Champion could only be awarded to a Bermudian.

The Moth World Championship and Bermuda Nationals are made possible with the support of title sponsor Bacardi Limited, the largest privately held spirits company in the world that produces and markets internationally recognized spirits and wines.