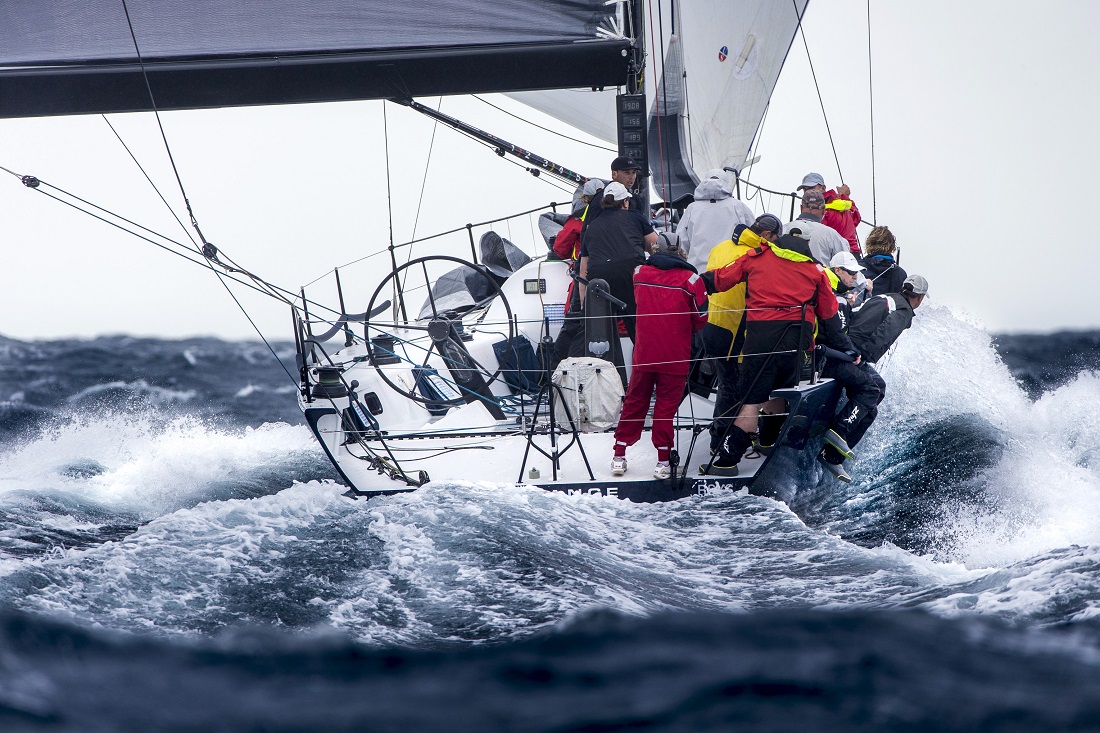 More rain and confusing conditions on the final day of the annual Sydney Harbour Regatta, hosted by Middle Harbour Yacht Club, but in the end, those who could run the gamut of conditions succeeded.

Among the 21 divisions and 226 competitors was world-famous American yachtsman, Paul Cayard, who was at the helm of Karl Kwok’s TP52, Team Beau Geste. Another big name, Kiwi Gavin Brady called tactics. It wasn’t difficult to understand their dominant IRC performance in IRC Division 1. They won every race, with Lindsay Stead’s Yeah Baby/Boatec second overall.

While Kwok is from Hong Kong, the boat is here representing New Zealand. Her crew found the Sydney Harbour Regatta the perfect preparation for the upcoming Australian Yachting Championship later this month.

“This is a great event and was a good hit out before the Yachting Championship,” Kwok’s boat manager, Cameron Ward said. “It was very fresh and very challenging. It was a good way to put the boat and crew through their paces.

McCance and her crew of Sara Ladd and Russell Ford were over the moon. “It’s my first big win as a skipper, so we jumped in the water when we got back to the Squadron,” McCance said. “We had great competition throughout. Yesterday most of us had some damage – we had to jury rig our vang. We had lots of good competition throughout.

“It’s great seeing so many women in the Ynglings. It’s a friendly class and they are very encouraging. We are about 50/50 men and women now,” she ended.

Peter Rozenauer’s Jackal became the J70 NSW champion for 2017. Her owner will be sorry he missed out. Called away on business, 18 year-old son, Nick, steered the boat to victory.

“It’s a real family affair – my mum Anne is on the crew and my 16 year-old brother Alex. Things got a bit heated at times – that’s family,” Nick said laughing. “Only the bowman isn’t family, but he may as well be.”

“The racing was extremely close – especially between us, Juno (Reg Lord) and James (last year’s winner owned by Tim James). It came down to shifts in the final moments of each race.” There was two points between first and second, and two between second and third.

“This is an awesome regatta – over 200 boats – we’ll be here next year. The race committee did an excellent job with all that they had to combat. Yesterday the wind was so high and the sea state was terrible, so they had to move us inside Middle Harbour,” he said.

Craig Mitchell and his Centaurius crew were just too good again, defending the title they have won for the past two years at the Sydney Harbour Regatta, leaving the rest to battle for the minor placings.

Centaurius won two races, adding to a pair of second places and a third. Andrew McPherson’s U2 finished second on countback to Greg Purcell’s Scuttlebutt.

Ed Psaltis has won the Sydney 36 Championship having only recently joined the class after retiring from long offshore racing. Blooded into competitive racing early on, courtesy of his sailing parents, Psaltis recently made the move to round the buoys racing, buying a Sydney 36, and keeping in theme, named her Midnight Rambler.

Psaltis won all but one race, so cleared out on second and third place getters, Saltshaker (Peter Franki) and Alpha Carinae (Damian Barker). Ten boats took part in this competitive series.

PHS spinnaker and non-spinnaker divisions are a major component of the Sydney Harbour Regatta and make a spectacular sight on their long Harbour courses. Ray Parrott (X-Ray) was thrilled to win Spinnaker Division 1, not in the least because his X-332 was the smallest boat in the division.

“It was a great regatta. Very challenging – we saw lots of carnage around us. We didn’t do any damage, but we did have a broach and a Chinese gybe, but nothing broke. It was my first, and hopefully my last,” Parrott said laughing.

“We had some thrilling rides with 30 knots behind us. We sailed well and fought for every race against longer and faster boats,” he said after beating Ian Box’s Toy Box 2 by one point overall after three races. Another local, Patrice Six (Shaun Lane) was third.

“I want to congratulate all competitors and especially my sailing buddy, Ian Box, on winning the X-Yachts division (sailed within the PHS division). I also want to thank the organisers and race officers who did a brilliant job in hard circumstances. They are volunteers and we forget that sometimes,” Parrott ended.

During the afternoon, PRO Denis Thompson commented, “The breeze is all over the place, starting in the south-west, up to 20 knots, but it’s gone right around to the west. When the rain hit, there was no breeze. It’s a disaster on the Harbour.”

The 12th anniversary Sydney Harbour Regatta will be imprinted on everyone’s minds for its high winds, big swells, downpours and scattered rain throughout.

Luke McCall, General Manager for Abell Point Marina, a major sponsor of the Sydney Harbour Regatta took in some of the action today: “What a spectacle, so many boats concentrated in one area – and having the Harbour Bridge and Opera House as the backdrop.

“We watched some starts, then saw sports boats capsize, spinnakers tangling – very tricky sailing. A good test for the strategists,” he said.

“We’re looking forward to welcoming some of these competitors at Airlie Beach to race – or to have a cruising holiday,” added McCall, who enjoyed the close proximity to racing on the Harbour.

Winners will be lauded in style tomorrow evening at the official prize giving at Middle Harbour Yacht Club.

For all the results go to: www.shr.mhyc.com.au