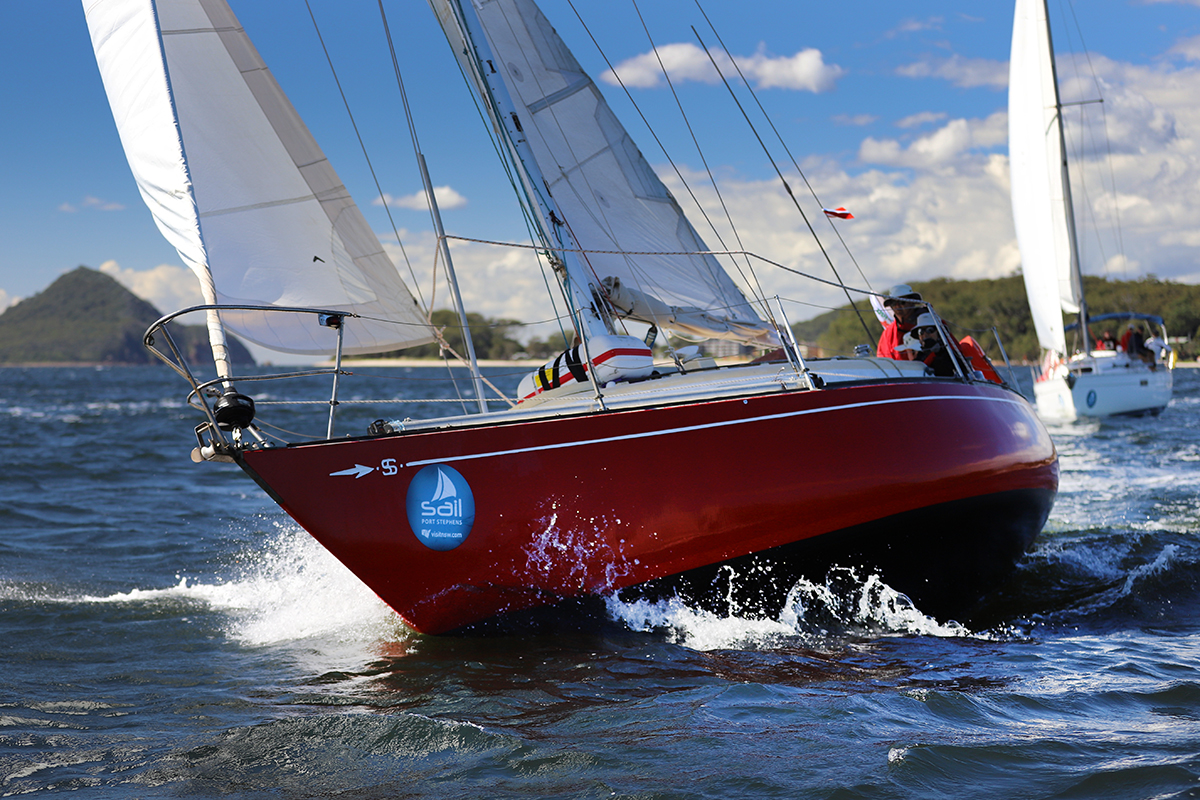 “Sunny with winds 15 to 25 km/h becoming light in the late afternoon” was how the official forecasters optimistically described today’s weather for Sail Port Stephens. At least they were right about the sunshine …

The breeze built to a fresh 20+ knots, with more than a sniff of southerly, and it blew away the chances of some of the fancied frontrunners in the Bannisters Port Stephens Commodores Cup fleet, along with an overnight adjustment of PHS handicaps.

Of course, it also brought other boats roaring back into contention.

Today’s inshore race favoured yachts with longer waterlines and the flexibility to power and de-power as required, with no better example than Little Nico. To its hat-trick of line-honours wins, the Shaw 11 added an overall handicap victory in Division 1.

A fourth placing today allowed it to overtake overnight leader Highly Sprung, a Beneteau First 45, while the Marten 49 Indigo II held on for third despite a 13th today. The podium for Race 3 was actually filled by three less-fancied newcomers – LaTroisieme Mitemps, a Beneteau 50 Sense, from the Hanse 458 Travelling Light and Dehler 46 YKnot.

In Division 2, the consistent Italia 11.98 Cicero held onto its overnight lead after posting an 11th today – again a step down from the 1-2 of previous days. Peter Horne’s Bling finished second overall, while the Bavaria 41 Elusive climbed to third.

While it was so far so good for Sofarr, leading into today’s race, a 19th placing gave the Farr 31 a nervous moment as it waited for the MASRM Liquid Force to finish. Ultimately the two yachts were tied on 21 points, victory going on countback to Sofarr owner Dale Sharp. The Jeanneau Sunfast 3200 Hells Bells claimed third place.

Race 3 honours in this division went to Ca Va, Wings 11 and Escape.

The handicappers caught up with Smoke and Mirrors in Division 4 after it had proven unbeatable in the two previous races. A 23rd dropped them back to second overall, allowing the popular Fareast 28R Chicken Lips to leapfrog them for the series win.

Skipper Mark Hillis hails from the NSW rural town of Wagga Wagga and only gets to sail three or four times a year. He caught the sailing bug after trying a catamaran on his home waters before stepping up to 28R. The Azuree 33fc The Italian Job was third overall in Div 4.